Insurance industry losses from the 14th November magnitude 7.8 earthquake in Kaikoura, new Zealand are starting to be counted, with the Insurance Council of New Zealand revealing that over NZ$900 million of commercial claims have already been filed. 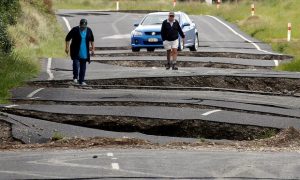 The number only accounts for businesses that have filed claims with local domestic insurance companies, so does not include any claims for losses to assets that were directly insured with offshore insurers.

The expectation is that the final insurance and reinsurance bill from the Kaikoura earthquake could be as high as NZ$5 billion or US$3.5 billion, with a significant proportion of that toll expected to be from business interruption claims.

Also there could be a significant additional chunk of commercial insurance claims that fall to the likes of the major global reinsurance firms, who increasingly offer direct corporate insurance solutions around the world.

Insurance Council Chief Executive Tim Grafton, commented; “It is early days and the figures may change but indications are that there are more than 2,500 commercial material damage and business interruption claims worth more than $900 million.”

Two thirds (65%) of the total $900 million of losses are from the Wellington region which was hardest hit, while Upper South Island saw 25% of the claims, Canterbury 8% and the remaining 2% from other North Island claims.

Figures for residential insurance losses have yet to be released as homeowners have until the 14th February to notify insurers of any claims.

The Kaikoura earthquake is one of the catastrophe events that hit some ILS funds and collateralised reinsurance vehicles during 2016. The extent of any loss to ILS funds won’t be fully understood until the insurance industry loss is clearer.

As the reinsurance industry is still finding out from the Canterbury earthquakes, events in New Zealand can have particularly long tails. This was evidenced again recently as Suncorp pushed more NZ quake claims to its reinsurers.