The reinsurance broker reports that the most pronounced rate firming was seen in loss affected accounts and regions, while more broadly slight price rises or stability were seen in a broader range of classes of business.

The rate rises are the first seen after five years where prices consecutively fell, although there were significant variances across different regions, JLT Re notes.

Ed Hochberg, Chief Executive Officer, JLT Re in North America, explained, “Property-catastrophe rate increases were most pronounced in regions impacted by loss activity, while low single-digit rises or even flat outcomes were more typical for programmes without significant losses.

“Although reinsurers sought to stem margin compression with more substantial rate rises at 1 January 2018, many conceded ground to clients as the date neared, particularly in non-loss affected areas.”

JLT Re estimates that global insured losses for 2017 will be around $140 billion, which it says is the first time that the annual insured catastrophe loss figure has hit this level in real terms.

The magnitude of such losses has driven rates up across many reinsurance lines and regions, but not as steeply as some were hoping as the weight of capital in the sector continues to moderate price movements.

JLT Re tracks property catastrophe rates using its risk adjusted rate-on-line index, which it saw increase by just under 5%. 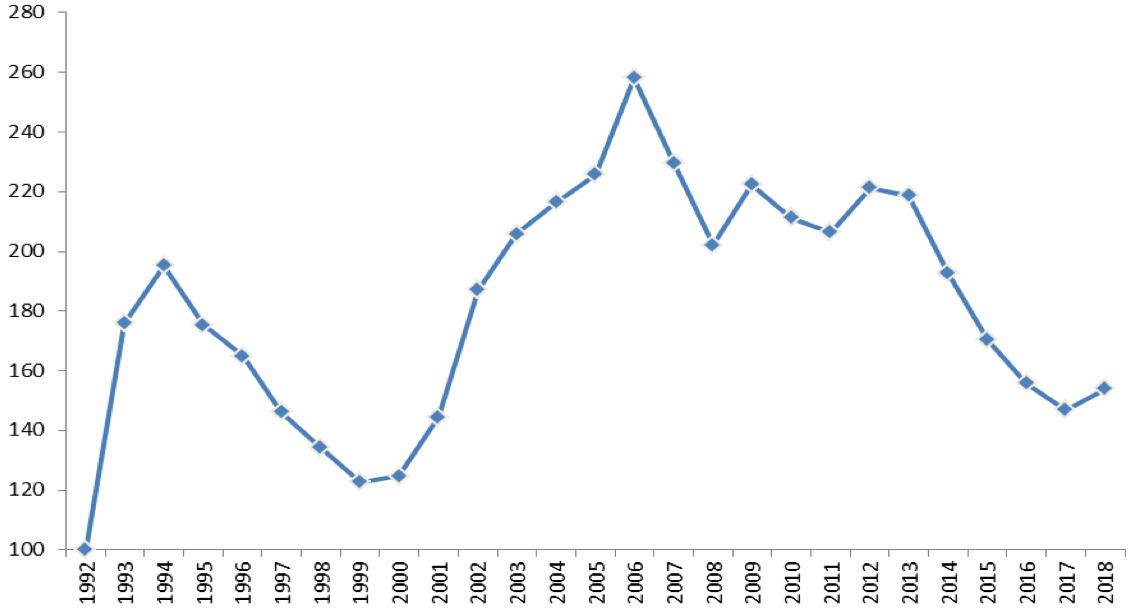 “JLT Re’s Risk-Adjusted Global Property-Catastrophe Reinsurance Rate-on-Line (ROL) Index rose by 4.8% at 1 January 2018, with levels still below those seen in 2016. The highest increases were recorded in the US, with rates renewing flat to up 5% for loss-free programmes and up 10% to 20% for loss-affected business. Flat to moderately up renewals were typical for international property-catastrophe business, reflecting more benign loss activity in Europe and Asia. Even with these increases, the cost of property protection remains competitive with global property-catastrophe pricing approximately 30% below 2013 levels,” Hochberg said.

Retrocession and direct and facultative (D&F) largely saw slightly higher rate increases at the January 2018 renewals, although JLT Re notes that these also fell below early market expectations.

Bradley Maltese, Deputy CEO of UK & Europe, JLT Re, commented, “Despite initial indications that markets would push for more, rates for retrocession catastrophe programmes were generally up by between 10% and 20% on a risk-adjusted basis, with event-based programmes falling towards the lower end of this range. Lloyd’s and global D&F catastrophe business was typically more loss-affected, and this translated into risk-adjusted rate increases of 15% to 25%, sometimes more for badly hit layers.”

In other areas of the reinsurance market it appears that there has been a recognition that rates had declined too far at recent renewals, halting the softening in areas that were not loss affected.

Mike Reynolds, Global CEO at JLT Re, explained the broader effects seen at the renewal, “Impacts spread beyond property lines as higher catastrophe and attritional losses influenced renewals for certain specialty and casualty lines. This coincided with a growing recognition that rates in some of these areas had fallen to levels that tested technical profitability after successive years of declines. As a result, programmes across some specialty lines were renewed as expiring, or with modest rate increases.

“Negotiations for casualty renewals, meanwhile, were balanced by profitability pressures on original business and reinsurers’ desire for higher rates due to the build-up of claims. Loss-free casualty programmes therefore renewed close to expiring levels whilst accounts that experienced losses saw moderate increases. These outcomes were often accompanied by lower ceding commissions.”

The fact rates have risen and stability has been more broadly seen across reinsurance lines will encourage reinsurers and ILS players, but the amount prices have risen remains a disappointment for many, which should see the pressure stay on to enhance  both profitability and efficiency, as the market moves through 2018.