42 billion-dollar severe weather and natural catastrophe events along with the impacts of a particularly costly global tropical cyclone year and higher than average wildfire losses, all aggregated to drive a $90 billion annual nat cat loss to insurance and reinsurance interests, according to Aon. 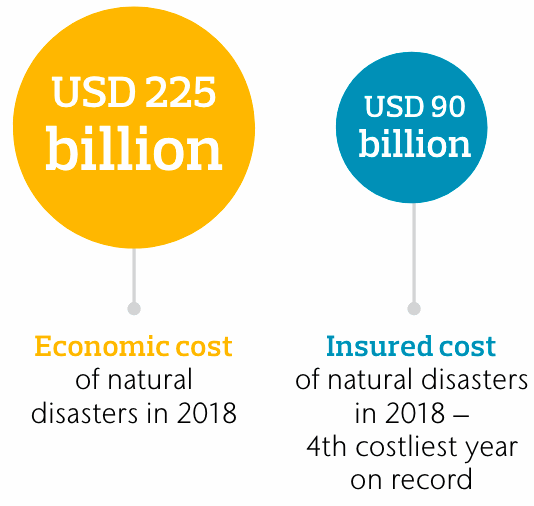 The insurance and reinsurance broker said that the $90 billion of insured natural catastrophe losses make 2018 the fourth highest year on record by this measure.

Economic losses from natural catastrophes and severe weather events around the globe cost the economies of the world $225 billion, meaning that the protection gap, or portion of economic losses not covered by insurance, was 60% which Aon says is the lowest level since 2005.

It was a particularly active year and the fact aggregate reinsurance has been a driver of losses into the ILS fund market is no surprise given the 42 loss events that cost the economy more than a billion each.

But with no really major loss event during the year, it is the combined impacts of global tropical cyclone events and the impact of just under $20 billion of global insured wildfire losses that drove impacts through the insurance, reinsurance and ILS sectors.

Andy Marcell, CEO of Aon’s Reinsurance Solutions business, explained, “2018 was another active year for global natural disasters. While there was not a singular “mega” catastrophe event, there were 42 billion-dollar events which aggregated to a slightly above-average year.

“The re/insurance industry continues to withstand the payouts backed up with USD595 billion of capital but focus on managing the cost of changing climate and weather events by helping to close the protection gap.”

Steve Bowen, Director and Meteorologist at Aon’s Impact Forecasting team, added, “Among the takeaways from the events of 2018 was the recognition that catastrophe risk continues to evolve. The complex combination of socioeconomics, shifts in population and exposure into vulnerable locations, plus a changing climate contributing to more volatile weather patterns, is forcing new conversations to sufficiently handle the need for mitigation and resilience measures. Natural disasters are always going to occur. How well we prepare can and will play a key role in future event losses.”

Aon provides data on the combined effects of 2017 and 2018 and when you see the enormity of the figures it is no surprise that there have been significant loss impacts for reinsurance, retrocession and ILS investment strategies.

Aon says that the two-year period drove a huge $653 billion of economic natural catastrophe and severe weather losses, while the insured tally for the two years was $235 billion.

As we explained recently, the industry took roughly $200 billion of losses across an 18 month period and hence the significant ramifications of these losses on the market are no surprise.

But despite the costly aggregation of insured losses over that period, Aon notes, ” Despite the significance of the losses, the re/insurance industry remains flush with available capital to handle the high volume of payouts. Given the more than USD600 billion in capital that currently exists, it would likely require a substantial-sized event or two in a single year to lead to any sizable shift in the overall insurance market.”