Natural catastrophe events cost the global economy an estimated $232 billion in 2019, while the insurance and reinsurance industry is estimated to have paid for roughly 31% of this at $72 billion, according to broker Aon.

Aon’s figure of a $72 billion insurance market loss in 2019 comes from some 409 natural catastrophe events, the broker said.

But Munich Re, one of the largest reinsurance firms, estimated the same at just $52 billion, coming from a huge 820 catastrophe events.

While Swiss Re, another reinsurance giant, pegged the 2019 natural catastrophe insurance industry loss at just $50 billion.

The reinsurers figures are just preliminary, but were delivered only a month or so ago.

Differences aside, what Aon’s figures tell us is that estimates of insurance market losses can differ dramatically and that it is the brokers that tend to have the highest (for 2018 Aon said $90bn, Munich Re $80bn and Swiss Re $79bn).

Aon’s estimate of $232 billion of economic losses from natural catastrophes in 2019 is some 3% below the average annual loss for this century and 20% lower than the previous decade.

The estimate for private sector and government-sponsored insurance losses of $71 billion is a full 6% higher than the century average, Aon said.

It puts the protection gap, between economic and insured losses, at 69% in 2019, which Aon says is the fifth-lowest since 2000.

The two most expensive catastrophe events were the Japanese typhoons, typhoon Hagibis and typhoon Faxai, which Aon estimates as having caused $9 billion and $6 billion of insured losses respectively.

Andy Marcell, CEO of Aon’s Reinsurance Solutions business, commented on the data, “Following two costly back-to-back years for natural disasters in 2017 and 2018, there were several moderately large catastrophes but strong capitalization has allowed the re/insurance industry to comfortably manage recent losses. However, as socioeconomic patterns further combine with scientific factors such as climate change or extreme weather variability, the potential financial costs at play are only going to increase so building resilience is key.”

Aon also noted that the years 2010-2019 marked the costliest decade on record, as economic damage from natural catastrophes and severe weather events reached a huge $2.98 trillion globally, with Asia-Pacific accounting for 44%. That’s a massive $1.19 trillion higher than 2000-2009.

During the last decade private and public insurance markets paid out $845 billion of losses for these events, with the U.S. accounting for 55% alone.

That suggests that only 28% of economic losses from natural catastrophes around the globe were covered by insurance over the last decade, driving home that there is much more for the insurance, reinsurance and insurance-linked securities (ILS) market to do on penetration rates and closing this protection gap.

Steve Bowen, Director and Meteorologist at Aon’s Impact Forecasting team, stated, “Perhaps the biggest takeaway from the last decade of natural disasters was the emergence of previously considered ‘secondary’ perils – such as wildfire, flood, and drought – becoming much more costly and impactful. Scientific research indicates that climate change will continue to affect all types of weather phenomena and subsequently impact increasingly urbanized areas. As the public and private sectors balance an understanding of the science with smart business solutions, this will lead to new advances that lower the physical risk and improve overall awareness.”

Then table below shows the top-10 economic catastrophe loss events of 2019. 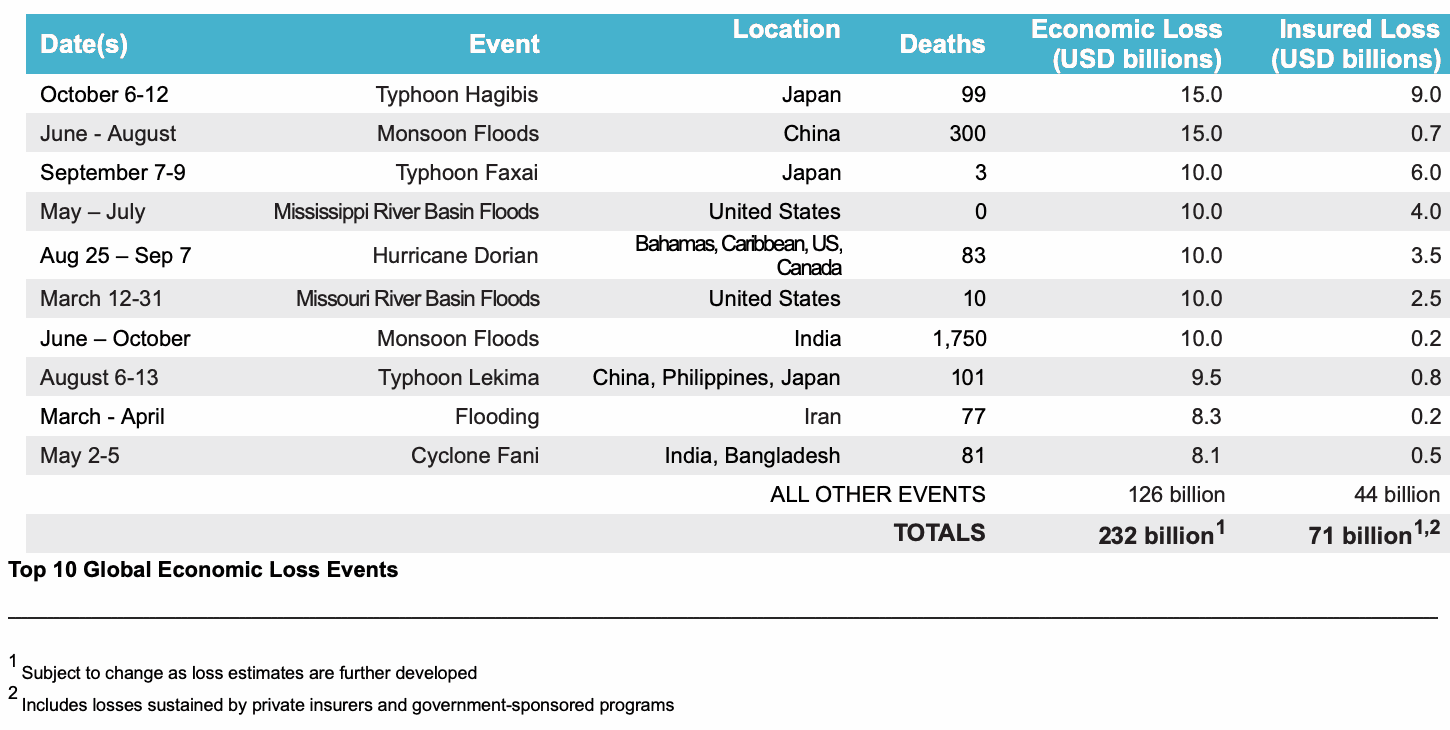