Pricing in the insurance-linked securities (ILS) and catastrophe bond market in the third-quarter of 2016 remained in line with recent quarters, says Munich Re, highlighting that there has been no visible sign of further downward movement in risk spreads since year-end 2014.

Cat bond and ILS issuance in the third-quarter remained strong and was actually one of the most active Q3s in the market’s history, as highlighted by reinsurance giant Munich Re in its latest ILS report, and explored in the Artemis Q3 Catastrophe Bond & ILS Market Report.

“Overall, ILS pricing in Q3 remains in line with previous quarters; no further downward movement in risk spreads has been visible since the end of 2014. We expect this environment to prevail in the remaining month of 2016,” said Munich Re.

At the beginning of the second-half of 2016 reinsurer Swiss Re noted the tightening of cat bond spreads in H1, as a high level of investor demand combined with a lack of new issuance, pushed down pricing in the sector.

At the same time, others in the space reported that spreads were at their highest for four years in Q2 2016, as although the volume of deals may have fallen in the period, the more risky nature of the deals met investor demand for higher returns.

And now, reinsurance giant Munich Re has said that having witnessed no further downward movement in risks spreads since the end of 2014, it expects this trend to continue throughout the remainder of 2016, suggesting pricing in the sector for the final months of 2016 is likely to be relatively stable.

As you can see from the chart below, taken from Munich Re’s latest ILS market report, on an indexed and risk adjusted basis cat bond spreads have been relatively static since the end of 2014, albeit with fluctuation from quarter to quarter. 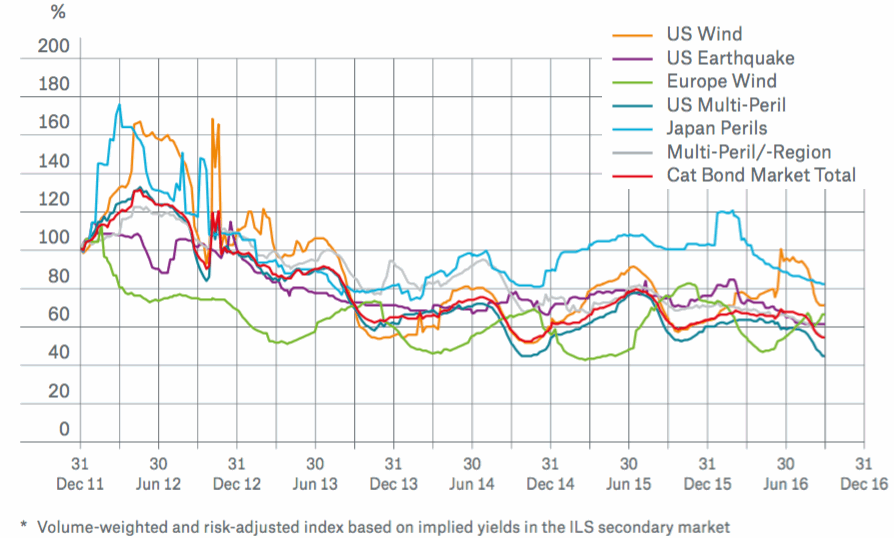 Pricing in the ILS sector has undoubtedly and inescapably come under pressure from broader insurance and reinsurance industry headwinds, as well as providing pressure back onto traditional reinsurance rates.

As evidenced by the high level of issuance in the third-quarter, which helped the market grow from the end of Q2, despite returns being down in the space when compared with previous years, the ILS investor base remains disciplined and eager.

But, while investors do appear willing to assume insurance and reinsurance-linked risk in return for diversification and low-correlation, they are not willing to do so at any price and a level of stability does seem to have emerged.

Munich Re expects pricing in the sector to remain in line with Q3 for the remainder of the year, and continued relative stability in terms of risk spreads for cat bonds should result in continued, and strong investor appetite.