Global reinsurance firm Swiss Re has said today that it believes the repricing of insurance-linked securities (ILS), such as catastrophe bonds, as in line with the rate hardening seen across traditional reinsurance.

Swiss Re believes that there is further for ILS rates to firm up as well, with catastrophe bond pricing already said at a seven year high by the company (something we’ve been documenting in real-time with our charts and data) and it believes further positive price movements for cat bonds are ahead.

The company expects that the catastrophe bond market will benefit from a continued shifting of the ILS investor base, with investors expected to allocate funds to the cat bond segment at the expense of collateralised reinsurance.

Of course, this trend has been ongoing since around the second-half of 2020, as investors increasingly looked to the well-documented, relatively transparent and named peril coverage of catastrophe bonds as preferable over less transparent private ILS and collateralised reinsurance.

That shift continues, Swiss Re believes, which should bode well for cat bond market growth as the capacity will be there to support a cat bond issuance pipeline that continues to build as the second-quarter approaches.

Swiss Re also believes that capacity could be tighter for collateralised reinsurance for a time, which it says could help to keep up pressure under retrocession and reinsurance rates at the upcoming renewals.

However, as we explained earlier today, we’ve spoken with a significant number of investors wanting to allocate to ILS at this time in recent weeks.

Yes, there is certainly a desire to have more catastrophe bond product available among investors, but there are also larger investors who want higher returns than a portfolio of cat bonds can currently offer, at least at any scale, and so will look to collateralised reinsurance and retro instead.

The real answer to driving cat bond activity significantly higher remains lowering costs of issuance as well as the effort involved in sponsoring the deals. They remain far more complex, time consuming and challenging for re/insurers and corporates, when compared to traditional reinsurance and other forms of risk transfer.

If the market could lower the frictional effort and cost associated with cat bonds, then the market would surely explode, as more and more cedents would place cat bonds in their reinsurance towers.

Swiss Re believes that the alternative capital market is “bifurcating”, as investors strongly favour cat bonds and sidecars (co-investment alongside a reinsurer) over collateralised reinsurance.

Swiss Re is so bullish on catastrophe bonds right now, that it believes that collateralized reinsurance is set to shrink over the next few years and cat bonds take that market share. 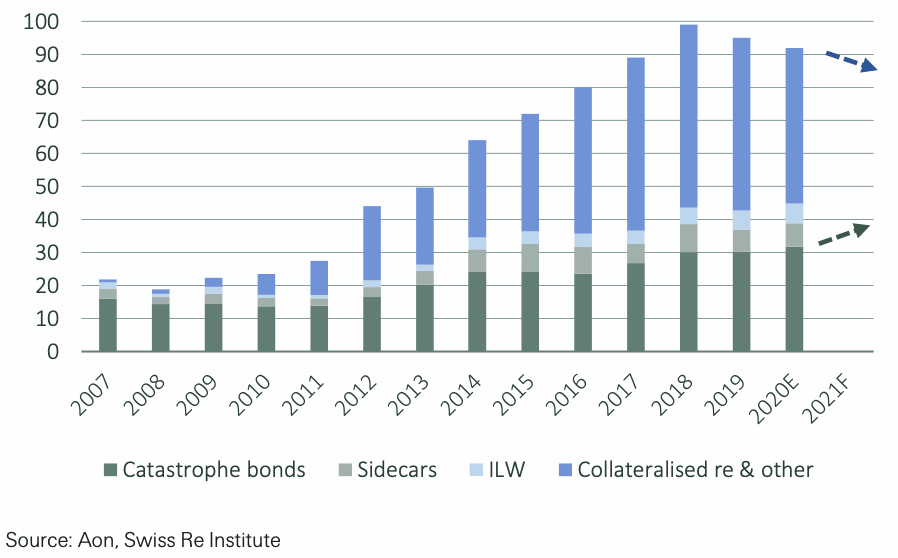 The chart above shows how Swiss Re believes the ILS market and alternative capital in reinsurance will shift over time, with more gains expected for catastrophe bonds.

“Declining fund flows into CR (collateralised reinsurance) are causing a reduction in overall reinsurance capacity that is not yet offset by the growth in cat bonds and sidecars. This is contributing to tightening in the retrocession market and is also a factor in the overall rate hardening in reinsurance. We expect rate hardening momentum to continue throughout 2021, with increases in both traditional reinsurance prices and cat bond multiples.

“This will likely continue to drive funds into cat bonds and so prolong the dichotomy in AC in the short term,” Swiss Re explained.

Swiss Re notes that the average multiple of catastrophe bonds at launch to market has been on the rise, reaching its highest level in 2020 since 2013.