ILS perils to broaden, non-standard structures to increase: Munich Re

Despite catastrophe bond and insurance-linked securities (ILS) issuance subsiding in the second-quarter of 2016, investors in the space continue to be exposed to a broader range of perils, a trend that reinsurance giant Munich Re expects to continue in the future.

Global reinsurer Munich Re has highlighted the reduced momentum in catastrophe bond and ILS issuance in the second-quarter of 2016, which according to the Artemis Deal Directory and the Artemis Q2 2016 cat bond and ILS market report, totalled $1.624 billion.

But despite the notable contraction in issuance and the resulting reduction in the overall size of the outstanding cat bond and ILS space at the end of Q2, “investors’ exposure to a broader range of perils has grown in recent years and this broadening of perils is expected to prevail in the future,” explains Munich Re in its latest ILS market update.

The reinsurance giant states that U.S. wind and earthquake risks remain the most prominent perils in cat bond and ILS issuance in 2016, so far. But as highlighted by the chart below, a broader range of perils, both catastrophe and non-catastrophe by nature continues to shape overall market issuance. 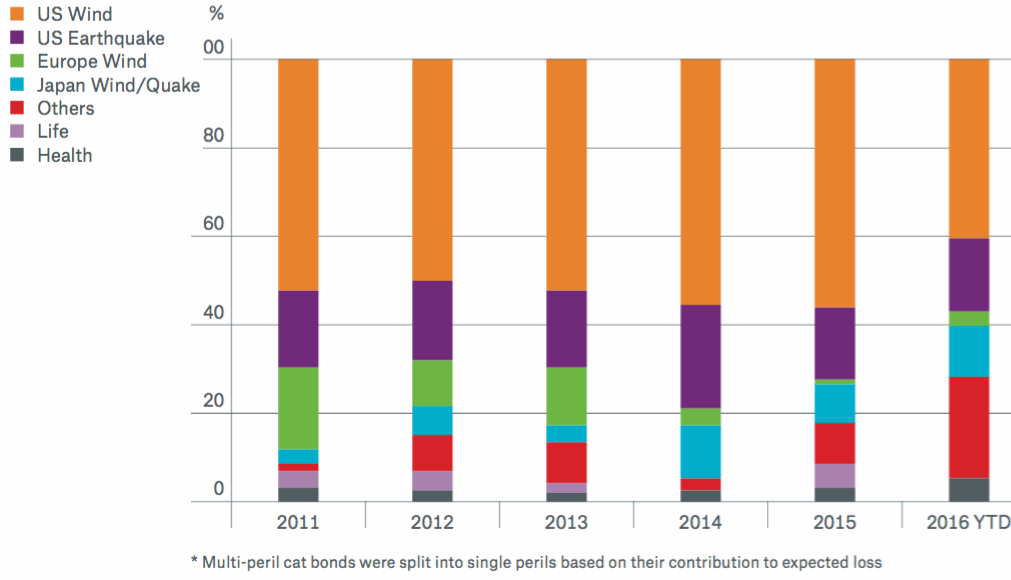 As the cat bond and ILS marketplace has expanded it has matured into a sophisticated asset class, where investors in the space are more and more willing and demanding to understand the underlying exposures and assume insurance and reinsurance-linked business for a broader range of perils.

Regarding catastrophe exposures, issuances like Panda Re Ltd. (Series 2015-1) provided investors with some China earthquake diversification, a first for the marketplace, while prolific cat bond sponsor USAA’s Residential Re issuance platform now appears to routinely include some more exotic coverages, in meteorite impact and volcanic eruption.

Interestingly, in more recent times the cat bond and ILS sector has welcomed some innovative, pioneering issuances that cover non-catastrophe exposures, and which provide investors with further diversification within an asset class that’s diversifying in itself, against their broader investment portfolio.

United Guaranty (AIG) returned to the market in the second-quarter of 2016 with its second Bellemeade Re Ltd. issuance, a $298.6 million transaction that covers mortgage insurance risks. Furthermore, large primary insurer Zurich sponsored Operational Re Ltd., a $222 million deal that essentially provides capacity to protect an insurance policy that covers the operational risk exposures of investment bank, Credit Suisse, another first for the marketplace.

However, Munich Re notes that while recent issuances have included non-cat exposures, “it is not yet clear to what extent such transactions represent demand of the broader ILS space.”

While it may be unclear if the recent inclusion of non-cat exposures in the cat bond space signals demand for such products in the wider ILS marketplace, the success of the transactions does suggest that capital market’s investors’ are keen to assume diversifying, and innovative risks, which should lead to further market growth.

Furthermore, the more deals such as Bellemeade Re, Operational Re, China Re and so on come to market and complete without any issues, the more likely other potential sponsors are to consider utilising the capacity and structures of the ILS space to protect non-cat exposures, and also more exotic and new catastrophe exposures.

Moving away from the broadening of perils and regions, Munich Re highlights that a notable shift towards indemnity trigger structures in more recent years is expected to continue as the market moves forward.

As “the buy-side dominance of dedicated ILS funds and their re/insurance expertise is increasingly opening up opportunities for insurers to offload risks via non-synthetic, less standardized structures to capital markets,” says Munich Re. 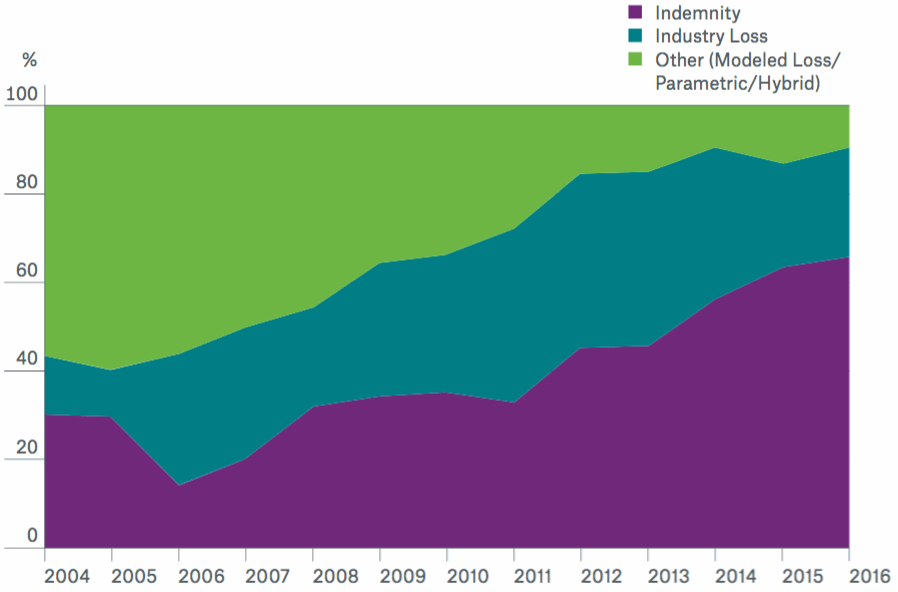 The above chart provided my reinsurer Munich Re shows that over the last ten years or so indemnity protection has increased its share of cat bond and ILS issuance, in most years. That being said, the reinsurance giant feels that other trigger structures, such as parametric and modelled loss, while losing market share, will continue to be an important element to the space going forward.

“The use of such solutions will continue to be driven by the public sector and corporate space, as they allow the transfer of difficult-to-model risks to the capital markets and facilitate rapid post-event liquidity for disaster relief purposes,” says Munich Re.

The expectancy from Munich Re that corporates and public sector entities will continue to utilise parametric triggers and more niche elements of the ILS space, ultimately driving the growth of this part of the industry, is supported by the recently announced goals of both the London Market Group (LMG) and the World Bank.

The LMG has revealed that it hopes to issue a catastrophe bond to provide a more efficient solution for insuring the vulnerable against natural disasters, a transaction that would essentially replace the UK’s foreign aid budget. While the World Bank has launched the world’s first pandemic risk market that will be backed by pandemic cat bonds and reinsurance, it says.

In both instances, and with disaster resilience in general, the use of parametric triggers enables rapid payout post-event, which is seen as vital in improving the ability of vulnerable regions to better respond to natural disasters.

Highlighted by the chart below, Munich Re explains that the average risk period of cat bond issuances has also increased in recent years, which the reinsurer in part attributes to increased sophistication of investors, and a reduced number of opportunistic investors. 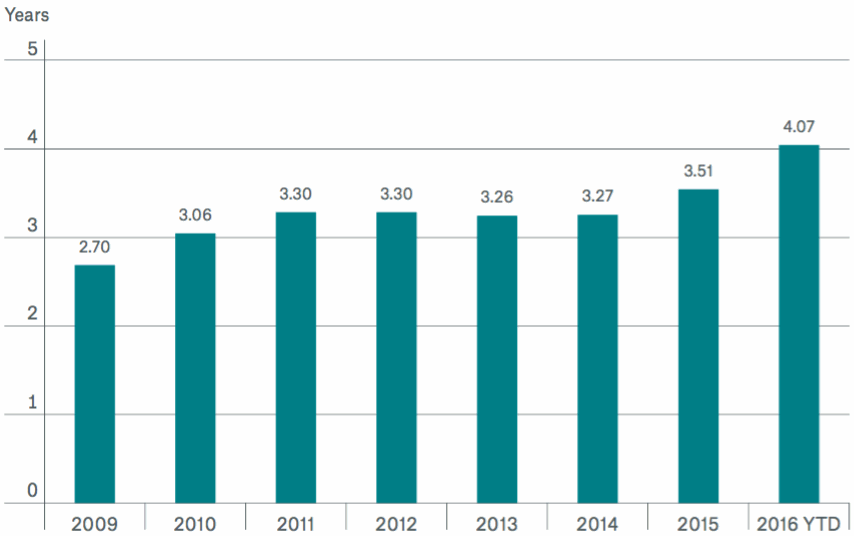 “Provided the low interest rate environment prevails, we expect further capital allocation to dedicated ILS funds, and as a result, a sustained interest for new, diversifying perils and more variety in terms of structural features and durations,” said Munich Re.