Longer-term investors in insurance-linked securities (ILS) and reinsurance linked assets are expected to remain committed to the sector despite the impact of losses over the last two years, with a resumption of ILS market growth anticipated once recent losses have been digested.

Reporting in its latest Reinsurance Market Outlook, Aon highlights the strong growth that was seen in alternative capital through the first nine months of 2018, as the ILS market grew in the wake of the 2017 hurricane events.

The traditional reinsurance market shrank a little over the same period, largely due to rising interest rates and a stronger U.S. dollar, the broker notes. 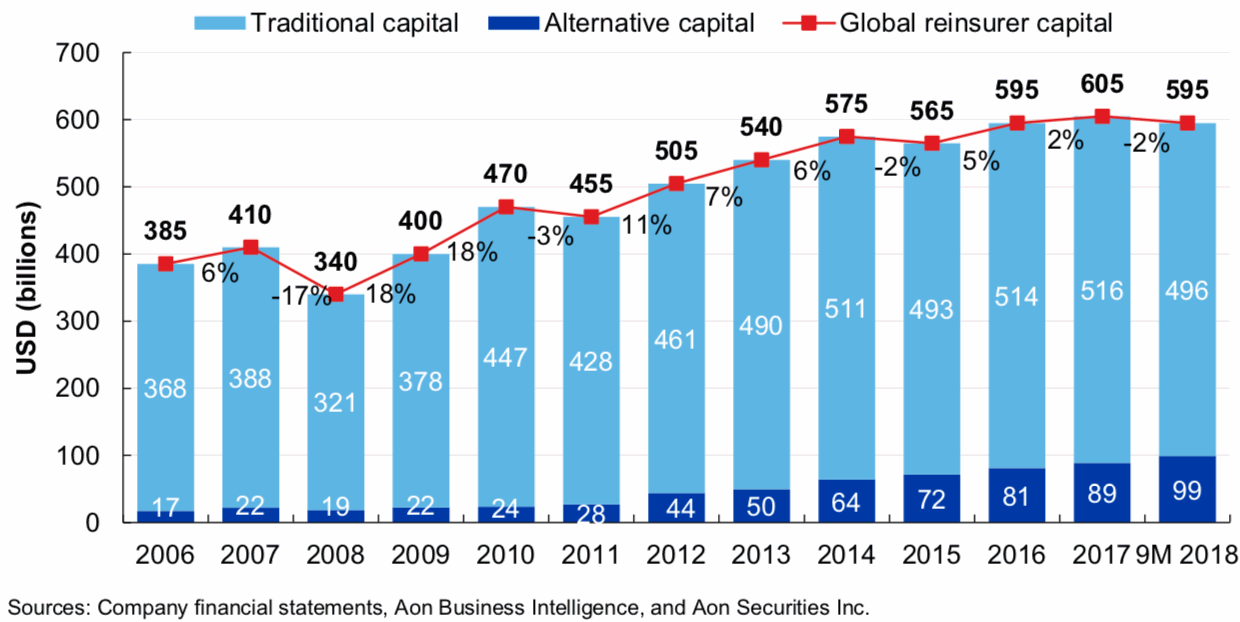 The chart above, taken from Aon’s new report, shows that overall global reinsurance capital shrank by almost 2% over the first nine months of 2018, with traditional capital declining by 4% during the period.

But alternative capital, so ILS fund and investor backed capacity in catastrophe bonds and collateralized reinsurance vehicles, grew strongly by 11% to reach $99 billion at the end of September 2018.

Aon highlights the resilience of the reinsurance market in the face of catastrophe losses, although notes the difficulties faced by some in the ILS world due to the impacts of trapped collateral and in some cases heavy loss experience.

But overall the broker notes that the ample capital available meant that reinsurance continued to be available for buyers at accretive terms, despite the reduction in overall capital in the market.

While ILS capital grew, Aon noted the effect of the losses but does not expect any meaningful shakeout as a result.

“Although this market continues to digest recent loss activity, longer-term investors are expected to remain committed to the segment,” the broker explained.

There were slight increases in reinsurance demand, Aon said, which were influenced by regulatory dynamics, attractive buying conditions and the losses in non-peak territories that seek more robust coverage for these perils.

But even with this increase in demand and shrinking of capacity, Aon says the market remains well-capitalised, with supply of capital outstripping demand.

The losses of the last two years have been more impactful to the ILS market and alternative reinsurance capital providers, Aon says, with investors having experienced lower than anticipated price rises at renewals, loss creep on the 2017 hurricanes and some other events, as well as fresh impacts from more recent catastrophes.

“Significant amounts of collateral have become trapped and the ongoing commitment of newer participants is being tested. This is affecting areas most dependent on this form of capacity, notably the retrocession market,” Aon explains.

As a result, “Headline growth in alternative capital is slowing, as the continuing entry of new funds is being offset by loss development on past events and redemption requests from a relatively small number of investors looking to exit,” the broker continues.

But, positively, Aon says that it expects, “The previous rate of growth to resume once this area of the market has fully digested the losses incurred over the last two years.”

Developments in the ILS market certainly point to a resumption of growth once these losses are dealt with.

There is evidence of investors seeking out more efficient ways to access risk, such as PGGM’s new venture with RenRe Vermeer, while new investors are also coming to market, not least asset management giant PIMCO which set out its stall recently.

Looking ahead to April, Aon expects a similar market dynamic to the one just seen in January, given the composition of business that will be up for renewal.

That suggests rate rises where losses have been at their worst, but that overall the continued weight of capital and appetite of the major traditional reinsurers is likely to moderate rises across the marketplace, as seen in January.

Reinsurance firm Swiss Re continues to expand its parametric risk transfer activities, this time with the launch and backing of...