Generally, insurance-linked investment fund managers have moved up a ranking of alternative asset managers over the last year, as their assets under management increased propelling them upwards. But the potential for ongoing growth is clear, as ILS only makes up 0.6% of the surveyed asset base. 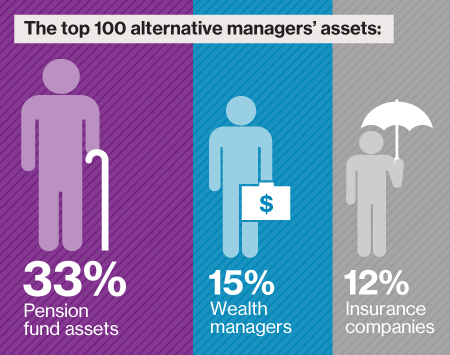 The latest survey on alternative assets from Willis Towers Watson, the Global Alternatives Survey 2017, shows that the largest insurance and reinsurance-linked investment manager Nephila Capital has moved up the rankings, reaching the dizzying heights of number 191 in the list of all alternative asset managers included in the survey.

While that may seem low, Nephila’s $10.2 billion of ILS assets under management is a far cry from the size of the world’s alternative investment managers with the top 100 all having more than $20 billion under management.

Nephila has moved up the rankings though, the 2016 survey showed the ILS fund manager down in 210’th position in the overall list, with its assets listed as just over $9.3 billion at the time.

The survey also lists the pension fund assets of alternative investment managers and here Nephila Capital has risen from 81 in 2016 to now sit at 63, thanks to an increase in the proportion of its ILS assets under management that come from pension funds, $7.4 billion in 2016 and now $9.4 billion in 2017.

The report clearly explains the scale of the alternative investments market and the very small piece that insurance-linked securities (ILS), catastrophe bonds and other reinsurance linked investments play in that marketplace.

ILS and insurance-linked investments account for just 0.6% of the total assets surveyed. Granted, the survey only includes around $39.4 billion of ILS fund manager assets, which is far below the total size of the market (we have over $75 billion listed here). But even then it takes ILS to just 1.2% of the total and it’s likely that the other asset classes covered are also just as under-represented in the survey.

In the 2017 survey 16 insurance-linked investment managers are included, representing the $39.4 billion of ILS assets, with each having a range of ILS strategies from catastrophe bonds through to those much more focused on collateralized reinsurance and private ILS deals.

Credit Suisse Insurance Linked Strategies Ltd. has risen up the rankings as well, from 259 in 2016, to 240 in the 2017 survey and commanding just over $7 billion of ILS assets.

Insurance-linked investment fund managers with less than a billion under management, as recorded by the survey, include new entrant Mt. Logan Re Ltd, AXA Investment Managers, another new entrant in SCOR Investment Partners, Blue Capital Management, Lombard Odier enter the list this year, OFI Global remain and finally Barings enter. Deutsche Bank and Tages are not included this year.

But assets under management aside, with this being a tiny asset class compared to the total alternative investment space and miniscule when compared to all investable assets that an investor such as a pension fund might consider, the survey shows that there is considerable room for ILS to grow and take a larger share of global assets allocated to alternatives.

Willis Towers Watson explains that insurance-linked investments continue to be seen as a great diversifier for an institutional investors’ portfolio, adding that pension funds in particular have increasingly accepted ILS as an investment and helped to propel the growth we’ve seen in recent years.

But still some major institutions are not investing much in ILS, with pension fund investors contributing the majority of the ILS market capital base today. In fact, in Willis Towers Watson’s survey, no sovereign wealth funds, endowments, foundations, wealth managers or fund of funds allocated to the ILS fund managers tracked and no insurers either (although that’s less surprising).

But the fact that ILS assets represent less than 1% of the total asset base surveyed, while offering perhaps the most diversifying features of any asset class included, shows that the education about insurance and reinsurance as an investable asset class still falls short and needs to continue if the sector is to attract a greater proportion of global assets.

In total, the WTW report shows that global alternative assets under management hit $6.5 trillion for this years survey, while the top 100 asset managers featured command $4 trillion of that (up 10% year-on-year).

This is a huge figure and pension fund assets, the largest allocators to the ILS sector, have been driving that impressive growth for the top 100 alternative asset managers with now $1.6 trillion of pension assets allocated to the top 100 managers tracked in the survey report.

As pension funds typically take some of the longest durations to make allocation decisions to new asset classes, this adoption and increasing allocation to alternatives as a whole bodes well for ILS.

Similarly, there is an increasing appetite among other types of allocators to find new alternatives, which also bodes well for the ILS sector and could help to drive future growth.

“Although the alternative asset manager universe continues to be dominated by pension fund assets, as solutions have continued to evolve that are better aligned to investor needs and incorporate lower cost structures, we have seen growing interest from other investor groups such as insurers looking to lock-in alpha opportunities presented by continued volatility,” commented Luba Nikulina, global head of manager research at Willis Towers Watson.

Given how small ILS is in the grand scheme of alternative investments, but the generally very positive views of the ILS asset class from large pension funds that are seasoned allocators, it is to be expected that growth will continue and in years to come we could see ILS becoming a larger proportion of surveys such as this.