The insurance-linked securities (ILS) fund market recorded an average return of 0.35% in October 2017, according to the Eurekahedge ILS Advisers Index, however the difference in performance was stark as the California wildfires drove 10 ILS funds fell to a negative month. 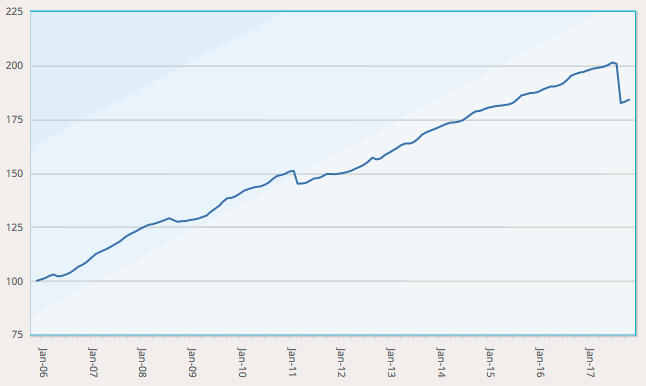 The ILS funds that suffered in October were largely those that allocate capital to private ILS and collateralized reinsurance, given the exposure to the California wildfires is much greater in the reinsurance market, rather than catastrophe bonds.

After September saw the ILS fund market experience its largest ever losses, averaging a -9.04% return for the month, the bounce back to positive territory for the month of October is positive, as it demonstrates the resilience of the ILS product. It also demonstrates well the diversity within ILS fund strategies, such that the average return can still be positive even while 10 strategies suffered a loss for the month.

Stefan Kräuchi of ILS Advisers notes that the California wildfires are estimated to have caused an industry loss of anywhere between $10 billion and $15 billion, a bill that could also be on the rise due to more recent wildfire outbreaks, as we discussed here yesterday.

The 0.35% positive return recorded by the ILS Advisers Index for October 2017 is below the historical average, which is 0.53%, and it takes the 2017 performance to the end of October to -7.01%, which is the lowest in the 12 years of ILS fund market performance that the Index tracks.

ILS funds will be hoping for a more positive end to the year, with a chance that some reserved assets may get released towards the end of the year as loss estimates have fallen for some of the hurricane impacts.

24 of the 34 funds represented in the ILS Advisers Index recorded a positive return in October, but 10 fell to a loss for the month.

Kräuchi explained how ILS fund performance differed in October, saying, “Among the 10 negative funds, 8 have allocation to private ILS contracts. The difference between the best and the worst performing fund was 5.45 percentage point. The way different funds approach of loss reserves explains part of the still quite wide performance differences especially between private ILS funds.”

Those funds that invest in private ILS and collateralized reinsurance contracts continued to underperform, reflecting the impacts of the California wildfires.

He continued to explain the effects of the California wildfires on ILS funds in October, saying, “It exerted very different effects on private contracts and cat bonds, due to the fact that few cat bonds cover wildfires while private ILS have substantial exposure to the peril. This slowed down the recovery process of some private ILS funds.”

There are some catastrophe bonds which have exposure to these wildfires and as Artemis revealed yesterday the Caelus Re V 2017-1 Class D notes are one additional cat bond that is set to face a loss from the California fire events.

2017 has seen an aggregation of major losses like no other years in the ILS fund market’s history and as such the ramifications of these losses could linger.

Kräuchi explained, “Hurricanes Harvey, Irma and Maria, together with two Mexico earthquakes and the record breaking California wildfires in October, could make 2017 one of the most expensive years in decades. With the rapid development of ILS in recent years, the asset class is about to absorb a very meaningful portion of the losses. It’s also worth noting that the claim settlement process post events especially for the two hurricanes Harvey and Maria, could extend for months to years. Thus it will take more time for the final actual impact of the events to be fully reflected in the NAV of ILS funds.”

Due to the time it can take to assess, finalise and settle losses, Kräuchi warned that, “The final actual losses for some ILS managers could be significantly different from their loss reserves today.”

For the month of October the catastrophe bond market recouped quite a lot of its mark-to-market losses, with pure cat bonds funds tracked by the Index rising by 0.78%. The subgroup of funds that invest in private ILS and collateralized reinsurance increased by just 0.05% for the month, reflecting the California wildfire impacts.

However, over the course of the year to date, the private ILS funds trail pure cat bond fund performance by a huge -10.67%, a massive margin reflecting the severity of the losses suffered in 2017.

October was always going to be another tough month for the ILS fund market, as we explained earlier this week, due to the impact of the wildfires which struck on the heels of the sector dealing with its hurricane losses.

Looking ahead, the coming months will see ILS funds focused on dealing with claims, reserving and releasing assets, while also raising capital and preparing for the 2018 reinsurance renewals to ensure they can offer continuity to their ceding clients and investors.