Of the ILS and collateralized markets, it was global tech development focused investment giant the D.E. Shaw Group that took the largest slice of the reinsurance renewal for Florida Citizens.

D.E. Shaw, of course, used to be a prolific underwriter of catastrophe reinsurance and retrocession risks on a collateralised basis a few years ago, but in recent years had pulled back from the market as it struggled to find opportunities that were deemed attractive.

However, it had not gone away and was still underwriting some slices of specific reinsurance programs, where they met its risk and reward requirements. Hence this is not a return to the market, rather an upsizing of appetite for D.E. Shaw.

In 2019, with rates on the rise it seems D.E. Shaw has found Florida property catastrophe reinsurance a much more attractive opportunity, underwriting a $121.35 million slice of the almost $570 million of the program that was placed at June 1st.

The placement took Citizens traditional reinsurance to almost $900 million, which added to its catastrophe bond covers that provide $550 million of protection, give the insurer a $1.45 billion reinsurance program for the 2019 wind season.

Interestingly D.E. Shaw was selective in where it participated in Citizens renewal, electing to write $100 million of the Personal Lines Account which was 50% of that tower. In addition the investor also added a $21.35 million slice of the sliver reinsurance placement that sits next to Florida Citizens coverage from the Florida Hurricane Catastrophe Fund (FHCF) for its coastal account. 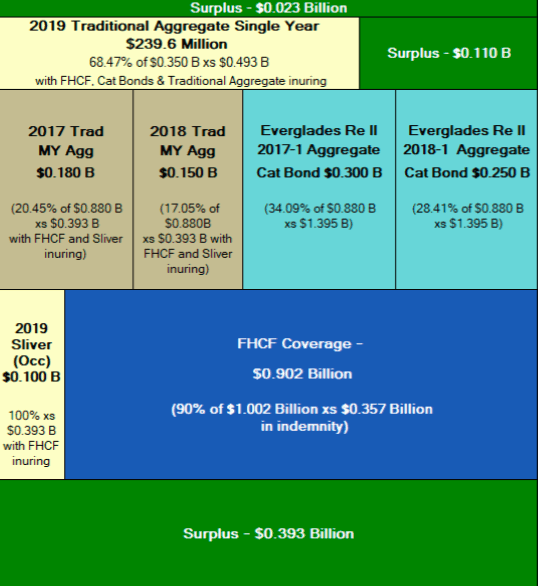 D.E. Shaw was the largest participant in Florida Citizens renewal placement in 2019, and the second largest in the program overall only falling behind Validus which has nearly 19% of the program with an almost $170 million share if you include the multi-year placements from 2017 and 2018.

Of the 2019 reinsurance placement at June 1st, other major participants on the traditional side were Everest Re with almost $45 million, Munich Re with almost $65 million, Swiss Re with $27 million, Hannover Re with $20 million, RenaissanceRe with $27.8 million, Validus with $63.5 million, while a range of Lloyd’s syndicates and other reinsurers also took shares.

As well as D.E. Shaw, other collateralized reinsurance and ILS fund markets took significant slices of the Citizens renewal this year.

Of these, Nephila Capital underwriting through its Lloyd’s syndicate 2357 was next biggest with $33.4 million.

Credit Suisse Insurance-Linked Strategies took $20 million, with $10 million each underwritten by its rated Guernsey reinsurers Humboldt Re and Kelvin Re.

LGT ILS Partners underwrote almost $9.5 million of the placement taking its share of the overall program to nearly $45 million, all of which was written via its Lumen Re Ltd. rated Bermuda reinsurance platform.

But D.E. Shaw’s participation in 2019 is the story of the placement, as the investor clearly found the terms to be attractive enough to make a big bet on the Florida Citizens personal lines account for the wind season ahead.

Other companies participated in the placement that will likely share some of the risk with third-party capital investors through their sidecars and quota shares as well, such as Fidelis, Argo, and others.

Register now to attend our next ILS conference in Singapore, ILS Asia 2019.

We’re returning to Singapore for our fourth annual ILS market conference for the Asia region on July 11th 2019.
Please register today to secure your place at the conference. Tickets are almost sold out.