Alternative reinsurance capital levels, largely in insurance-linked securities (ILS) formats, declined very slightly in the second-half of 2021, with broking giant Aon estimating it fell to $96 billion by the end of the year.

This decline occurred after alternative reinsurance or ILS capital had rebounded to equal its previous high of $97 billion at the mid-point of last year.

But overall, the global reinsurance market grew strongly as traditional company capital levels increased by 4.1% in 2021 to reach a new all-time high, according to the latest report from Aon’s Reinsurance Solutions.

The broker now counts total global reinsurance capital as having reached a new high of $675 billion at the end of last year, up from $660 billion at the mid-point and up $25 billion, or 3.8% over the course of the last calendar year. 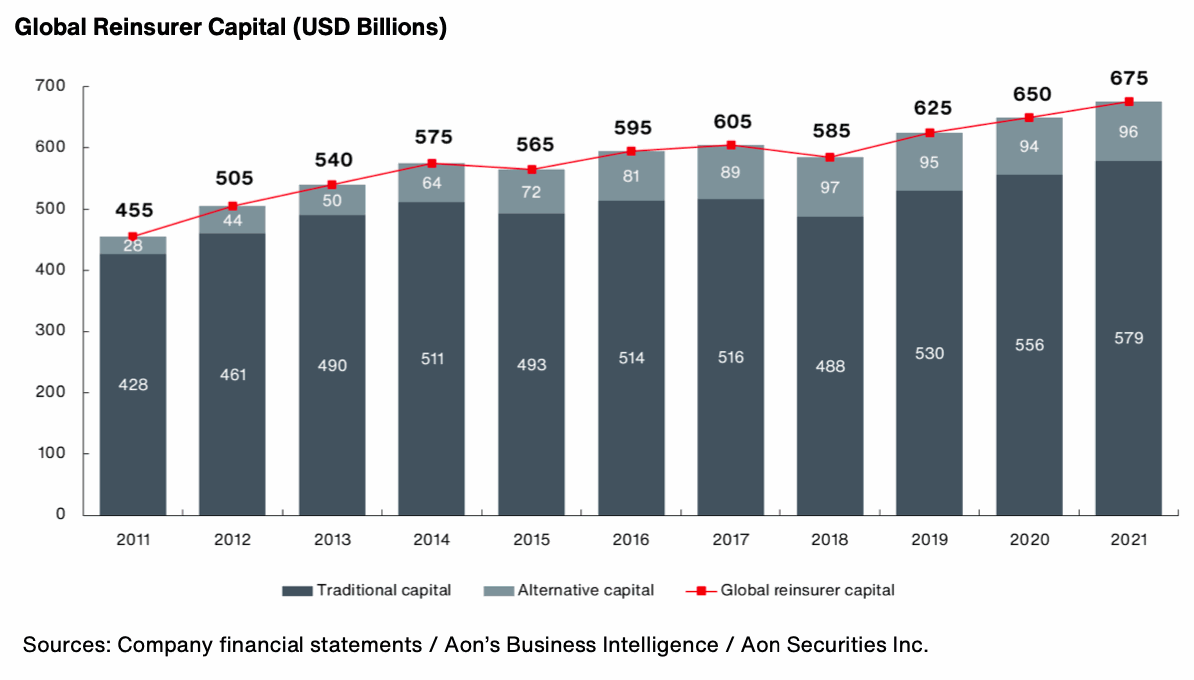 Retained earnings was the main driver of traditional reinsurance capital growth, the broker explained, this despite the fact few start-ups or equity raises were seen.

Aon also notes that alternative capital is now just slightly shy of its peak, which the broker puts as $97 billion in 2018.

But as we reported, using Aon data, that figure was also reached at the middle of 2021, so ILS capital has declined slightly through the second-half.

What drove the decline? Likely loss events including hurricane Ida from the second-half of 2021, as well perhaps as the continued unwinding of trapped capital positions and the payment of losses.

As a result, the shrinkage likely came from the collateralized reinsurance side of the market, rather than cat bonds which clearly had a growth year in 2021.

Aon expects the ILS market will recover and return to growth, with volatility from non-loss sources now affecting the sector but in a manner that is expected to be relatively short lived.

In fact, Aon is forecasting that new entrants and fresh capital will continued to return to the insurance-linked securities (ILS) market, which bodes well for future growth and perhaps reaching the all-important $100 billion mark, by the brokers measure.

The important thing to takeaway is the growth in ILS capital seen through 2021.

Combined with the currently very busy catastrophe bond pipeline, we suspect further growth may be reported at the mid-point of 2022, with the cat bond market driving most of that.