ILS allocations to rise in 2018, with ominous implications for reinsurers: JLT Re

Investor allocations to insurance-linked securities (ILS) could increase further through 2018, as most of the claims from hurricanes and other loss events have fallen within risk tolerance ranges. But as ILS capacity persists and grows, the implications for traditional reinsurers are ominous, according to JLT Re.

In its latest reinsurance market report, broker JLT Re looks at the influential role of ILS capital at the January renewals and notes a few continuing trends which have potentially ominous implications for the traditional reinsurance market.

JLT Re says that while the reinsurance market will remember 2017 for the hurricanes, wildfires and other major catastrophe loss events, equally as important to both buyers and sellers of protection has been the performance of the ILS market.

The response of ILS and alternative capital investors after major losses had been a source of speculation for some years and 2017 gave the sector the chance to prove itself and its business model.

After the major hurricanes, Harvey, Irma and Maria, numerous voices warned of trapped collateral and ILS capacity lock-up, saying this would see the alternative market hampered at the key 1/1 renewal season.

Additionally similar voices were calling for large rate increases, saying that the trapping of collateralized capacity would be a major factor in the market’s fortunes at January 1st 2018.

But, the concerns have now been put to rest, JLT Re explains, saying that, “A significant chunk of lost capital in the alternative market was replenished in time for the renewal, with substantial capital raising taking place for sidecar vehicles, in addition to significant new (i.e. not renewal) catastrophe bonds issuance.”

The majority of capital raises have been document by Artemis in our catastrophe bond Deal Directory, collateralized reinsurance sidecar directory and insurance-linked securities managers directory. 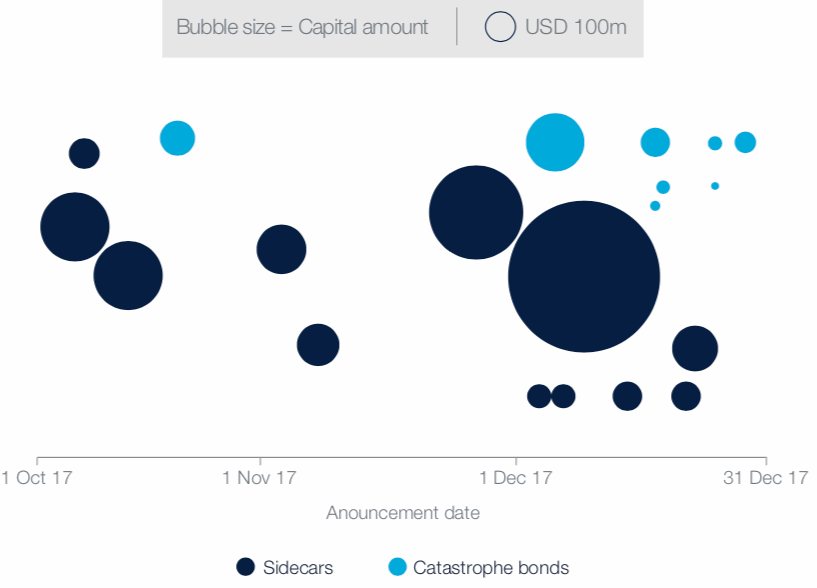 As well as the raising of fresh capital, which JLT Re documents some of in the graphic above, the broker notes that, “claims for the most part have been paid speedily and efficiently,” which is an important piece of the ILS market’s job.

Of course the major ILS fund managers have been paying claims every year without fail, as their expansion into reinsurance grew. But 2017 has seen them pay the largest volume of claims in their history’s, providing a valuable test of the mechanisms and structures that ILS markets have in place.

Much of this capacity was deployed at “a lower rate of return than many predicted” according to JLT Re, which the broker says, “played a crucial role in capping rate increases seen at 1 January 2018.”

As we’ve explained before though, traditional reinsurance capacity played an equally important role in dampening rate increases at 1/1, especially late in the day as a number of major players sought to fill their books and dropped pricing to achieve that.

JLT Re said that the raising and deploying of fresh capital so soon after the largest losses the ILS sector has faced, “also reflects investors’ growing confidence in the reinsurance asset class.”

“Investors undertook extensive due diligence before committing funds to the sector and were well prepared for these losses,” the broker explained.

As the catastrophe losses mostly fell within risk tolerance ranges, JLT Re believes that “allocations could increase further through 2018.”

We’re already hearing of a number of relatively new investors to the ILS space that allocated capital after the hurricanes and are now already working with ILS fund managers on ways to increase their allocations at the mid-year renewals.

Additionally, some larger investors that are well-established in ILS are also considering allocation uplifts, if the right opportunities to deploy the capital can be secured.

As ever, the ILS fund management teams are tying to carefully match their inflows and capital raising with opportunities to deploy capacity, which is key to the health of the market and their ability to maintain returns at target levels.

As a result of the expectation that allocations to ILS from investors will continue to rise through 2018 and that the ILS market has come out the other side of its largest series of losses in good shape, JLT Re warns of what this means for the reinsurance market as a whole.

Commenting on reinsurance buyers, JLT Re said, “Cedents can therefore reasonably expect this source of reinsurance capacity to persist for the long-term.”

However, for those seeking to compete with ILS, the broker said, “The implications for traditional reinsurers are more ominous, however, as it seems they can no longer rely on post-event price hikes to boost profitability, regardless of the magnitude of the loss.”

The reinsurance market cycle continues to evolve, with the influence of the capital market and excess traditional capacity the two major factors that have been changing the way pricing responds post-loss event.

While the growth of ILS can be ominous for reinsurers, it can also be positive for those that learn to harness capital efficiency within their business, and leverage ILS investor appetite to augment their own capacity to underwrite.

As technology advancements creep further into the underwriting process we can expect the pricing peaks and troughs to become even flatter going forwards, as the market learns how to deploy the most efficient capital in the most efficient manner possible, while reducing its own cost-of-capital.

That won’t just be ominous for traditional reinsurers, it will be ominous for any company that doesn’t see this inevitable future coming and fails to keep up.