Insurance Australia Group (IAG) said that it experienced “modest upwards pressure on like-for-like reinsurance rates” as the firm renewed its $8 billion catastrophe reinsurance program, confirming that the slight hardening of the market reaches to regions unaffected by recent major events.

IAG’s experience at renewal confirms that rates have been on the rise in the wake of 2017 catastrophe events, even in regions which were far from the impacts of hurricanes Harvey, Irma and Maria, or the California wildfires.

However, modest upward pressure on rates likely only translates into low single digit increases, which would be aligned with the experience of reinsurance broker Willis Re, which only noted rates as flat to up 2.5% at best in Australia.

IAG’s large catastrophe reinsurance program is actually smaller than last year, as the firm now only needed its program to be placed to 67.5%, down from 80% in 2017, thanks to the recently added five-year quota-share reinsurance arrangement with reinsurance giants Munich Re, Swiss Re and Hannover Re which came into force on January 1st.

For 2018, IAG has two main components to its catastrophe reinsurance cover, its main per-occurrence cover running up to $8 billion, and an aggregate sideways cover providing $475 million excess of $325 million of protection that helps it to manage those smaller, frequency type catastrophe and severe weather loss events.

IAG has one prepaid reinstatement for the main catastrophe cover and three reinstatements prepaid for the lower layers of that section of the program.

IAG said that its underlying aggregate exposure has increased slightly, although a little offset by a shift in portfolio mix towards short tail personal lines, over commercial.

The reinsurance program covers IAG against losses in all the regions it operates, aside from India where a joint-venture takes care of its own reinsurance arrangements.

The insurer said that the renewals did come in slightly more expensive, although within budget guidance, as the company experienced, “modest upwards pressure on like-for-like reinsurance rates during the renewal process.”

The program has been placed largely with highly rated reinsurance firms, more than 92% being A+ rated or better. But we are told that there is some ILS capacity backing some of the rated coverage and there could be collateralized reinsurance within the segment that is not as highly rated (or unrated) as well.

The overall construction of the reinsurance program for 2018 is very similar to previous years, with the main differences being the result of having more quota share reinsurance protection in place this year.

Full details of IAG’s 2018 catastrophe reinsurance program (gross) can be seen below. 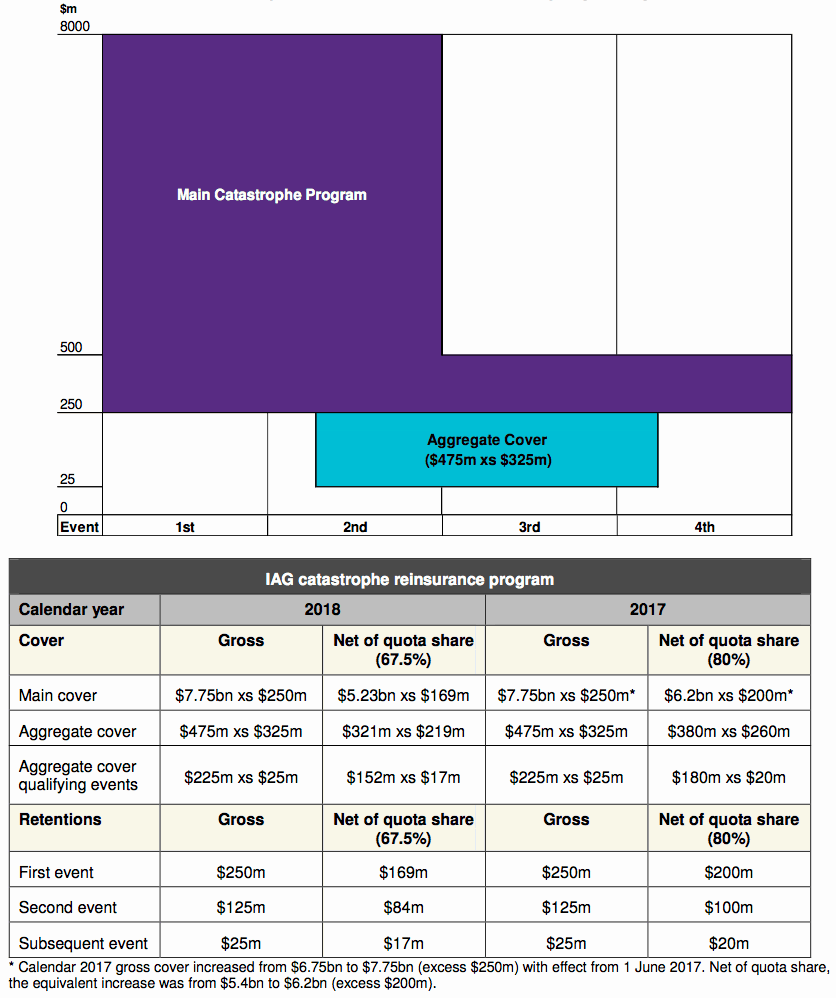