Australian primary insurance giant IAG has renewed its catastrophe reinsurance arrangements for 2020, adding 10% to take the size of the program coverage to $10 billion, but has also reported that the ongoing bushfires in Australia have triggered its aggregate reinsurance protection.

IAG is a heavy user of catastrophe reinsurance protection from both traditional and capital markets, as a capital source to better manage its underwriting appetite, exposures and losses.

For the the 2020 calendar year, IAG has lifted its gross reinsurance protection by 10% to $10 billion, up from 2019’s $9 billion, in a program that has been placed to 67.5%, reflecting IAG’s whole account quota share arrangements with major global reinsurers.

IAG’s Chief Financial Officer, Mr Nick Hawkins commented on the successful reinsurance renewal, “Our reinsurance program is an integral part of our capital platform. While the structure of the 2020 program is similar to prior years, we continue to expand our catastrophe reinsurance cover in a cost-effective manner, while providing additional protection above our modelled exposure.

“We have also increased the multi-year arrangements we have with some of our largest reinsurance counterparties. Combined with our existing quota share arrangements, this means around 70% of our gross main catastrophe program for calendar 2020 is protected by multi-year coverage, providing greater certainty of future reinsurance cover.”

The insurer said that reinsurance rates remained “relatively stable” for its renewal, leading to a cost that was aligned with its budget and margin guidance.

More than 92% of the $10 billion catastrophe reinsurance program renewal has been placed with A+ or higher rated entities, IAG said.

IAG does leverage capacity from insurance-linked securities (ILS) players within its program and also tapped the capital markets through its first catastrophe bond last year.

The 2020 reinsurance program renewal features a main per-occurrence catastrophe cover for losses up to $10 billion, which includes one prepaid reinstatement and for which IAG will retain the first $250 million of each loss, the same retention as in 2019.

The lower layer of the main program, at $250 million excess of $250 million, features three prepaid reinstatements, also the same as in 2019.

The insurer also has an aggregate sideways reinsurance cover, providing $425 million of coverage excess of $450 million, with qualifying events capped at a maximum contribution of $225 million excess of $25 million per event. 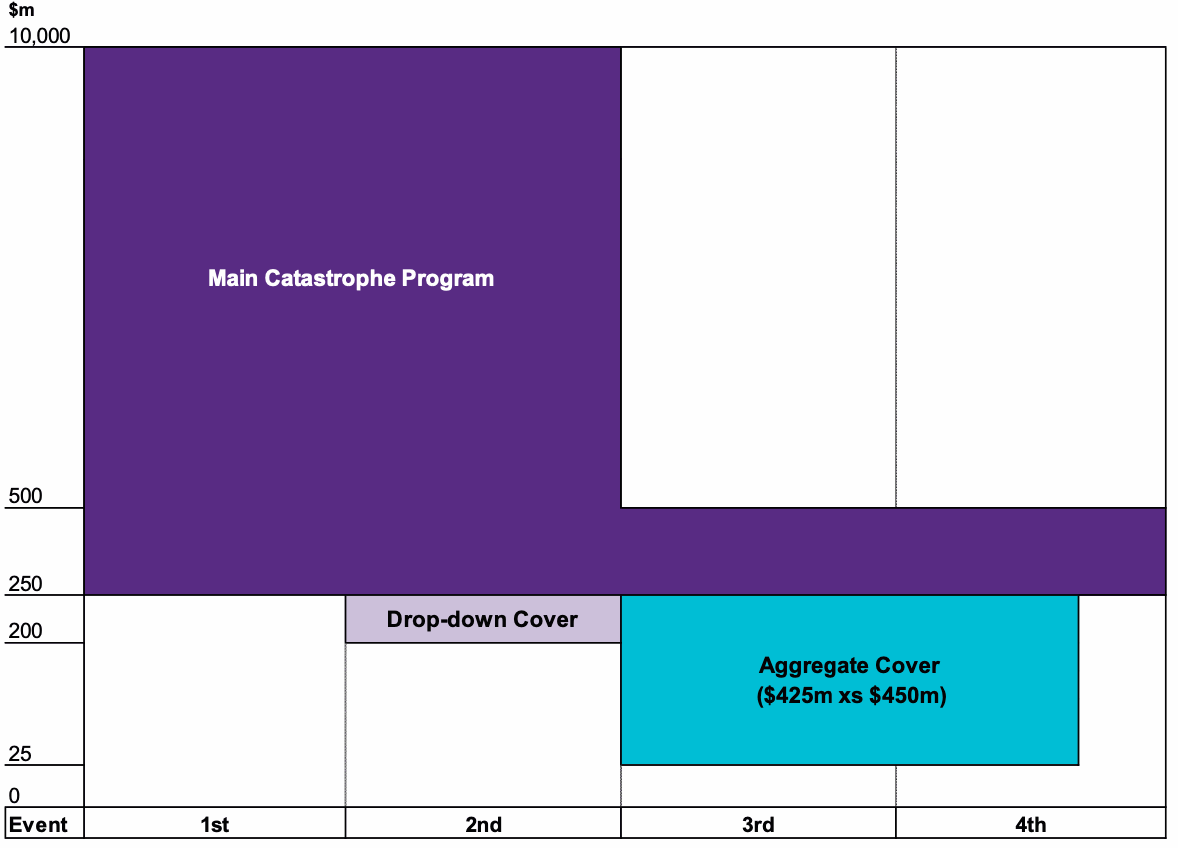 IAG still has its 10-year 20% quota share arrangement with reinsurance giant Berkshire Hathaway in place that runs to 2025, and 12.5% quota share agreements with Munich Re, Swiss Re and Hannover Re which were entered into at 1st January 2018 renewals and have an average duration of around five years.

The new reinsurance arrangements mean that IAG’s first event retention is down to $169 million, second event $135 million and third-event $17 million.

IAG also has a stop loss reinsurance tower for retained natural perils that runs through its financial year, offering the insurer after-quota share protection of $101 million in excess of $675 million for the 12 months to 30th June 2020. This program attaches approximately $34 million above IAG’s FY20 natural perils allowance of $641 million.

Speaking of natural perils allowance, IAG has reported that the ongoing bushfire disaster in Australia has caused it to claim on its reinsurance arrangements, under its aggregate tower.

The Australian bushfires continue to burn at a devastating rate in many states, with overall insured losses cited as A$297 million by the Insurance Council yesterday.

IAG’s disclosure today shows that this figure will rise, potentially significantly, as the insurer had received 2,800 claims as of January 2nd, with more than 1,500 of these filed since the beginning of December and most relating to residential properties.

IAG Australia Division CEO Mark Milliner commented, “Our priority is to help customers affected by these terrible events as soon as possible, while minimising the personal risk to those facing these ongoing catastrophes.

“Our assessors and claims teams are on standby to support customers when it is safe to enter impacted areas, and our partner builders have the capacity to enter those regions when practicable.

“We encourage our customers to make contact at the earliest opportunity if they need to lodge a claim, access emergency accommodation or request other assistance.”

IAG said it’s still too early to give an accurate picture for how the ongoing bushfires will impact it, but it anticipates that net natural peril claim costs for the six months ending 31st December 2019 will near $400 million after its quota shares, which is above the natural peril allowance of $320 million for the half-year period.

This estimate includes three ongoing bushfire events, losses from which IAG says have been capped by reinsurance recoveries under its aggregate cover after the full erosion of associated deductibles.

Overall, bushfire claims in the six months to December 31st 2019 are expected to contribute more than $160 million of net claim costs, after taking the quota shares into account, IAG said.

Given the definition of the bushfires, despite them occurring in December and burning through year-end, which goes into the second-half for IAG, the claims from them will be covered by IAG’s calendar 2019 aggregate reinsurance protection, with the duration of that protection dependent on the individual event inception dates and weather patterns that follow, the company said.

IAG’s experience shows that the reinsurance market should likely expect claims from other major Australian players, as the bushfires continue to burn out of control.

The major Australian insurers are all well-covered by reinsurance and leverage aggregate coverage, which is where losses are most likely to fall.

The quota share partners will also be taking their share of the bushfire claims, through the capital support those large whole account covers provide to IAG.

Given some of these losses fall to the quota share arrangements of major global reinsurers, there is a chance that some of those claims could leak into the sidecar vehicles they operate as well, so potentially having minor impacts to third-party capital backed positions.

There is also a chance that some third-party capital players, likely ILS funds, may participate in IAG’s aggregate reinsurance arrangements and experience some of the bushfire claims through that tower.

However, any claims leakage to third-party capital or ILS funds is likely to be minimal at this stage.