The 2020 Atlantic tropical storm and hurricane season is forecast to have a 60% chance of “above-normal” levels of activity by NOAA, with the agency calling for between 6 and 10 hurricanes to form over the coming months.

The forecast from NOAA joins almost every other in calling for a season of above average levels of storm formation and hurricane activity.

NOAA predicts a “busy” 2020 Atlantic hurricane season, saying that multiple climate related factors point to an above average season ahead.

The forecast calls for 13 to 19 named storms to form during the 2020 Atlantic storm season, with 6 to 10 becoming hurricanes and 3 to 6 major hurricanes. 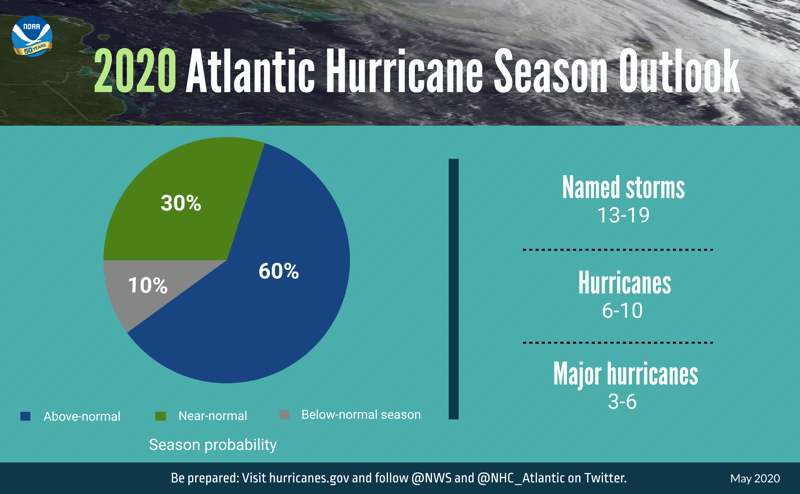 NOAA says these ranges are provided with a 70% confidence.

A combination of climate factors are driving the above average forecast, with El Nino (ENSO) conditions expected to either remain neutral or to trend toward La Nina, meaning no El Nino will be present to suppress hurricane activity.

Similar conditions to these have produced more active seasons in the past, NOAA says, since the current high-activity era began in 1995.

“NOAA’s analysis of current and seasonal atmospheric conditions reveals a recipe for an active Atlantic hurricane season this year,” explained Neil Jacobs, Ph.D., acting NOAA administrator. “Our skilled forecasters, coupled with upgrades to our computer models and observing technologies, will provide accurate and timely forecasts to protect life and property.”

As a result, the 2020 Atlantic tropical storm and hurricane season remains one to watch closely for the insurance, reinsurance and ILS community, as now all of the forecasters we track have called for activity levels to be above average and the majority are calling for well-above average levels of storm activity through the months ahead.

Adding NOAA’s 2020 Atlantic tropical storm forecast to those we track keeps our Artemis average of 17 named storms, 8 hurricanes and 4 major hurricanes, which is still well-above the averages.

Of course, number of storms alone is not an indicator of a threat to the reinsurance, catastrophe bond and insurance-linked securities (ILS) markets,. It only takes one storm to cause significant damage and even a weaker storm can cause deadly impacts to lives and livelihoods.

Equally, we could have the most active season on record, but if no storms make landfall in populated and built up areas then insured losses for the industry would be low.

As ever, uncertainty remains, but with forecasts suggesting activity could be particularly high this year, reinsurance and ILS interests will be firmly on-watch for the coming months.