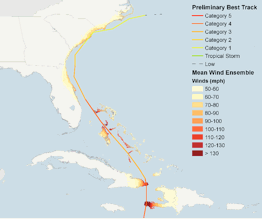 RMS is the latest to provide an official estimate of insured losses due to recent hurricane Matthew and the figures are roughly in-line with the consensus, although U.S. figures are towards the lower end of estimates which will be encouraging for the re/insurance industry.

RMS told clients yesterday and reported today that the firm estimates that U.S. insurance losses from Hurricane Matthew will be in a range from $1.5 to $5 billion, while insured losses in the Caribbean will be between $1 and $3 billion, with the majority coming from The Bahamas.

The company expects that around 70% of the estimated U.S. loss is to residential insurance lines, while coastal flooding due to storm surge is likely to contribute around 30% of the all-lines loss. This includes an expectation of coverage leakage and an escalation in claims severity for wind-only policies in situations where RMS says wind and water hazards both feature in residential lines of business.

Interestingly, RMS said that just one of the ten event reconstructions the firm modelled resulted in a U.S. insured loss of over $4 billion, perhaps suggesting that the insurance and reinsurance industry faces a slightly lower bill than had been anticipated.

But RMS warns that there is still a small possibility that U.S. losses from hurricane Matthew affecting the insurance and reinsurance industry could reach as high as $5 billion.

Both of the insured loss estimates, for the U.S. and Caribbean, include property damage and business interruption, caused by wind and coastal flooding upon residential, commercial, and industrial lines of business. For the U.S, auto lines of business are also included. The firms estimate does not include losses to the National Flood Insurance Program (NFIP) or to public buildings and infrastructure.

RMS’ loss estimate involved a reconstruction of Hurricane Matthew’s hazard, calibrated with insights gained from both remote and on-the-ground surveys of the damage by the firms reconnaissance teams.

RMS’ on the ground teams note potential non-modelled loss, including frequent instances of beach erosion in the southeast U.S. caused by both wind and storm surge, and also mold growth following the flooding that the firm warned could escalate the vulnerability of exposures.

Tom Sabbatelli, product manager in the RMS hurricane modeling team, commented; “In the immediate aftermath of a hurricane, there can exist a degree of uncertainty around loss estimates. Matthew’s track parallel to the southeast U.S. coast put significant amounts of exposure at risk from damaging winds and surge, which exacerbates this uncertainty. Even small variations in our ten wind and storm surge reconstructions over the wide swaths of exposure can have a significant impact on the estimated loss.”

RMS breaks down its estimate of losses that will fall to insurance and reinsurance markets by state or region:

The above table provides the RMS best industry loss estimate by country and U.S. state, including approximate contributions from storm surge damage and are based on the range of losses from the RMS ensemble footprints in version 16.0 of its North Atlantic Hurricane Models.

RMS said that its surveys showed the extent of inland floodings contribution to the loss, which it says will be significant. “Severe flooding, driven by storm surge and the record rainfalls will prove to be the largest driver of economic losses in the southeast U.S.”

However, so far RMS’ loss estimate excludes damage associated with inland flooding, as the firm explains that a post-event estimation of the impact of inland flooding can only be completed once flood levels have receded and rivers are no longer at flood stage.

But with the National Flood Insurance Program (NFIP) taking the bulk of residential flood claims or private policies excluding them, RMS does not expect the private insurance industry to receive a high number of flood claims.

But the firm does expect the insurance industry to cover commercial and industrial inland flood losses, which it says tend to be covered as part of multi-peril or all risks policies.

RMS’ estimate does compare well with the range of early insurance and reinsurance loss estimates, which continue to suggest a cost to the industry from hurricane Matthew somewhere north of $4 billion across the U.S. and Caribbean.

CoreLogic had been the first to put out an estimate at $4 billion to $6 billion. Then AIR Worldwide, noted a loss of up to $8.8 billion for U.S. and Caribbean losses from the event, while Karen Clark & Company (KCC) estimated a loss of around $7 billion for the U.S., and so estimates seem still to be converging on the $4 billion to $6 billion range, perhaps a bit more.

Meanwhile the expectation remains that reinsurance capital will deal with a significant proportion of the losses from hurricane Matthew and that ILS funds and collateralised vehicles will take a share.

– 50% of mid-estimate $5bn Matthew loss to fall to reinsurance: JPM.