Hurricane Joaquin became a Category 4 storm late yesterday and continues to batter the Bahamas with sustained winds of up to 130mph, a storm surge and extreme rainfall. The forecast track has continued to shift further east, but the threat of a major rainfall and flooding event in U.S. eastern states remains.

Hurricane Joaquin is now located over the central Bahamas, with sustained winds of 130mph and gusts of up to 160mph. The Bahamas islands are taking the brunt of this storm, damage reports have yet to come out, but there are reports that a storm surge of as much as 6 to 12 feet has inundated some islands.

Rainfall totals for the Bahamas are thought to be extreme, with 12 to 18 inch accumulations and as much as 25 inches in some areas. The fact Hurricane Joaquin has been hitting the Bahamas for 24 hours or more now suggests that even these well-prepared islands will be hard hit by this storm.

The brighter news regarding Joaquin is that the NHC forecast track has shifted east again, taking it away from the U.S. coast completely, reducing any threat to the insurance, reinsurance, insurance-linked securities (ILS) and catastrophe bond markets.

There remains some uncertainty which is reflected in the wide cone of probability in the NHC official map below, however the forecast models predominantly now point towards hurricane Joaquin traveling north and not coming ashore in the U.S.

There are some model runs which now take Joaquin close to Bermuda, as the track shifts that far east in some simulations. However at the moment this seems like an outlier and it seems more probable that Joaquin will travel north between the U.S. and Bermuda.

So the immediate threat from Joaquin is for the Bahamas, which will experience hurricane conditions through much of today, Friday. For the insurance, reinsurance, insurance-linked securities (ILS) and catastrophe bond market, as long as the track stays away from the U.S., the threat has diminished.

Aside from the Bahamas threat, the major rainfall event for U.S. eastern regions from the Carolina’s north remains and there is currently an expectation of extreme levels of rainfall for some areas of South and North Carolina, with some forecasts expecting totals of 15 inches or higher over the next few days.

Joaquin and a Gulf low have pushed an enormous plume of moisture up the U.S. east coast. Rainfall has been heavy for more than a day, with some areas already reporting monthly totals just from yesterday. As this continues, along with an expectation of some coastal flood threat due to Joaquin and high tides, there is a possibility of a severe flood event in areas which get the highest rainfall totals. 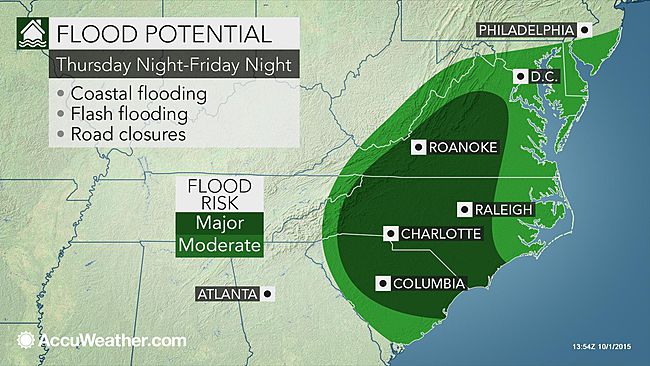 This flood threat can’t be understated, meteorologists are talking about historic levels of rainfall being possible.

Jeff Waters of risk modelling firm RMS commented; “While we watch and wait for Joaquin to finalize its track over the next few days, other parts of the eastern U.S. are experiencing heavy rains and strong winds associated with a frontal system positioned along the eastern seaboard. Rainfall is expected to continue for the next 2-3 days, bringing significant precipitation totals and likely inland flooding to parts of the Mid-Atlantic and Northeast, even if Joaquin remains offshore.”

So hurricane Joaquin’s threat to the U.S. from a left-hook landfall has diminished. It hasn’t gone away entirely, looking at how the forecast models have adjusted east in the last few days shows just how much uncertainty a forecast can hold, but with consensus pointing Joaquin offshore the picture looks much brighter.

We will, of course, update you should the outlook for the U.S. coastline worsen in the coming days, or should Bermuda really come into the frame, as Joaquin makes the turn and heads north.

An update from AIR Worldwide (published at 16:30 EDT yesterday) on hurricane Joaquin:

BOSTON, Oct. 1, 2015 – According to catastrophe modeling firm AIR Worldwide, originally classified as a tropical depression late on September 27, Joaquin developed into a Category 1 hurricane yesterday, undergoing rapid intensification to become a Category 4 storm as of the National Hurricane Center’s (NHC) 2:00 p.m. EST advisory. Within the next 12 to 24 hours, Hurricane Joaquin is expected to further intensify, and then later weaken to tropical storm strength.

“Hurricane Joaquin is reminiscent of Hurricane Irene (2011), which impacted the Central Bahamas as a Category 3 hurricane,” said Scott Stransky, manager and principal scientist at AIR Worldwide. “Although roof damage was prevalent as a result of that storm, there was very little structural damage due to the well-built properties in the Bahamas. Irene tracked west of several islands including Abaco Island, which contains the third highest insured property value after New Providence and Grand Bahama. Irene’s large size meant that almost all of the Bahamas was subject to strong winds for more than a day. AIR conducted a damage survey in the Bahamian islands of New Providence, Eleuthera, Abaco, and Green Turtle Cay following Irene. As expected, wind damage to well‑built concrete structures was limited to roofs, while less prevalent wooden structures suffered more substantial damage. Commercial properties suffered significant damage to signage.”

“One of the lessons learned from Irene was that, while the take-up rates in New Providence Island (Nassau) and Grand Bahama Island (Freeport) are high, the take-up rates on other islands of the Bahamas—which are currently being impacted by Joaquin—are quite low. This should help limit insured losses. In 1999, Hurricane Floyd battered the northwestern Bahamas with Category 3/Category 4 winds, causing widespread damage and disruption to several islands. Like Irene, Hurricane Floyd was a very large storm with tropical storm force winds extending some 580 miles across. In contrast to Hurricane Irene, however, Floyd passed to the east of the islands, meaning that its strongest winds on the right side of the storm remained over water.”

According to AIR, most houses in the Bahamas are of concrete block or poured concrete construction, although unreinforced masonry and timber construction are also used. Roofs are usually covered with asphalted wooden roof tiles, although corrugated iron and aluminum roofs and Spanish tile are not uncommon. Most residential dwellings are single-story, while commercial buildings can be mid- or high-rise. When subjected to Category 4 wind speeds, non-engineered structures can experience destructive damage to roof and wall components, and light metal structures can experience severe structural damage. Structures can sustain severe non-structural damage and unprotected windows may be damaged by flying debris. Additionally, Category 4 winds may cause widespread severe damage to signage, trees, and poles. Business interruption losses may also be significant, due to both direct physical damage to hotels and resorts, and damage to supporting utilities.

Stransky continued, “Joaquin has been meandering over or near the easternmost Bahamas since yesterday. However, a turn toward the north and an increase in forward speed is expected sometime tomorrow. What Joaquin will do once it departs the Bahamas remains highly uncertain. The forecast tracks have generally shifted eastward since yesterday and the center of NHC’s cone of uncertainty has the storm tracking toward the Carolinas with a possible landfall there or in the Mid‑Atlantic states as a hurricane on Monday, or New England as a tropical storm on Tuesday. There is a wide dispersion in the models, however, with some—most notably GFDL and HWRF—still taking Joaquin into North Carolina on Sunday, while the GFS and UKMET office keep the storm away from the U.S. coastline altogether. Additionally, the ECMWF, one of the top models, has consistently shown Joaquin going toward Bermuda instead of the U.S.”

Stransky concluded, “As Joaquin moves northward, it will encounter cooler water and increased wind shear, both of which should weaken the storm. Other mitigating factors include the possibility of eyewall replacements and the inclusion of dry air.”