Hurricane Gonzalo, a major Category 4 storm, continues to head for Bermuda and looks set to impact the island heavily over the coming day or so. Here are some of the latest updates, tracking maps and forecast model information.

Latest position update from the NOAA.

The latest update on Gonzalo from AIR Worldwide.

The latest update on Gonzalo from Impact Forecasting.

Hurricane Gonzalo has weakened again slightly, but remains a strong and dangerous Category 3 storm with sustained winds of 125mph and higher gusts. The center of Gonzalo is now just 150 miles from Bermuda and approaching at 16mph and tropical storm winds are beginning to affect Bermuda (see the surface wind-field graphic below).

The NHC expects the eye of Gonzalo will be near Bermuda by early this evening and Gonzalo is expected to be a dangerous hurricane when it moves near or over Bermuda.

The latest update from the NHC shows that hurricane Gonzalo is maintaining its 130mph sustained winds as it draws nearer to Bermuda. The hurricane is now just 195 miles SSW of the island, approaching at 15mph. Some slow weakening is expected as the day passes, but the expectation is for hurricane Gonzalo to still be a Category 3 storm when it nears Bermuda.

The image below shows the hurricane and tropical storm force wind field from Gonzalo in contrast to the size of Bermuda, as well as the forecast track. On this path all of Bermuda will experience strong hurricane force winds for a number of hours.

Also, here is a recent satellite image, along with the forecast path, which clearly shows the size of Gonzalo as it approaches Bermuda. 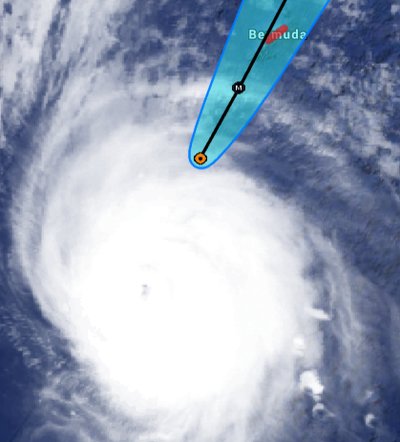 Finally, there is a working webcam at the Dockyard area of Bermuda. Currently it shows the weather worsening and winds beginning to rise. This webcam is unlikely to continue broadcasting right through the storm, but provides a useful way to monitor the hurricane’s approach.

We continue to wish our friends and contacts in Bermuda well and hope all on the island remain safe.

Hurricane Gonzalo has weakened a little as it nears Bermuda, with maximum sustained winds now down to 130mph but with higher gusts around the eye of the storm. Located 240 miles SSW of Bermuda and now approaching more rapidly at 15mph, Gonzalo is expected to affect Bermuda with tropical storm force winds for much of today and hurricane force winds for at least 6 hours later on Friday.

The NOAA warns of “damaging winds and a life-threatening storm surge” affecting Bermuda later today. The storm surge could be 8ft or even higher, according to forecasters.

Gonzalo has again grown in size, which worsens the outlook for Bermuda somewhat as it means the strongest winds will affect the island for longer. Hurricane Gonzalo now has hurricane forces winds extending 60 miles out from the center and tropical storm force winds extending up to 175 miles out.

Hurricane Gonzalo, the seventh named storm of the 2014 Atlantic Hurricane Season, is currently carrying maximum sustained winds of 145mph and gusts of up to 170mph towards Bermuda. The Category 4 storm has not yet shown any signs of weakening, instead intensifying gradually through the day. As it has intensified the forecast path has moved nearer to Bermuda, although it still shows the storm passing a little off the western shore of the island.

It’s not just the winds that are a threat to Bermuda. Brian Owens, meteorologist and senior director at RMS, told Artemis; “The intensity and long-duration of Gonzalo prior to reaching Bermuda may drive dangerous storm surge towards the island’s southern coastline.”

Owens said that while the forecast still shows the center of Gonzalo tracking slightly to the west of Bermuda, there’s a 50% chance that the entire island will be hit by at least hurricane force winds.

Updates from some of the reinsurance risk modelling firms can be found below these tracking maps.

The closer Gonzalo gets to Bermuda without deviating the more likely the storm will have a potentially deadly impact on the island. It is still to be hoped that Gonzalo is steered as far offshore from the island as possible and we hope our friends and colleagues there remain safe. Currently Gonzalo is expected to make it’s closest pass to Bermuda late Friday night into Saturday morning.

CURRENT WATCHES AND WARNINGS
A Hurricane Warning is in effect for Bermuda.

DISCUSSION
Major Hurricane Gonzalo, located approximately 195 miles (310 kilometers) south-southwest of Bermuda, is currently tracking north-northeast at 15 mph (24 kph). Gonzalo appears to be slowly filling. Satellite imagery shows a slight degradation in the organization of the cloud pattern over the last 12 hours, with somewhat warmer cloud top temperatures within the central dense overcast and some erosion of deep convection over the western semicircle of the circulation. Satellite data suggest also that current eyewall replacement is nearly complete, with the last vestiges of the inner eyewall dissipating within a larger eye feature. The NHC has lowered the initial intensity to 130 mph (210 kph), and the next Air Force reconnaissance aircraft should arrive shortly to better assess Gonzalo’s intensity and structure.

With Gonzalo encountering slowly increasing shear and over somewhat cooler waters, only gradual weakening is expected during the next 12 to 24 hours. Regardless, Gonzalo should remain a dangerous hurricane as it passes Bermuda later today. After 24 hours, a steady increase in south-southwesterly vertical wind shear and sharply colder sea surface temperatures should contribute to a markedly faster weakening. Gonzalo is likely to transition into a post-tropical cyclone in about 48 hours and become extratropical in 60-72 hours. The NHC intensity forecast is similar to the previous one, and is about halfway between the model consensus.

The initial motion estimate is towards the north-northeast and slightly faster than before. Gonzalo should accelerate further on roughly the same heading during the next couple of days as the hurricane is swept up in the south-southwesterly flow ahead of an approaching trough currently over the eastern United States. A turn toward the east-northeast and east with an additional increase in forward speed is then forecast when Gonzalo nears Canada’s Newfoundland in about 48 hours. The new NHC track forecast is close to the previous one but a bit slower to account for a slower trend in much of the track model guidance.

Significant coastal flooding on Bermuda is likely if Gonzalo continues on the current NHC forecast track. Although specific amounts cannot be forecast for Gonzalo, Hurricane Fabian produced an estimated 10 feet of storm surge when it moved over Bermuda as a major hurricane in 2003, and similar values could occur with Gonzalo.

Hurricane conditions are expected to reach Bermuda this afternoon, with tropical storm conditions beginning later this morning. It should be noted that wind speeds atop and on the windward sides of hilly terrain are often up to 30 percent stronger than at the surface, and in some elevated locations can be even greater.

A dangerous and life-threatening storm surge is expected to produce significant coastal flooding in Bermuda. Near the coast, the surge will be accompanied by large and destructive waves.

Gonzalo is expected to produce total rain accumulations of 3 to 6 inches over Bermuda.

Large swells generated by Gonzalo are affecting portions of the Virgin Islands, the northern coasts of Puerto Rico and the Dominican Republic, portions of the Bahamas, portions of the southeast coast of the United States, and Bermuda. Swells will spread northward along the U.S. East coast today. These swells will likely cause life-threatening surf and rip current conditions.

BOSTON, Oct. 17, 2014 – According to catastrophe modeling firm AIR Worldwide, although Hurricane Gonzalo weakened slightly overnight, it is still a powerful Category 3 storm packing maximum sustained winds of 125 mph. Its hurricane-force wind field has expanded to 60 miles in diameter. The center of the National Hurricane Center’s cone of uncertainty places Gonzalo just 10 miles west of Bermuda at its closest pass by the island, which is anticipated to be on the right-hand side of the storm and therefore bear the brunt of Gonzalo’s impacts. At its closest pass, Gonzalo is expected to still be a Category 3 hurricane.

Stransky noted, “Gonzalo is taking a similar path with similar intensity to Hurricane Fabian, which caused between USD 250 and USD 300 million of damage on the island (in 2003 dollars). Fabian, which struck Bermuda in 2003 as a Category 3 hurricane but impacted no other land mass, has since had its name retired.”

Stransky observed, “Gonzalo will be the second storm to impact Bermuda in a week, following close behind Tropical Storm Fay, which knocked out the power to nearly everyone on the island. There is still debris scattered across the island that was left behind by Fay—consisting mainly of trees, tree limbs, and coconuts—and power has not yet been completely restored.”

There are concerns that Gonzalo will cause this debris to become airborne as it passes by the island tonight, causing more damage than would heavy winds alone. Unprotected windows and sliding glass doors on balconies will be very vulnerable to flying debris. Once these openings are compromised, structural damage may occur, which will result in damage to contents and interior finishes.

It is likely that Gonzalo will cause additional damage to trees, electricity poles, and communications towers. Damage to roofs is also expected.

After impacting Bermuda, Gonzalo is forecast to head toward Newfoundland as an extratropical cyclone, where power outages, flooding, downed trees, and rough surf could be experienced late Saturday.