The third-quarter saw significant proportions of catastrophe losses retained by insurers, due to the proliferation and aggregation of multiple smaller loss events. But the fourth-quarter could see that trend reverse, if insurers breach the retained proportion of their aggregate reinsurance covers, analysts at Jefferies have explained.

In a new report, Jefferies analyst team highlights the continued aggregation of smaller catastrophe loss events through the third-quarter, with overall global insured catastrophe losses in October 2020 below the long-term average, but year-to-date in 2020 sitting 17% higher than the long-term average (2008-2019) and 7% higher than the 10-year average.

Q3 results showed that catastrophe budgets have been breached by some, with Jefferies warning that severe weather losses have been a major contributor to this.

However, overall catastrophe and severe weather losses remain broadly manageable across the market, Jefferies believes, but insurers that are suffering may find some support from reinsurance capital as we move through the rest of the fourth-quarter.

“The aggregation of smaller size events appears to have led to a higher proportion natural catastrophe claims remaining on insurance rather than reinsurance balance sheets,” Jefferies analysts note.

Adding that, “This trend could reverse in 4Q if further small size losses push insured losses above the retained proportion of aggregate covers and then onto reinsurers.”

Insured loss data suggests that while frequency is high in 2020, the severity of catastrophe loss events remains lower.

Higher catastrophe loss ratios at insurers have resulted in some reinsurance support, but in many cases aggregate reinsurance arrangements have not yet been tapped, despite the proliferation of multiple smaller events.

Reinsurers, year-to-date, have seen losses that only slightly exceeded their catastrophe budgets because of this, Jefferies said.

But, “This could change as year-end approaches and aggregate covers hit their retentions, with possibly a higher proportion of 4Q losses hitting reinsurance balance sheets than the first 9 months.”

Of course, there are also aggregate catastrophe bonds to consider here and a number have already been marked down on secondary pricing sheets as the erosion of aggregate deductibles continues in 2020.

Jefferies analysis of the data on insured catastrophe losses year-to-date suggests that 2020 is running at just above the $70 billion mark so far. 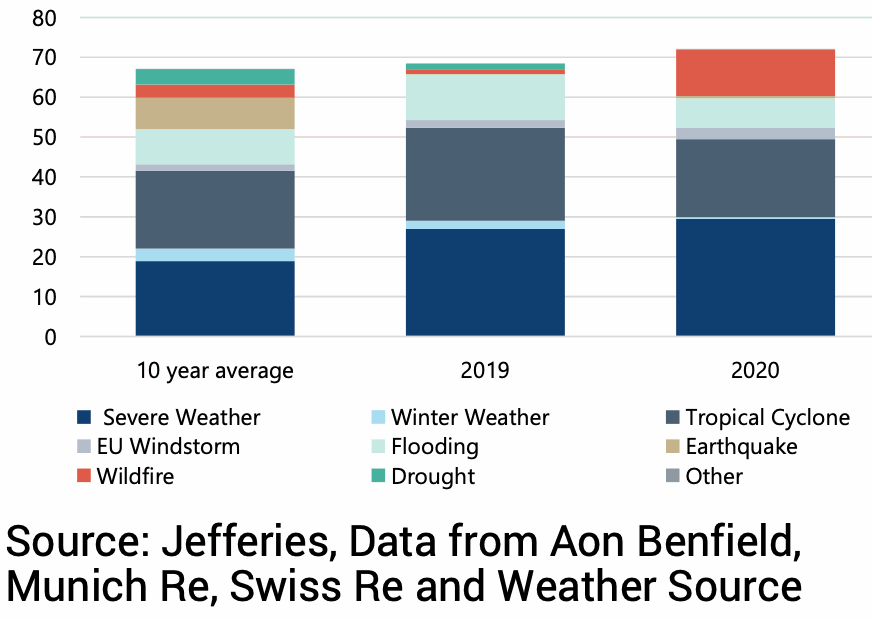 That’s above the insurance and reinsurance industry catastrophe loss bill from 2019 and also above the ten-year average.