Florida headquartered property and casualty insurer and parent of Homeowners Choice Property & Casualty Insurance Company, Inc., HCI Group, Inc., has secured a catastrophe reinsurance tower that provides it with almost $1.5 billion of limit on a first and second event basis.

At the reinsurance renewal HCI Group has continued with a 45% participation rate in the Florida Hurricane Catastrophe Fund (FHCF), using this sliver largely for its first-event coverage, but with a small element also able to cascade across into for use in a second-event tower as well.

The 2019/20 catastrophe reinsurance program is actually a little smaller than the prior year, as from now HCI Group benefits from coverage up to approximately $901 million for catastrophic losses in a single event, excluding flood losses.

Last year, HCI had reinsurance coverage of up to $968 million for the first-event, with an identical $16 million retention to this year’s and the same 45% FHCF participation.

HCI notes that this is sufficient, based on Florida Office of Insurance Regulation approved cat models, to cover its probable maximum loss resulting from a 1 in 282-year storm, based on projected exposure at September 30th 2019.

After a $901 million loss that wipes out the first-event catastrophe reinsurance tower, HCI will benefit from $608 million of protection for a second-event, after another $16 million retention.

That’s sufficient to cover a 1-in-144 year loss event, according to the catastrophe model used, which is RMS. 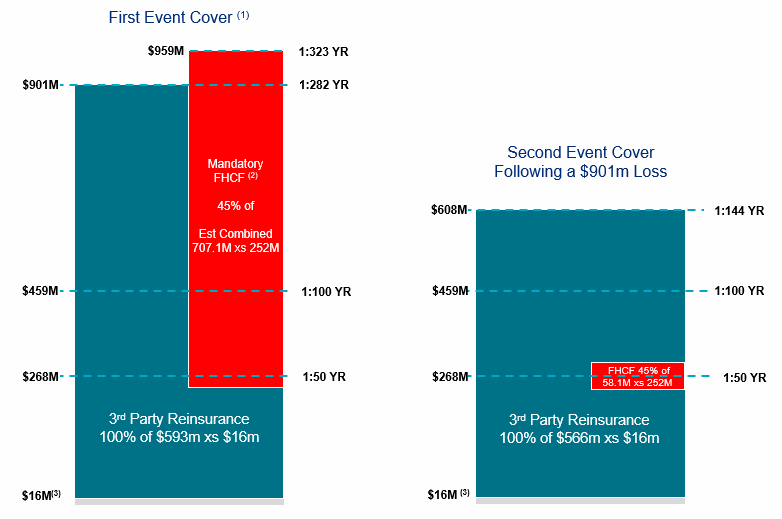 Combined, that gives HCI Group a total reinsurance limit for all occurrences, excluding flood losses, of $1.477 billion for the 2019-20 year.

Costing comes out roughly the same as the prior year’s program, with HCI saying that it expects total ceded reinsurance premiums for the 2019-2020 contract year to be around $124 million, which compares to the $123 million of net reinsurance costs the company revealed last year.

As ever, it’s impossible to really tell the cost-comparability of the program renewal, as so many terms are not disclosed and these really matter to the responsiveness of the coverage and the terms of any reinstatements.