Guy Carpenter says that the cat bond market withstood the impact of onerous market forces in 2008, brought on by turmoil in the global capital markets. The briefing found that as a whole, in terms of issuance volume, 2008 was the market’s third most active year since catastrophe bonds were introduced in 1997, accounting for 11 percent of all issuances. Thirteen issuances, all but two of which occurred in the first half of the year, brought $2.7b in new and renewal capacity to market in 2008, according to Guy Carpenter’s findings. After a record-setting year in 2007, cat bond issuance in 2008 fell 62 and 52 percent in terms of risk capital and number of transactions, respectively.

See the graph below for issuance by year: 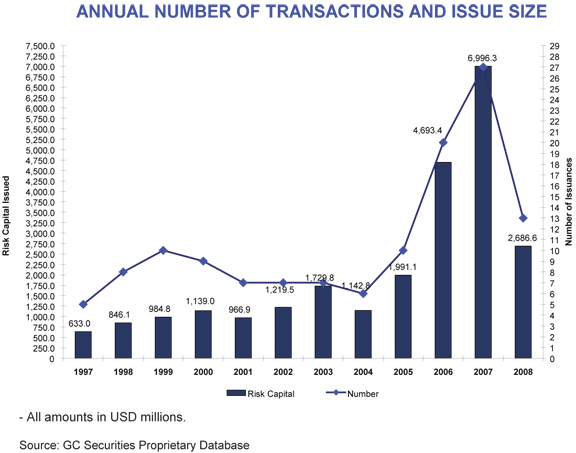 The report also mentions the fact that from September 2008 several firms who were planning catastrophe bonds decided to defer those to 2009, a reference to the failure of Lehman Brothers and associated issues that affected the market in the later part of the year.

The fact that so many deals made it out last year and that we have one due to issue any day now (Atlas Re V) just demonstrates the resilience of the market and the fact that investors still perceive it as a non-correlated alternative to more traditional investment tools. Perhaps that perception is not as bulletproof as it once was, but issuers, risk modellers and deal structurers can all help to improve the perception of cat bonds through wise choices of counterparties and innovative uses of risk modelling technology to negate risk (and perception) of correlation. Although 2008 was low in terms of issuance, the $2.7b that did get issued was still above the markets annual average.

This all bodes well for the insurance-linked securities markets in 2009.