The Global Property Catastrophe Rate-On-Line Index, a proprietary index of global property catastrophe reinsurance Rate-on-Line movements, on brokered excess of loss placements, that has been maintained by broker Guy Carpenter since 1990, rose by 6.1% at January 1st, reflecting the price increases achieved by reinsurers at renewals.

The rise in Guy Carpenter’s main reinsurance rate-on-line index, the longest tracked such index in the marketplace, is the first since 2012, when rates-on-line increased by 9.5%, according to the index.

Following that, the index has declined steadily each year, sitting over 30% lower before the recent renewals and the 6.1% rebound at January 2018.

Guy Carpenter explained, “The Guy Carpenter Global Rate on Line Index, measuring the change in catastrophe premiums year over year, increased 6.1 percent. This was driven by the impact of large loss activity and exposure growth, as reinsurers’ focus on flat risk adjusted pricing led to higher premiums for increased exposure.”

That suggests that some reinsurers were taking an opportunity to try to regain some market share at 1/1, offering flatter rate increases in return for larger signings, an interesting dynamic that may be a response to the increasing threat that ILS markets pose to some reinsurers renewal books. 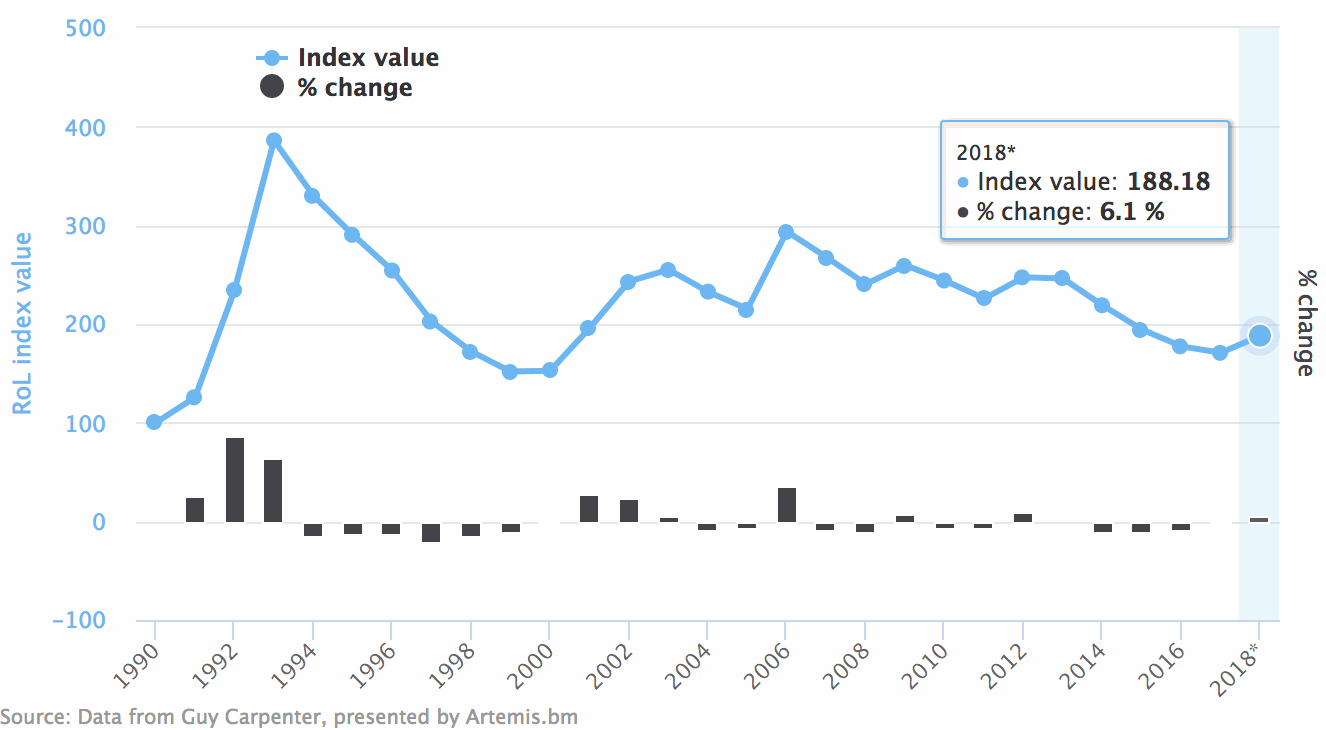 The flattening of the reinsurance market cycle is clearly evident in the rate-on-line index. Gone are the days of huge rises, as the weight of capital in reinsurance, both from traditional players and the growing alterative market, moderate the ability of underwriters to command price increases.

Ultimately this benefits the insurance consumer, as cheaper and more stable reinsurance pricing can only help to make the end-product a more cost-effective proposition, which in a time where the industry is focused on narrowing coverage gaps can only be a good thing.

There is a chance of further rate increases at the April and June/July reinsurance renewals and underwriters will be hoping for at least something comparable to the rate environment at 1/1.

But there are no guarantees and with ILS capital having grown again in 2017, coming out the other side of the renewal larger than it went into it, the effect of capital weighing on reinsurance rates at upcoming renewals may be even more strongly felt.

“Unlike past firming events where supply and demand imbalances and shifting views of risk drove rates higher, the 2017 events were largely within model parameters, and overall industry capital did not decline. Assessment of the market response will continue through the spring, when many of the most heavily loss-impacted programs renew,” Guy Carpenter said.