Natural catastrophe and severe weather events have driven the second-highest ever first-half losses for the insurance and reinsurance industry, according to Swiss Re.

With natural catastrophe insured losses of US $40 billion and another $2 billion of man-made losses recorded by the reinsurance giant’s Swiss Re Institute researchers in the first-half, it puts 2021 on-track to be another year where losses rise above the long and near-term averages.

The $40 billion of natural catastrophe losses covered by insurance or reinsurance, are the second highest on record for a first-half after 2011, Swiss Re explained.

At $15 billion, winter storm Uri is estimated as the largest loss event of the first-half of 2021 and the highest ever loss from winter storms in the US.

At the same time, the high incidence of winter storms, intense heatwaves and severe flooding around the globe continue to demonstrate the growing risks from secondary perils, which Swiss Re says are fueled by rapid urban development and climate change.

The previous ten-year average for global insured natural catastrophe losses is $33 billion, so 2021 is running well ahead of the average so far. 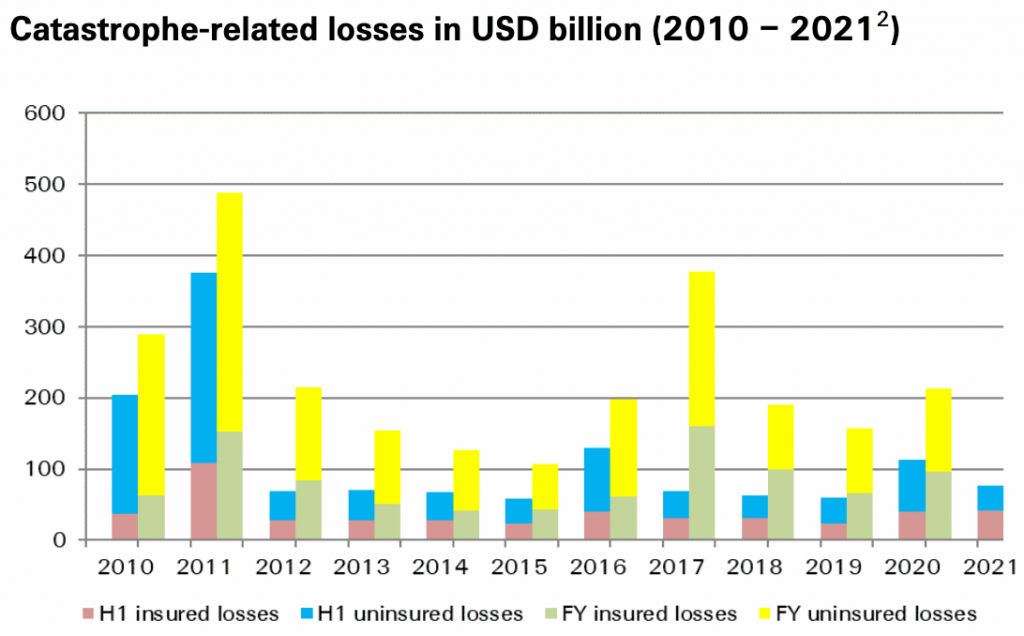 Martin Bertogg, Head of Cat Perils at Swiss Re, commented, “The effects of climate change are manifesting in warmer temperatures, rising sea levels, more erratic rainfall patterns and greater weather extremes. Taken together with rapid urban development and accumulation of wealth in disaster-prone areas, secondary perils, such as winter storms, hail, floods or wildfires, lead to ever higher catastrophe losses.

“The experience so far in 2021 underscores the growing risks of these perils, exposing ever larger communities to extreme climate events. For example, winter storm Uri reached the loss magnitude that peak perils like hurricanes can wreak. The insurance industry needs to upscale its risk assessment capabilities for these lesser monitored perils to maintain and expand its contribution to financial resilience.”

érôme Jean Haegeli, Swiss Re’s Group Chief Economist, added, “Climate change is one of the biggest risks facing society and the global economy. The recent analysis from the UN’s Intergovernmental Panel on Climate Change confirms expectations of more extreme weather in the future and urgency to act to limit global warming. Working with the public sector, the re/insurance industry plays a key role in helping to strengthen communities’ resilience by steering development away from high-risk areas, making adaptation investments, maintaining insurability of assets and narrowing protection gaps.“

Economic losses are running below average so far this year, at $77 billion, well below the $108 billion average for the last ten years.

This isn’t really a sign of any narrowing of protection gaps, rather it is down to where disasters struck and thee type of disasters that affected the globe in the first-half of 2021.