Globally, catastrophe losses that fall to the insurance and reinsurance industry are already near $100 billion, according to analysis from broker Aon, which estimates the total at $99 billion so far, including an amount for hurricane Ian.

Aon’s Impact Forecasting division explained in its latest report that by the end of the third-quarter of 2022, global economic losses from natural catastrophe and severe weather events had reached an estimated $227 billion.

Of that, $99 billion is currently estimated to have been covered by the public and private insurance and reinsurance industry, according to the broker.

It puts global insured catastrophe losses easily on-track for over $100 billion again this year, which will be the third year in a row losses have hit that level, Aon notes.

For the first three-quarters of the year, Aon said that, “Aggregated losses sustained by the insurance sector were anticipated to notably exceed averages since both 2000 and 2012 and approach the average of the last 5 years.”

Hurricane Ian is a wild-card here, as Aon does not disclose the industry loss pick it has used for that event, just saying it is based on publicly available estimates.

As a result, Aon said, “This comparison is highly dependent on the eventual financial outcome of Hurricane Ian, which hit the United States at the end of September. While initial estimates suggest that total losses from Ian will likely run into the tens of billions USD, it is expected that the final numbers will not be settled for months to come. This type of loss development is standard and expected in the aftermath of larger scale events. ”

So far, losses in the United States make up around 70% of the global insured cat loss total.

Secondary perils were very active in the first-half of 2022, but hurricane Ian’s impacts in Q3 have tipped the balance and meant that primary perils are now catching up on their insured loss contribution, as you can see below. 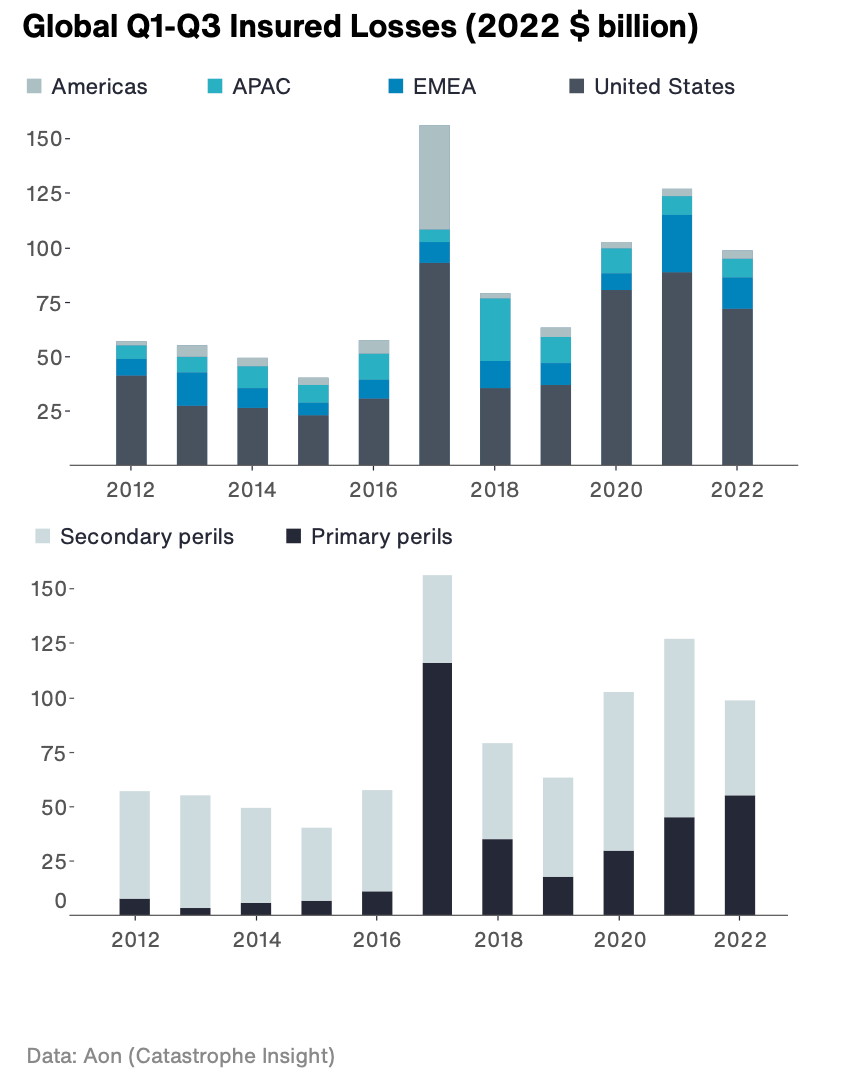 Looking to the fourth-quarter, Aon’s Impact Forecasting team explained, “It is anticipated that there will be robust loss development especially with the realization of cost(s) associated with late tropical cyclone development worldwide. Recurring La Niña conditions and the likelihood of above normal hurricane activity can potentially trigger impactful events in the remaining quarter, with additional costs arising from inflationary pressure.”

The Aon team also warned that, on hurricane Ian, there is an expectation that the eventual industry loss will be negatively affected by demand surge, inflation and other factors.

2022 had been heading towards becoming a year of average, to even below average, insured catastrophe losses, but hurricane Ian has certainly changed the direction of travel and insurance and reinsurance firms are going to be reporting significant impacts over the coming weeks of results.