The German insurance industry is facing a loss of $1.4 billion (EUR1.2 billion) from the two storms Elvira and Friederike, as well as other severe weather, which struck the country from May 27th to June 9th 2016, according to association the GDV. 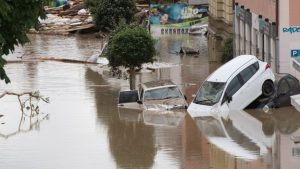 The GDV (or Gesamtverband der Deutschen Versicherungswirtschaft) has now issued an official estimate for the extent of storm and flood losses that will come back to the insurance and reinsurance industry, and the losses are expected to depress earnings for the local industry.

Around $1.13 billion of the loss is due to damage to insured residential property, contents, commercial and industrial risks, with the remainder related to auto insurance claims, according to the GDV.

“Never before have caused storms with heavy rainfall in such a short time such a high damage,” commented GDV president Alexander Erdland on Thursday.

In 2015, property insurers in the country paid a total of around EUR2 billion for natural catastrophe and weather claims across the entire year.

The insurance and reinsurance industry loss could have been far more severe, where natural catastrophe cover to have greater penetration in Germany. The GDV explained that just 40% of residential property has this type of cover for elemental damage, despite over 99% of all buildings being easily insurable against flooding or heavy rainfall.

The losses from the German storms and floods are expected to weaken the underwriting profitability of the local insurance sector and, especially on top of losses in France and other European countries from the same storm systems, are expected to hit some reinsurance arrangements.

However the impact to reinsurance markets will be minimal, with German direct writers understood to retain a significant proportion of property losses due to elemental events, while in France the designation of the event as a natural catastrophe means that state-backed reinsurance firm CCR will deal with around half of the total industry loss, which it is estimated could settle at up to the $1.6 billion mark.

So the risk of a potential impact to ILS funds and investors is remote, although there are some aggregate European wide programs which the ILS market participates in that could see deductibles eroded further by these storm related losses.

– French flood insurance loss estimated at up to $1.6 billion: AFA.

← Older article Might not be for Buffett, but ILS shows reinsurance is a desirable asset class

Might not be for Buffett, but ILS shows reinsurance is a desirable asset class

Analysts at Bernstein have highlighted continued pressures in the global reinsurance marketplace, noting recent divestment in the sector by Warren...