While remediation efforts for the damaged turret on the Kwame Nkrumah FPSO (floating production storage and offloading) operating on the Jubilee oil field, Ghana are well underway and progress being made, this work will mean a further shutdown of production that could escalate insurance and ultimately reinsurance costs. 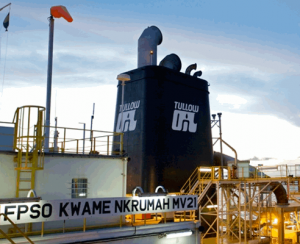 The floating production, storage and offloading vessel (FPSO) operated by Tullow Oil on the Jubilee oil field off Ghana, Africa suffered a fault to a bearing on the turret in March 2016, resulting in a loss of production of approximately 15% of output per day.

That triggered an insurance claim under a Hull & Machinery cover for Jubilee had been confirmed by and also triggered a business interruption cover as well, becoming one of the largest man-made or industrial insurance and reinsurance losses of the year.

Industry loss estimates for the impact to insurance and reinsurance markets continue to suggest a total impact of up to $1.5 billion from the Jubilee oil field FPSO event, but further shutdowns later this year have the potential to exacerbate this.

Market sources explained that the planned shutdown, due to work required to convert the FPSO to a permanently spread-moored vessel, could escalate the loss further than originally believed as the production level from the Kwame Nkrumah FPSO has been higher than anticipated so far this year.

The shutdown is expected to last up to 12 weeks and had been planned for 2017, but now Tullow Oil has said that the work may be completed in a number of phases.

A shutdown of the FPSO for between 5 and 8 weeks is planned for later this year, but two other pieces of work to rotate the FPSO to an optimal heading and install a deepwater offloading system are now expected to be completed in two more phases in 2018 and 2019.

While the total shutdown is still forecast to be 12 weeks, of course that number could be exceeded if one or all of these phases of remediation takes longer than planned.

But perhaps more of a risk to the business interruption loss, is the fact that the FPSO has been producing as much as 100,000 barrels of oil per day at times earlier this year, which we’re told is more than had been forecast by some re/insurers.

The business interruption policy has been reimbursing the equivalent of around 5,000 barrels per day, but a full shutdown could see the policy having to pay out more, we’re told.

Additionally, Tullow Oil expects that the total costs of the remediation works, the lost revenue resulting from the shutdown, and any increased operating costs while remediation work is undertaken, are anticipated to be covered by the Hull and Machinery insurance policy and Tullow’s corporate Business Interruption insurance coverage.

So there is clearly room for the loss to creep higher it seems, which could have the potential to hit reinsurance providers with greater losses than anticipated. There is much that could go wrong during the remediation work, extending the shutdown and escalating the business interruption costs. It’s also unclear how accurate forecasts of business interruption losses have been so far.

The Jubilee FPSO is a good example of a complex man-made loss event, demonstrating the complexity of repairs and remediation work to major industrial and commercial complexes or apparatus and the potential for escalating costs due to production declines or shutdowns.

The insurance-linked securities (ILS) funds that had an exposure to this loss event may not have to increase their estimates, as they are more likely exposed through property related energy lines, so the hull and machinery policy, rather than the business interruption. However retro contracts can pick up BI exposures, so there is still a possibility of some loss creep seeping into exposed ILS or collateralized reinsurance contracts.

It’s important to note that this shut down of production had been factored into most estimates, but that allowances had been made in loss estimates for a single period of work in 2017.

It’s not clear whether loss estimates have been fully updated to account for the fact it will be spread over two years or more, including the uncertainty that adds due to the potential complexity, and that the business interruption has a greater potential to escalate as well.

With remediation related shutdowns expected in both 2018 and 2019 it seems that we won’t know the final insurance and reinsurance industry loss for the Jubilee FPSO event for some time.