The Fort McMurray wildfires which devastated the city and area in recent weeks are estimated to have caused an insurance and reinsurance industry loss in the range of US$3.4 billion to US$6.9 billion, according to AIR Worldwide. 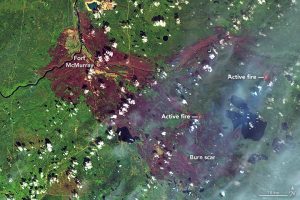 This is the first estimate of insurance and reinsurance industry losses from a specialist risk modelling company, and according to AIR Worldwide the Fort McMurray wildfires will become the most costly natural disaster in Canada’s history.

It’s important to note that any loss estimate provided now may be too low, as overnight reports from Fort McMurray show that fire’s are once again threatening the oil sands camps to the north of the city and workers have been evacuated again.

So insurance and reinsurance losses could rise further, which could raise the amount of the loss passed onto any exposed insurance-linked investment funds, ILS managers, collateralised reinsurers or reinsurance sidecar vehicles.

AIR Worldwide said that it estimates industry insured losses from the Fort McMurray, Alberta, Canada, wildfire, that started burning on May 1st, will be in the range of CAD 4.4 billion (US$3.4 billion) and CAD 9.0 billion (US$6.9 billion).

We’ve previously explained that there is an expectation that due to Canadian insurers conservative use of reinsurance arrangements, at least 50% of the insured loss is expected to be passed on to reinsurers and some to the ILS fund market.

Retrocession and reinsurance investment manager Markel CATCo said yesterday that it expects only an attritional impact to one of its flagship funds from this event. Other ILS and reinsurance linked funds are expected to face similar attritional losses, from exposed private ILS contracts, collateralised reinsurance and quota share deals.

Reinsurance sidecars are expected to be exposed, especially as some of the largest reinsurers are forecast to take some of the biggest shares of this loss, with an expectation that retrocession contracts will also be activated for this event.

That could impact direct investors in the sidecars, although again any exposure would not be expected to be particularly large, but that does also bring into play the mutual fund ILS offerings which invest heavily across the sidecar and quota share reinsurance market, which could see them suffer attritional losses across a range of positions in their portfolios.

AIR notes that assessment of the fire damage is still in the early stages and that as of Saturday 14th May the fire was still not contained and covered nearly 600,000 acres, but largely away from population centers.

AIR notes that winds in the area have eased and temperatures cooled, raising expectations that they will cool further still and weather conditions could be more on the side of the firefighters battling the blaze. However the reports of further oil sands camp evacuations, due to strong winds driving a fire northwards, show that the threat to lives and property has not diminished at this time.

AIR’s loss estimates, for an insurance and reinsurance industry impact of US$3.4 billion to US$6.9 billion, include insurance losses expected from residential, commercial, and automobile lines of business, as well as business interruption losses, but not including those related to the oil industry in the region.

Loss estimates were derived using AIR’s high-resolution Industry Exposure Database (IED) for Canada as well as damage ratios estimated from satellite imagery and historical U.S. wildfire claims adjustment experience. Exposure values from the IED that have been included in this loss estimate have been trended to January 1st 2016.

AIR says that losses from the Fort McMurray wildfire will be dominated by residential losses, with several neighborhoods experiencing a catastrophic loss. The insured loss estimate s based on assumptions of nearly 100% take-up rates in Alberta.

Economic losses are expected to be higher than industry insured loss estimates, the risk modeller said. The company also explained that the range in the loss estimates reflects uncertainty about additional living expense payments due to the mandatory evacuation of the city’s population, loss of some individual structures outside of the most affected neighborhoods, as well as the expected widespread but smaller losses due to smoke, loss of electricity, and damage from suppression efforts, which of course will add up.

AIR explains the situation in the area due to the wildfires:

The evacuation orders for Fort McMurray, Anzac, and Fort McMurray First Nation remain in effect, and it will be at least a week or two before officials can say when residents will be able to return. A mandatory evacuation notice and State of Local Emergency were issued on the night of May 15 for the Municipal District of Greenview. This alert applies to Little Smoky area residents. Highways in the area are closed, down to one alternating lane, or restricted to essential travel only. A Boil Water Advisory is in effect for all areas receiving water from the Fort McMurray water system. An open fire ban throughout Alberta is in place, and a fire ban is in effect in the northwest forest of Saskatchewan, as the Fort McMurray fire had spread to within 13 kilometers of Saskatchewan’s border.

The airport, water treatment plant, municipal building, hospital, and all functioning schools were safeguarded. The airport continues to be used only for wildfire aircraft operations, however, and is closed to commercial and private aircraft until further notice. Current information suggests that a total of more than 2,400 structures have been lost—roughly 10% of the total.

Downtown Fort McMurray apparently experienced little damage, and Gregoire and Saline Creek to the south appear to be unscathed. The western side of Wood Buffalo and the neighborhoods of Beacon Hill, Abasand Heights, and Waterways south of the downtown area, however, have suffered catastrophic losses.