Forecasters confidence that Atlantic hurricane season will be active increases

Two of the most respected hurricane forecasters have updated their predictions for the 2013 Atlantic Hurricane Season today. The Colorado State University team has kept the number of storms and hurricanes it forecasts the same, but says its confidence in the forecast has increased. Meanwhile Tropical Storm Risk has very slightly increased its forecast numbers.

The CSU forecast remains unchanged at 18 named tropical storms, 9 hurricanes and 4 major hurricanes of Category 3 strength or higher. The CSU tropical forecasting team continue to foresee a very active 2013 Atlantic hurricane season. They say that the tropical Atlantic remains warm and they do not expect an El Nino of any significance to develop in the Pacific.

Given the above average forecast CSU is also calling for an above average chance of major hurricanes making landfall in the U.S. and Caribbean throughout the 2013 season. They give a 72% chance of a major Category 3 plus hurricane making landfall anywhere on the U.S. coastline, the long-term average is 52%. For the U.S. east coast including Florida they say the chances are 48% that a major storm will strike, with the average being 31%. For the Gulf Coast they give a 47% chance of a major hurricane strike, again well above the average of 30%.

The CSU team also note the significantly above normal temperatures of the eastern Atlantic ocean, where many major storms form. This combined with lower than normal wind shear in that region and an expectation that trade winds may be lighter than normal, gives the CSU team increased confidence in their forecast for a very active Atlantic hurricane season.

You can read the full forecast from CSU at their website.

Meanwhile the Tropical Storm Risk team has very slightly increased their forecast for the 2013 Atlantic hurricane season. They now forecast 15.6 named storms (up from 15.2), 7.7 hurricanes (up from 7.5) and 3.5 major hurricanes above Category 3 in strength (up from 3.4). Small increases, but these are telling as they again show an increased level of confidence in the 2013 hurricane season being particularly active.

TSR cite the forecast for north Atlantic trade winds and the expectation of above normal sea surface temperatures in the Atlantic as their two predictors for an active season.

TSR forecasts that 2 hurricanes and 4.5 tropical storms will make landfall on the U.S. coastline, both figures are above the long-term averages of 1.5 and 3.1 respectively.

Again, you can find the full forecast on the TSR website.

So all indications continue to point towards an above average Atlantic hurricane season in terms of activity and in terms of landfalls.

As we wrote last Friday here, the tropics are already heating up as some of the remnants from Pacific hurricane Barbara have moved into the Gulf of Mexico. The latest from the NOAA suggests that there is now a 40% chance that these remnants, which now form a large depression over the central Gulf, could become a tropical system within the next 48 hours. Whether this area of low pressure does attain tropical status or not, it is destined to bring a lot of rainfall to wherever it moves ashore on the U.S. mainland making it worth watching. 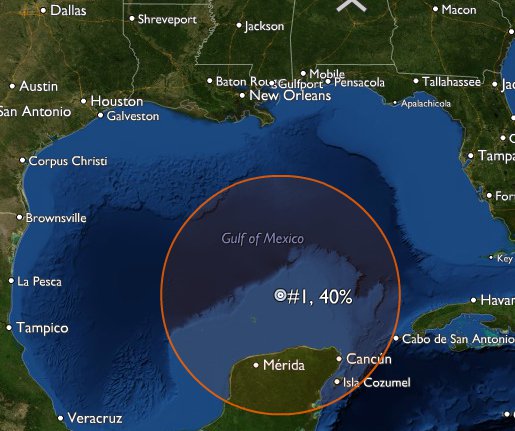 Gulf of Mexico disturbance with potential for tropical development

As ever, keep in touch with the hurricane season as it develops with our 2013 Atlantic Hurricane Season page.