At the same time Florida Citizens has shifted the attachment of one of its outstanding catastrophe bond transactions, bringing it into a position where it will serve to replace some of the aggregate reinsurance, while that coverage is shifted down the tower alongside the Florida Hurricane Catastrophe Fund (FHCF) protection.

It’s a fairly significant change in reinsurance strategy for Citizens this year, as you can see from the layer diagrams further down in this article. But the shift does make sense, providing greater protection for the biggest events, while perhaps making better use of the cat bond aggregate protection for multiple smaller events.

The change in strategy is also likely a reflection of the changing portfolio of risk held by Florida Citizens, which has gone from over 1.5 million policies to fewer than half a million in just a few years thanks to its depopulation program.

Florida Citizens plans for its 2016 risk transfer and reinsurance program will see the insurer with $2.464 billion of coverage for the year, with the third year of the record sized $1.5 billion Everglades Re Ltd. (Series 2014-1) and the second year of the $300m Everglades Re II Ltd. (Series 2015-1) catastrophe bond’s providing a significant proportion of the coverage (on an annual aggregate basis).

Shifting the aggregate multi-year reinsurance coverage to sit alongside and wrap around and above the FHCF protection, as single year per-occurrence reinsurance protection will cost Citizens around an additional $15.4m, the insurer expects. 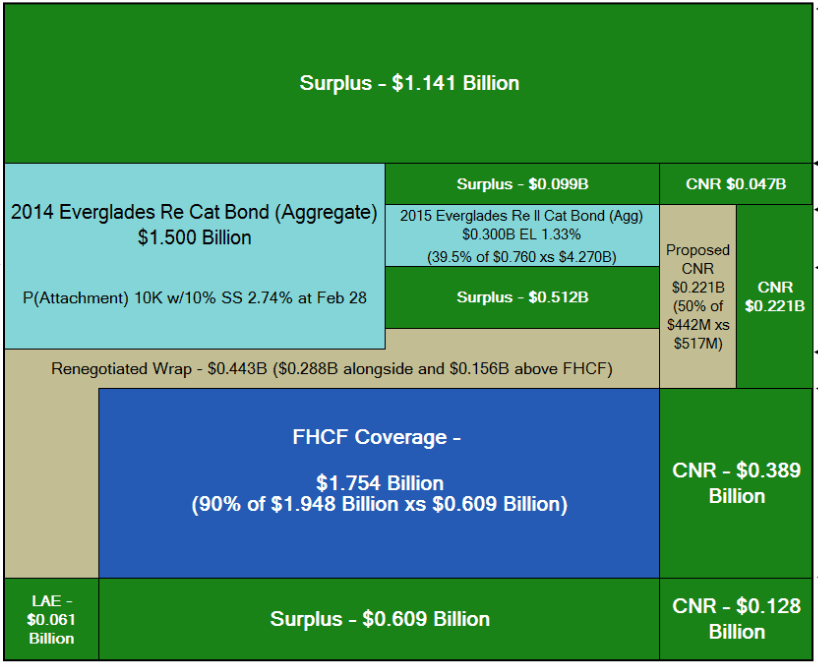 The restructure of the reinsurance and capital markets risk transfer, or cat bonds, helps Florida Citizens to maintain its coverage for a 1-in-100 year hurricane event, as requird by its enabling statute.

Citizens said that it recognises that “the event most likely to trigger assessments would be a catastrophic hurricane or series of hurricanes striking Florida.”

With the catastrophe bonds and the renegotiated traditional reinsurance, some of which will of course likely be going to collateralised or ILS fund players, Florida Citizens would have $2.243 billion of risk transfer for the 2016 season.

Additionally, Citizens wants to secure another layer of reinsurance for $221m of commercial non-residential risk (CNR), which would sit as a layer that equates to 50% of these risks in excess of $517m of losses.

In total, with the CNR coverage, Citizens would have $664.3m of traditional reinsurance coverage for 2016, to add to the $1.8 billion of catastrophe bond coverage, providing the $2.464 billion we mentioned above.

The overall goal with the 2016 risk transfer and reinsurance strategy is to “retain a portion of surplus for most catastrophic events, ultimately further reducing the amount and likelihood of assessments beyond the 1-100 year event to the citizens of Florida,” according to Citizens.

By doing so the insurer better protects Floridians against the risk of assessments, something which if a major hurricane occurs can become a burden for residents.

Of course, the fact that Florida Citizens has managed to shrink its risk transfer from the record $3.9 billion it had in-force for the 2015 hurricane season, down to the just $2.464 billion it will require for 2016, while meeting the statuted 1-in-100 year event protection, is testament to the de-risking of its portfolio through depopulation.

It’s also testament to the power of capital markets coverage, as the Everglades catastrophe bonds continue to dominate Citizens risk transfer program for another year.

While Florida Citizens may be buying less coverage, the primary insurers that have assumed the depopulated policies will need more reinsurance, so the market likely breaks relatively even in terms of reinsurance demand, as it shifts from Citizens to the private market.

The Board of Florida Citizens will be voting on the proposed risk transfer purchase at a meeting held today. The total cost for Citizens to secure the renegotiation of its aggregate reinsurance and shift that to the new per-occurrence wrap, maintain the multi-year protection and acquire the commercial coverage is estimated to be no greater than $204m for 2016.