Florida’s Citizens Property Insurance Corporation experienced a challenging reinsurance renewal overall it seems, resulting in the insurer of last resort buying significantly less coverage than had been planned and paying 20% more, on a gross risk adjusted basis than the prior year.

Florida Citizens had originally been hoping to purchase as much as $1.3 billion of additional risk transfer at the renewal for the 2020 season, around $1 billion for the Coastal Account and $300 million for its Personal Lines Account.

That was in addition to $400 million of multi-year catastrophe bond and reinsurance coverage already in-force since 2018.

Met with challenging reinsurance market conditions, with less capacity available and rates rising rapidly, Florida Citizens has in the end opted for a much smaller renewal this time around.

As we’d documented, the insurer met with such challenges in the catastrophe bond market that it withdrew one of the tranches of its recent issuance.

The CFO of Florida Citizens then explained that pricing in the capital markets led to this withdrawal, as the insurer did not want to lock in pricing at current levels over a multi-year term.

In the end, Florida Citizens did persist with a $110 million catastrophe bond issue for its Personal Lines Account, the first time a cat bond has been included within that section of its reinsurance tower.

Ultimately, at the June 2020 reinsurance renewal, Florida Citizens has secured a $1.02 billion risk transfer placement, made up of $620 million of brand new placement and the $400 million of leftover multi-year coverage from 2018, including from its Everglades Re II cat bond issued that year.

So in the end Florida Citizens purchased some 53% less fresh reinsurance protection than had been planned for this year, while rates rose around 20% for it.

Those multi-year cat bonds have proved their worth, enabling Citizens to buy less cover than it could have been forced to at this year’s higher reinsurance pricing.

Citizens disclosed that, on a risk-adjusted basis, the 2020 risk transfer program cost is some 20% higher than the 2019 program based on the gross rate-on-line (RoL).

Surplus exposed to a 1-in-100 year hurricane event is up considerably, given the smaller reinsurance protection purchased.

Citizens blames “inefficient market conditions and significantly higher pricing” for the fact more of its surplus is now exposed to hurricane risks in 2020.

However, it added, “We expect reinsurance markets to stabilize as economic conditions and financial markets improve by the end of this year, which will allow us to manage the risk transfer program and surplus exposure effectively and efficiently.”

Across the entire program, the total 2020 risk transfer program including FHCF cover provides $2.9 billion of coverage with a RoL of 7.5%, which is up 7% compared to 2019’s risk-adjusted pricing, the insurer said.

So challenging reinsurance market conditions and the demand for higher returns in the cat bond market have left Florida Citizens somewhat more exposed through the 2020 hurricane season.

It will be interesting to see how cat bond market conditions and pricing develop over the coming months, as should return expectations come down somewhat we could see some sponsors like Citizens returning at times of the year that are less typical, if they see an opportunity to lock-in multi-year reinsurance protection at better pricing. 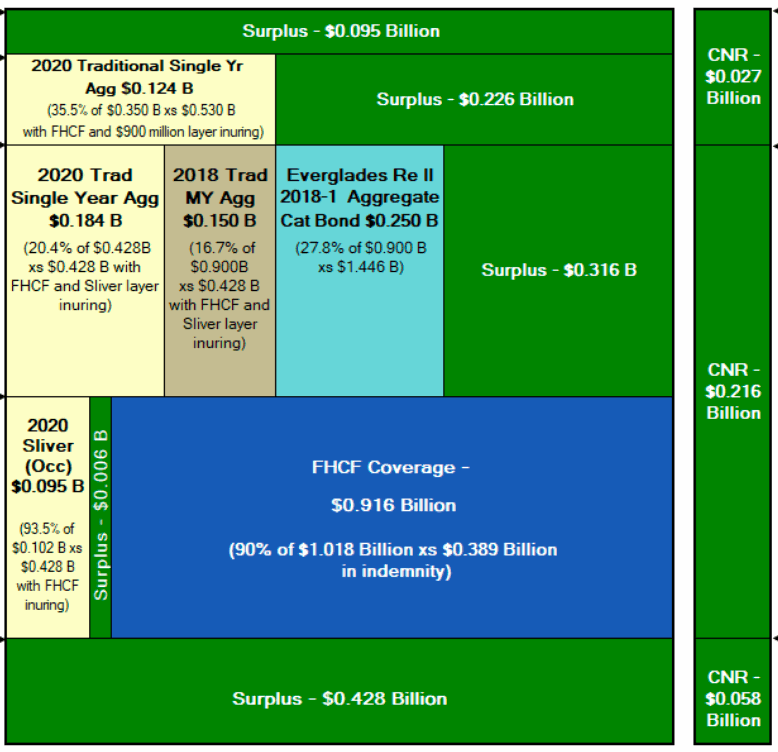 You can see Florida Citizens Personal Lines Account reinsurance tower for 2020 below, which includes the new Everglades Re II 2020-1 catastrophe bond. 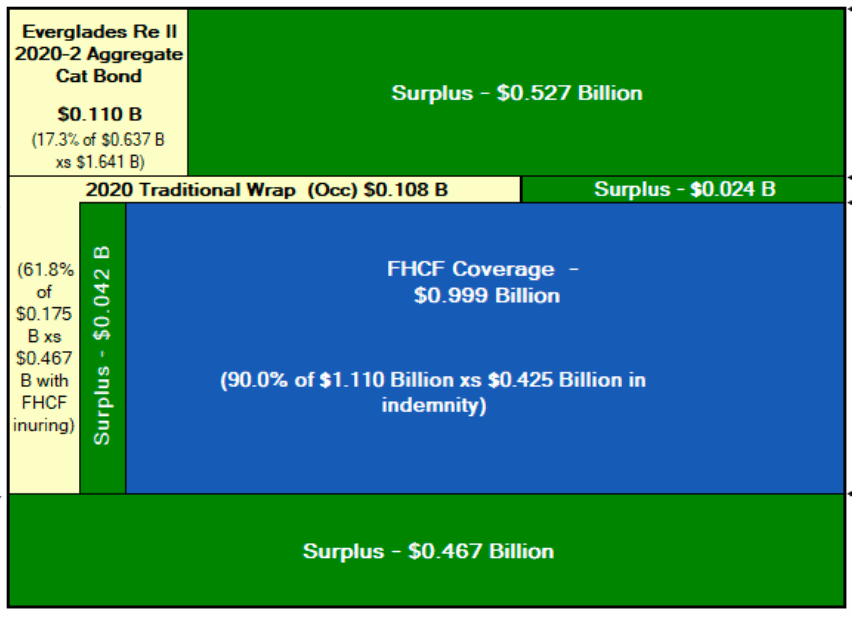