The board of governors of Florida’s Citizens Property Insurance Corporation has approved the purchase of a $1.42 billion reinsurance program for 2018, which is a 7% increase on the total limit of risk transfer secured last year and with more of the coverage from the capital markets via Everglades Re cat bonds.

Florida Citizens will again combine traditional reinsurance with fully-collateralized coverage, including its Everglades Re cat bonds, in its program renewal this year.

The overall program size is slated to be $1.42 billion, a 7% increase from the $1.33 billion program that Citizens put in place a year ago.

The reason for the increased risk transfer in 2018 is likely due to the fact Citizens has dealt with Hurricane Irma losses and loss adjustment expenses amounting to roughly $1.8 billion in the last year, although despite this the insurer says it continues to maintain “substantial surplus” in all its accounts.

So that leaves Florida Citizens needing to secure $940 million of new reinsurance capacity for which the Board has assigned a maximum budget of $92 million that can be spent securing the renewal, including its new cat bond capacity.

The insurer said that its strategy for 2018 is to, “Transfer risk alongside the FHCF, transfer commercial non-residential (CNR) risk, and transfer aggregate annual risk in order to protect a portion of surplus for most catastrophic events and thereby further reducing the amount and likelihood of assessments beyond the 1-100 year event to the citizens of Florida. This in turn also provides for additional claims paying resources in the event that multiple hurricanes strike Florida.”

We now know that $250 million of coverage has been secured through Florida Citizens latest catastrophe bond, Everglades Re II Ltd. (Series 2018-1), which as we explained earlier grew in size and priced at the low-end of guidance.

So that leaves Citizens needing to secure the remaining $690 million from the traditional and collateralized reinsurance markets, with a number of ILS fund managers likely to participate in those layers as well.

In its approach to the reinsurance market in 2018, Citizens said that it achieved, “efficient pricing and continued future opportunities for Citizens to further reduce its exposure.”

In revisiting the capital markets in 2018, Florida Citizens has now secured a total of $3.35 billion of reinsurance through Everglades catastrophe bond issues in just six years.

Florida Citizens said that the cat bonds, “provided an overall reduction in the pricing of reinsurance programs” and also added welcome diversification to its sources of reinsurance coverage.

That has certainly been the case, with the pricing down of its latest catastrophe bond, as we explained earlier today.

The 2018 cat bond provides aggregate reinsurance protection, sitting just above the insurers FHCF coverage and is designed to protect it against the impact of multiple storms during the term of coverage.

Importantly, the 2018 cat bond is callable to allow Citizens the flexibility to cancel the deal after two years, should its exposure change dramatically in that time, likely due to depopulation.

The Citizens Board recommended the proposal to secure the $1.42 billion of reinsurance for 2018 and with the cat bond successfully secured now, the rest of the placement will likely be signed in the coming days or weeks.

You can see the full Florida Citizens coastal account reinsurance program tower for 2018 below. 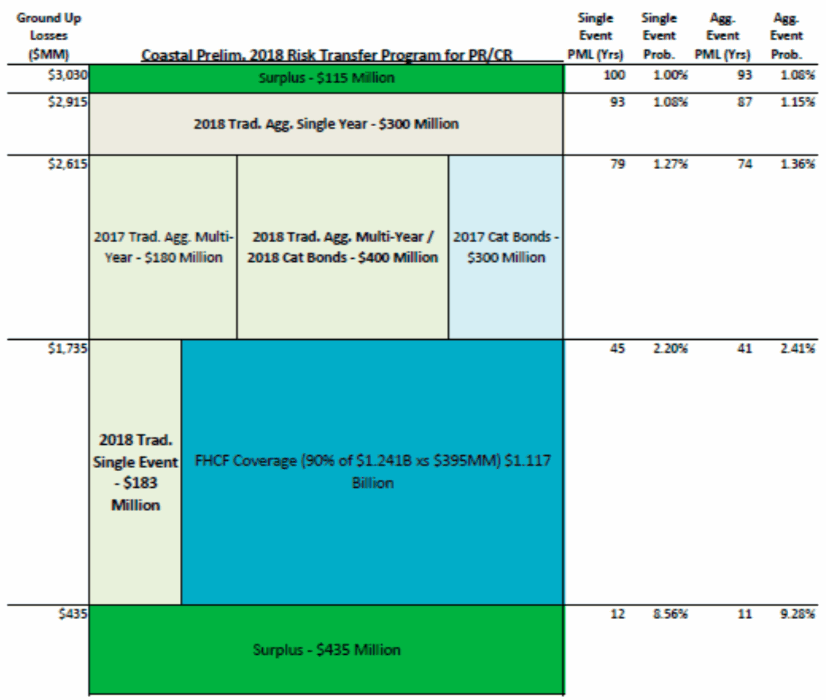 Florida Citizens will be hoping for similarly efficient execution in the traditional reinsurance market, as it found in the capital markets for its latest Everglades Re II cat bond.

Based on the experience of other insurers that have been out in the market early with their 2018 reinsurance renewals, as well as the pricing expectations of the market, Citizens is likely to find its overall renewal terms very attractive this year, particularly considering the occurrence of hurricane Irma last year.