Flooding in Central Europe a threat to reinsurers

Flooding across Central Europe is reaching record levels in many towns and cities after torrential rainfall struck the region in recent days. The waters are still rising in some areas of Austria, Germany and the Czech Republic and it’s possible that a meaningful insurance industry loss from this flood event could also hit reinsurers in the region. June 4th & 10th updates further down this article.

There are emergency operations underway in many towns and cities across the region. One of the most threatened cities is Prague, the capital of the Czech Republic where there are concerns that flood defences built after a catastrophic flooding event in 2002 may not be high enough.

European flooding in the same region in 2002 caused nearly $4 billion of insured losses, with much of that being passed on to the largest European reinsurance firms. This episode, which still has some time to play out and needs the waters to recede before the extent of damages can be understood, has the potential to create losses in the billions for insurers. It must be stressed however, that with rainfall continuing and rivers still rising it is not possible to forecast how high losses may or may not rise.

The meteorological service in Austria said that the region had experienced almost two months of rainfall in just two days, creating conditions where rivers are now swollen to bursting their banks as well as localised flooding from rainfall. Two of Europe’s largest rivers bisect this region, the Danube and the Rhine, causing states of emergency to be declared in towns and cities close to the rivers paths.

More rainfall is expected, according to the German Bavarian flood forecasting service, and it expects the river levels in the Danube will rise further possibly reaching record levels. However flood defences have been much improved in the region since the 2002 flood event.

Stocks of leading European reinsurers have dropped this morning, Munich Re fell 3.9%, Hannover Re 2.9% and Allianz 1.5% according to Bloomberg, while Reuters reported that Swiss Re dropped 2.1% and the STOXX Europe 600 insurance index dropped 1.6% in early trading. That index has bounced back a little now but remains down today.

Europe as a whole is exposed to major flood risks and the potential for losses in the region is extremely high. Many major towns and cities are situated next to large rivers and often the defences are not adequate for the 1-in-100 year type flood events.

Currently there are no outstanding catastrophe bonds with exposure to European flooding. That is something that initiatives such as PERILS AG’s inclusion of UK flood loss data hope to rectify in the future. European flooding is a peak peril that has the potential to cause insured losses of over $10 billion for a really serious event. As risk models and provision of loss data improves and becomes more widespread throughout the region it is surely only a matter of time before a European flood catastrophe bond comes to market.

The provision of industry loss data for flooding in Europe by PERILS will also allow instruments such as industry loss warranties to be transacted and private reinsurance contracts using industry loss triggers. In Central Europe particularly, as insured property values increase the need for better ways to transfer that risk is growing.

This current flood event in Central Europe should serve as a reminder to the reinsurance market that this is a peak peril and one which may become more damaging and prevalent as climate patterns change.

We’ll update you should the flood event become more serious in the coming days and once there is any visibility of potential insured losses from the event.

Here is a situation update on the ongoing flooding event in Central Europe.

Late on Monday the Czech authorities opened a number of dams and barriers further up the River Vltava in the south of the country as water levels were getting so high. This released a significant amount of additional flood water into the river heading downstream towards Prague. Prague has as a result experienced much more flooding however the main defences in the old area of the city appear to have held and reports suggest water levels in Prague are now dropping. Water levels are expected to peak in the north of the Czech Republic later today, Tuesday.

Cities in southern and eastern Germany are under high alert as heavy floodwaters have swollen the River Elbe to record levels. The city of Dresden is preparing for water levels said to be as much as 5 metres higher than normal. A state of emergency has also been raised in Hungary as the Danube will bring significant levels of water through Germany, Austria and on to Hungary by Thursday.

Some towns in Germany such as Passau have reported flood levels higher than anything seen since the 16th Century, which gives an idea of how severe this flood event in Europe has been.

The River Vltava from the Czech republic flows into the River Elbe and water levels in the Elbe are said to be nearing levels seen in 2002. There is more to come for the Elbe region of Germany as the volume of water from the Vltava peaks later today and then joins the Elbe and will threaten towns already flooded in eastern Germany.

The image below from the BBC shows the location and direction of rivers involved in this flood event: 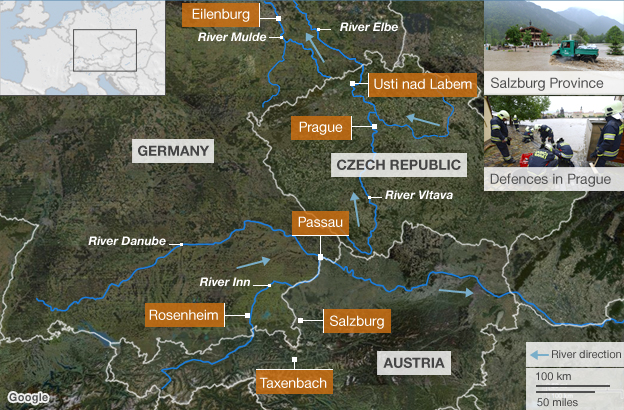 The heavy persistent rains are the result of a low pressure system called a Genoa Low Cyclogenesis, which developed over the eastern Adriatic Sea. From there it moved northwards towards the Eastern Alps bringing with it warm, moist air from the Black Sea. As this warm air mass collided with the colder air masses over northern Europe, it was lifted up and rain clouds developed. The system, named Frederik, remained over Central Europe for several days due to a very stable track but has now moved on towards southeast Europe.

The event has released an enormous amount of precipitation—in some areas as much as 400 liters per square meter within a few days. In Aschau-Stein, the precipitation rate reached 405 liters per square meter within 90 hours. Over the past 24 hours, over 90mm of rain has fallen in areas around Salzburg, Austria. In Germany, 61 river gauges (mostly in Bavaria, Thuringen, and Sachsen) are showing levels above their highest flood warning levels. While the gauges along the Danube in Passau are inoperable, the flood waters have reached 12m, which is above the historical high set in 1954. Several tributaries are rising above the 100-year water level.

It’s still impossible to say how large the economic and insured loss from this European flooding event will be. It will be clearer come Thursday once flood waters have begun to drop a little, although any additional heavy rainfall could exacerbate the situation further. An insurance and reinsurance industry loss in the billions of Euros is to be expected.

The flooding continues in parts of Germany, Poland and also in Hungary, with flood waters yet to recede in some rivers.

Meanwhile, another analyst, William Hawkins of Keefe, Bruyette & Woods also forecast the insured losses at 2 to 3 billion euros, adding that they would be manageable for insurers and reinsurers from both capital and earnings perspectives.

As a result of the two analysts notes shares in European insurers and reinsurers rebounded a little on Friday.

However, it’s still very early to forecast the real extent of the losses from this event and there is every chance that when fully calculated across all countries involved that the insured loss could creep nearer to 2002’s total.

Interestingly, Reuters reports that the German insurance industry association GDV has said on Monday 10th June that it expects the insured losses in Germany from flooding will be worse than those suffered in 2002. In 2002 the insurance industry loss in Germany was 1.8 billion euros, or $2.4 billion, however it says that it expects damage claims from the 2013 floods will be higher.