First-half re/insurance disaster losses below average at $20bn: Swiss Re

Losses from natural catastrophes and man-made disaster events are estimated to have cost the insurance and reinsurance industry $20 billion in the first-half of 2018, well down on the $35 billion average, according to global reinsurer Swiss Re.

Economic losses from major natural catastrophe and man-made loss events came out at $36 billion for the first-half of the year, which is 44% down on the prior years $64 billion and significantly below the long-term average of $125 billion.

On the insured side, last year saw $30 billion of first-half disaster losses for the insurance and reinsurance industry to deal with. 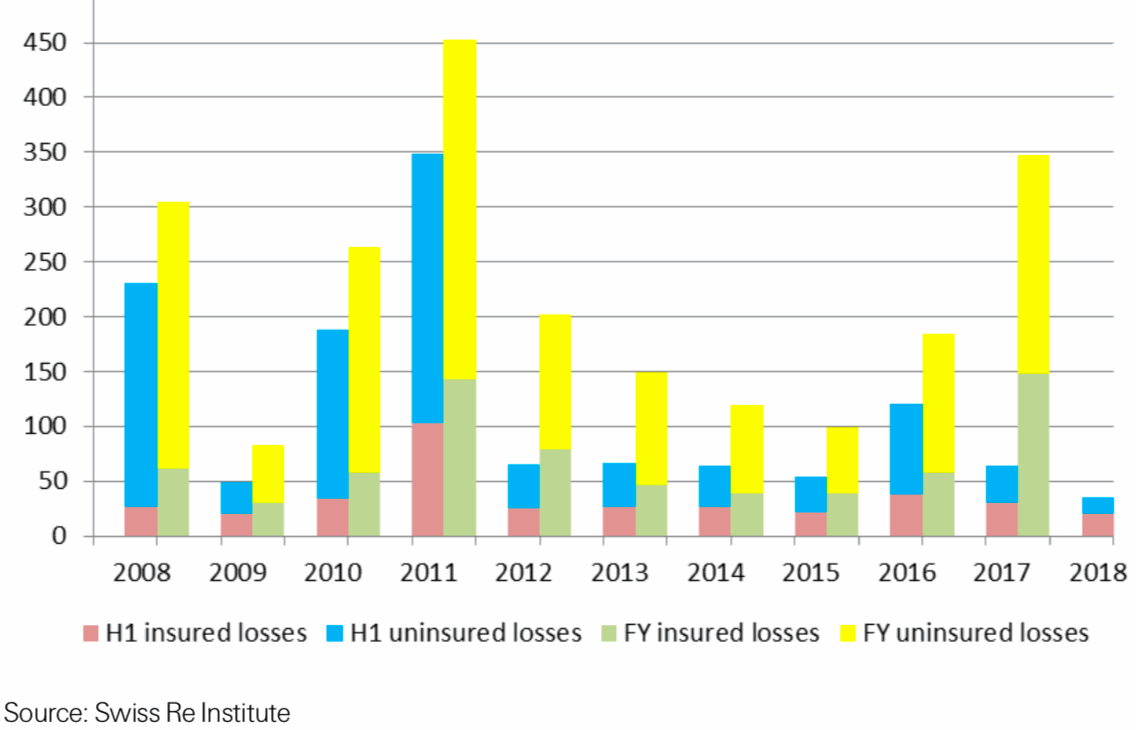 Swiss Re’s figures come in between other estimates already released.

Commenting on the disaster activity in the first-half, Swiss Re said, “A series of winter storms in Europe and in the US caused the largest losses in the first half of 2018. Globally, around 3 900 people lost their lives or went missing in disaster events during the first six months of 2018, compared to approximately 4 600 for the same period in 2017.”

It was a relatively high percentage of economic losses that were insured in this half-year, as almost 56% fell to insurance and reinsurance given most major catastrophe events occurred in areas with high insurance penetration.

Winter storm Friederike in Europe was the costliest event of the period, and Swiss Re Institute’s sigma estimates the total economic losses from this European windstorm at $2.7 billion, with roughly $2.1 billion insured.

Other major events included a March Nor’easter storm which was the largest loss for the insurance industry in the U.S., with claims of $1.6 billion and a four-day spring storm affecting south-eastern states of the U.S. with tornadoes and large hail, giving insured losses of $1.1 billion.

Looking ahead, Swiss Re notes that recent droughts and heatwaves could mean higher losses to come for insurance and reinsurance interests, through the rest of 2018. Additionally, the reinsurer believes these could point to a new normal of hotter and drier periods.

Martin Bertogg, Head of Catastrophe Perils at Swiss Re, explained, “We expect to see more extreme weather conditions such as intense heatwaves and dry spells of the like we’ve seen over the last few weeks. This may well become the new normal. According to scientific climate models, temperature, and atmospheric humidity will increase in many parts of the world, and at the same time also become more volatile.

“We will experience more variable rain patterns and severe droughts and in consequence raging wildfires. Accelerating urbanisation and the ongoing expansion of dwellings in natural forest areas will considerably exacerbate this loss potential. Society will need to adapt and prepare for these increasing occurrences.”