The Florida Hurricane Catastrophe Fund (FHCF) has completed a $1 billion renewal of its private reinsurance cover, the second year the fund has looked to private sources of traditional and third-party risk capital to offload the risk of severe a hurricane season.

Again, the insurance-linked securities, reinsurance linked investments and collateralised market has taken a significant share, with at least $135m directly backed by ILS capital, while additional could find its way into vehicles backed by third-party capital.

However, the ILS and collateralised reinsurance market has pulled-back slightly on its backing for the FHCF’s reinsurance program in 2016, as insurance-linked investment manager Nephila Capital more than halved its line size at the renewal.

The $1 billion renewal of its reinsurance risk transfer in 2016 puts the FHCF into what it terms “the best financial position ever with its statutory maximum limit of $17 billion fully liquid and available to pay claims.”

This liquidity, or pre- and post-hurricane catastrophe capital comes in the form of $13.7 billion in cash, $1 billion of private market reinsurance risk transfer capital, as well as $2.7 billion of pre-event bonding.

Of course, the repeated benign hurricane seasons have left the Florida Hurricane Cat Fund flush with cash to pay for the next major storm to hit Florida, but should that happen the reinsurance layer of protection could prove vital to help the FHCF pay its obligations to insurers operating in the state.

The FHCF said that the “softened state” of the global reinsurance and risk transfer market provided “favorable pricing and desirable terms and conditions” meaning that the State Board of Administration could, on behalf of the FHCF, “take advantage of an opportunity to optimize its capital structure for the current contract year and also to accumulate or preserve capital for subsequent contract year.”

The FHCF notes that importantly the reinsurance renewal also diversifies its source of capital globally, transferring the Florida hurricane risk out of Florida, while at the same time reducing its reliance on debt capital markets and lowering the chances of assessments on Florida tax payers being required after a catastrophic storm.

The FHCF said that the reception of the risk transfer market was good and the program well received by both traditional and collateralized reinsurance markets. 29 reinsurers participated in 2016 (down slightly from 30 in 2015) with two being fully-collateralized ILS markets (AlphaCat Managers and LGT ILS Partners Ltd.).

So, in terms of capital markets or third-party reinsurance capital backed participation, the largest share was taken by LGT ILS Partners through its Collateralised Re Ltd. reinsurer, which took a 7.5% line worth $75m. This is the same line size as LGT took at the June 2015 FHCF renewal.

Next from the ILS world was Validus’ ILS management unit AlphaCat Managers, which took a 4% or $40m line on the FHCF reinsurance renewal. This is a slightly larger line size from AlphaCat, up from 3.1% of the program, or $31m in 2015.

Nephila Capital meanwhile reduced its line size by more than half, taking 2% or $20m of the program through its Lloyd’s of London syndicate 2357. This is down from 5% or $50m that Nephila took in 2015 and aligned with suggestions that Nephila has pulled-back on underwriting Florida risks at the renewal, a possible consequence of the ILS manager sourcing risks more directly (such as the recent Florida Citizens takeouts).

Other participants in the $1 billion FHCF reinsurance renewal that likely feature an element of third-party capital backing are an 8.75% or $87.5m line taken by Bermudian reinsurer RenaissanceRe’s largely third-party capitalised vehicle DaVinci Re, the same size line as its 2015 participation in the program.

Other notable traditional lines taken involved Arch Re with 6% or $60m and Canopius through Lloyd’s syndicate 4444 with 3.5% or $35m. Otherwise the ILS and collateralised markets were next, along with third-party capital backed DaVinci Re.

The reinsurance coverage for 2016 cost the FHCF a premium of $63.5m, which seems aligned with its earlier testing of the markets appetite, with the net cost to the insurers included in the FHCF’s premium formula $33m.

The State Board of Administration said that it was “pleased with the response of the reinsurance market and the successful placement was the result of the efforts of its staff, and the work of the FHCF and its reinsurance intermediary, Aon Benfield.”

A full listing of the all the markets participating in the FHCF’s 2016 reinsurance renewal can be seen below: 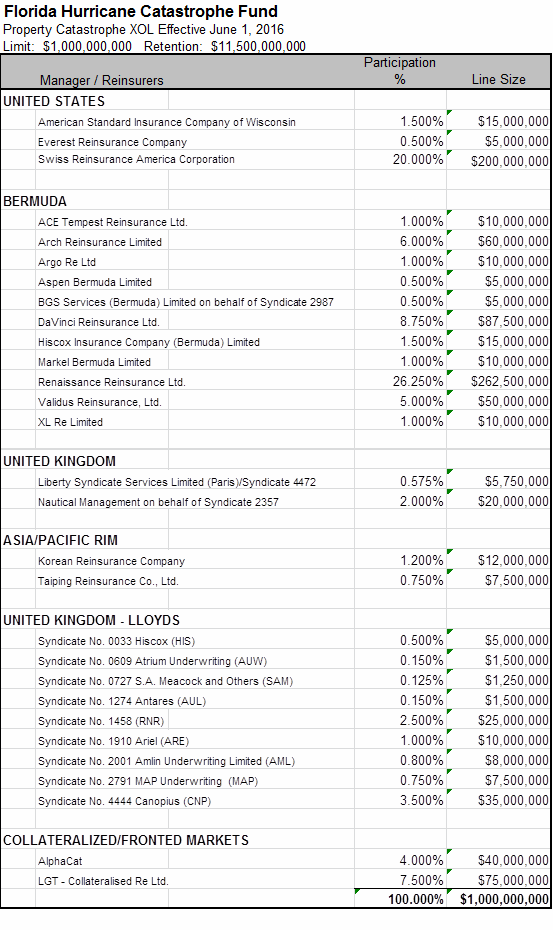