Bermudian reinsurance firm Everest Re has achieved significant growth of its underwriting book during the second-quarter of the year, while at the same time the firm’s collateralized sidecar like vehicle Mt. Logan Re has now reached $1.134 billion, its largest size ever.

Everest Re has grown its underwriting book by an impressive 29%, as gross written premiums for Q2 2018 reached $2.1 billion.

Reinsurance drove most of the increase, with global reinsurance premiums underwritten in Q2 rising by 38% to $1.4 billion, which the company said was driven by higher casualty and property pro-rata premium, rate improvements, increased shares on existing business and also some profitable new opportunities.

In primary insurance the growth was slower, at 13% to $645.9 million of premiums, but this does continue a steady growth rate experienced in previous quarters.

The growth in premiums puts Everest Re on track to write its largest ever full year book of business, with over $4 billion underwritten already this year which should see the firm overtake the $7.2 billion it underwrote in 2017.

Everest Re’s collateralized reinsurance vehicle Mt. Logan Re has likely taken advantage of the greater access to reinsurance business from the much enlarged book in Q2 as well.

Mt. Logan Re Ltd., the collateralized reinsurance, sidecar-like investment vehicle operated by Everest Re, started 2018 with $1.028 billion of assets in time for the key renewals in January.

This is the largest that the Mt. Logan Re vehicle has ever been and it’s likely the collateralized underwriting operations at Mt. Logan were able to take advantage of the growth in reinsurance premiums at Everest Re to put more investor capital to work.

Everest Re uses Mt. Logan Re’s collateralized capacity alongside its catastrophe bonds and own capacity to create a much larger underwriting operation. This scale and use of third-party capital is certainly helping to drive premium growth, which in turn should drive higher profits in time, dependent on loss experience.

Loss experience is the one area where questions will be asked today, as Everest Re had pre-announced its catastrophe loss adjustments from the 2017 hurricanes and other events in one manner, but has reported them in its results in a way that makes them look much larger.

Everest Re said recently that it expected to experience reserve charges of $250 million from prior year loss events and another $25 million of losses from current year events.

But this had been reported after tax and the latest results statement reports catastrophe losses, after reinsurance and reinstatement premiums, of $464.8 million for Q2, a much higher figure.

$399.8 million of this is primarily related to the 2017 hurricanes, while $65 million is current year catastrophe losses, from events including Cyclone Mekunu in Oman and Yemen and late winter storms in the United States.

These much higher figures have surprised some of the investment analysts, but remain largely in line with the expected totals once tax is taken into account it appears.

The growth in third-party reinsurance capital is helping Everest Re to grow its global footprint, while leveraging capital that provides retrocessional protection and efficient underwriting capacity as well and the growth witnessed this quarter is clearly the reinsurer continuing to maximise its opportunities thanks to rates being a little higher following the hurricanes of last year. 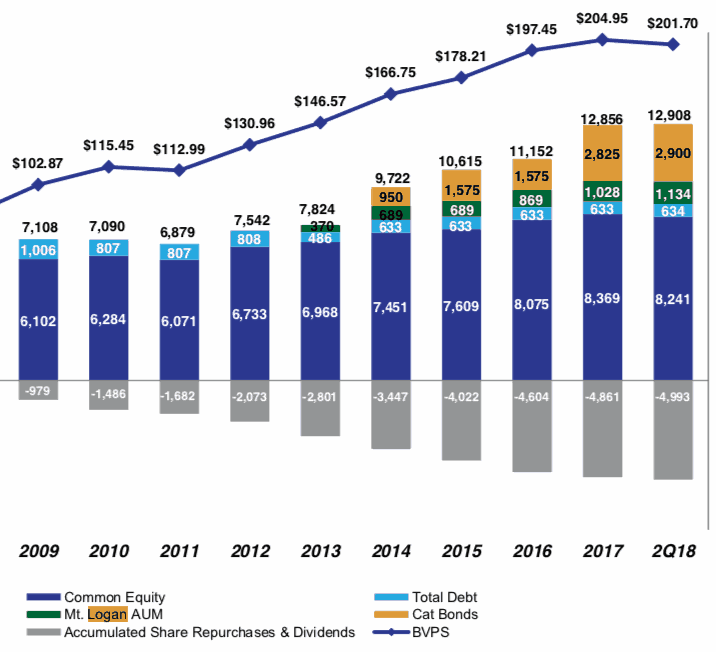