Everest Re is aiming to expand its access to third-party and alternative sources of reinsurance capital, with growth of its Mt. Logan Re sidecar-like structure seen as a key strategic opportunity, according to its CEO.

Third-party capital is seen as one of global re/insurer Everest Re’s three reinsurance strategy drivers, the company will explain today during its first ever investor day.

Of course, Everest Re is already a significant users of alternative capital, insurance-linked securities (ILS) solutions and third-party capital partnerships.

But at the investor day the company will describe its appetite to make increasing use of third-party and ILS capital sources to help it grow its business.

Growing alternative capital is one of Everest Re’s three main strategic targets for its reinsurance business.

Key among this and the location where this growth is forecast to be most significant, is the Mt. Logan Re Ltd. collateralized reinsurance sidecar-like vehicle.

But on top of that, Everest Re also expects to continue bringing efficient capital into its business through the Kilimanjaro Re catastrophe bond program, as well as its use of other ILS instruments such as industry loss warranties (ILW’s).

In laying out the next evolution of its growth strategy, CEO of Everest Re Juan Andrade explained key competitive advantages that the company aims to make increasing use of, one of which is its “robust, scalable third-party capital capabilities.”

“We will continue to effectively partner with capital market investors, both through our Mt. Logan structure and our Kilimanjaro Re program of cat bonds,” Andrade explained today.

He further explained that the company considers ILS as a core part of its dynamic capital allocation strategy.

These activities mean that Everest Re has multiple forms of underwriting capacity available to it, both its own balance-sheet capital, but also capacity delivered by capital market investors and the insurance-linked securities (ILS) market.

As a result, Everest Re aims to use capital that is most relevant for the underlying risk, the firms executives explained today at the event.

One of the targets for the Everest Re underwriting capital strategy is strategic growth of Mt. Logan Re, which the company today described as its “third-party investor risk securitization vehicle.”

In fact, that appears to be the area of Everest Re’s ILS and third-party capital activities where the most significant expansion is targeted.

Mt. Logan Re currently has approximately $903 million of collateralized reinsurance assets under management, but a slide shared at the investor day event today shows that Everest Re has significant growth plans for Mt. Logan Re (see below). 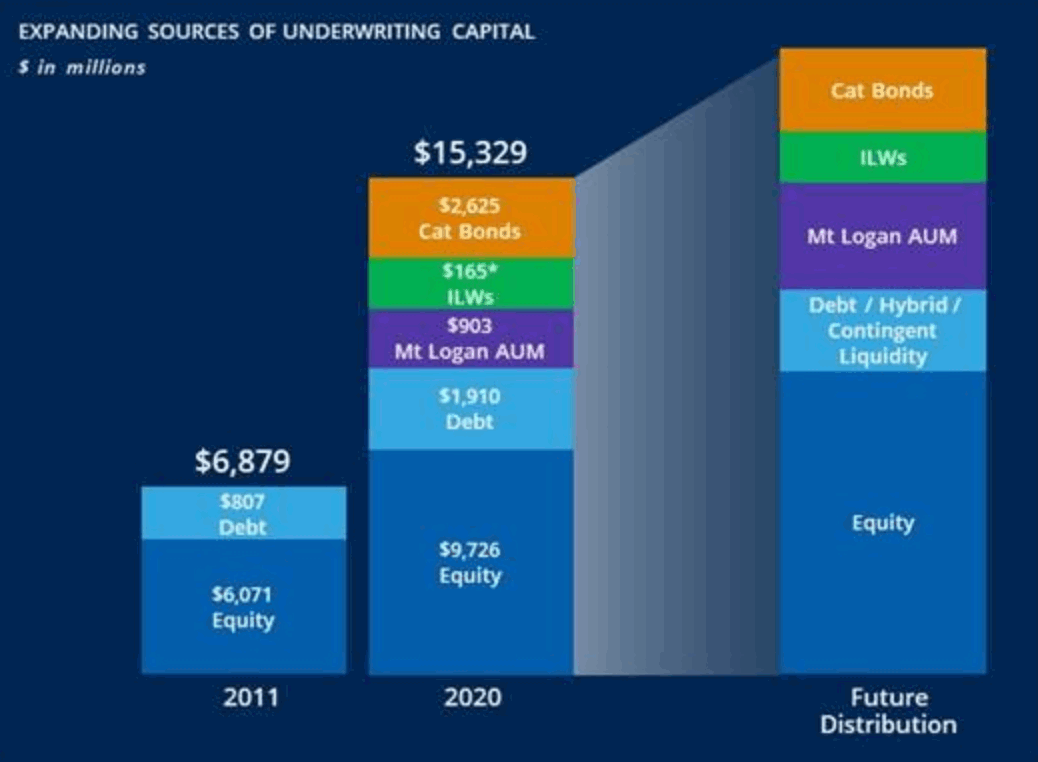 It’s clear from the image above that growth of Mt. Logan Re appears to be the main target for Everest Re.

Discussing third-party capital growth, CEO Andrade explained, “We’re expanding our risk financing through ILS capital, with our Kilimanjaro Re cat bond program one of the biggest in the industry.”

He also said that Everest Re has an, “Excellent ILS capital management platform in Mt. Logan Re and we will look to significantly grow the capital under management there.

“We are expanding our use of ILS investor capital, particularly in our Mt. Logan Re vehicle.”

The chart above also shows Everest Re’s significant catastrophe bond program, which continues to position the firm near the top of our sponsors leaderboard.

Use of the catastrophe bond program has become core to Everest Re and the company clearly intends to continue with this, saying utilisation of cat bonds and the Kilimanjaro Re program will continue.

In addition and for the first time, Everest Re has also broken out its industry loss warranty (ILW) supplied capital, which it counted as $165 million of added capacity through the 2020 US wind season.

This is another lever, of retrocession and added capacity from third-party sources, all of which helps to protect the company and expand Everest Re’s ability to meet its accretive growth targets.

Later in the investor day, Everest Re executives will explain that Mt. Logan Re provides a source of efficient capacity to support its global underwriting franchise, while enhancing client relationships and also improving terms for the company as well. 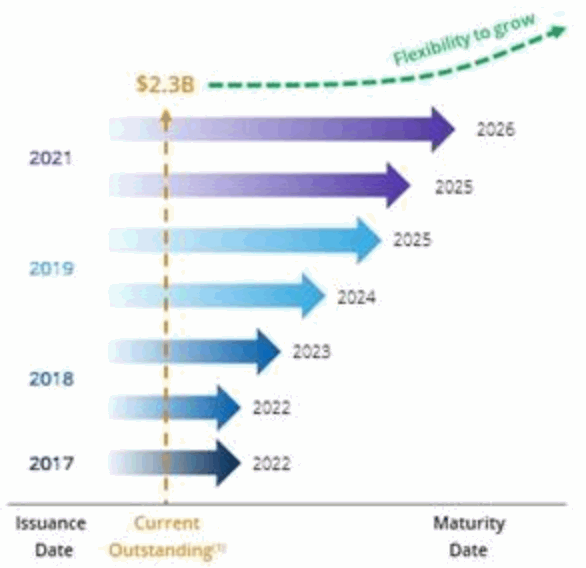 On the catastrophe bond side, Everest Re intends to pursue a “laddered” approach to steady issuance over the coming years, leveraging the appetite of capital market investors to help it grow capacity further.

In fact, a slide shared at the investor day event shows the company feels it has the flexibility to grow the cat bond program at a rate to suit its needs, suggesting Everest Re has a long-term strategy to continue tapping the catastrophe bond market.

Mark Kociancic, CFO of Everest Re, said that the company intends to continue optimising its balance-sheet capital, using traditional sources and alternative including ILS.

He also described the cat bond program as a, “core piece or our risk management strategy.”

Overall, the Everest Re CEO and his senior executives are particularly bullish on growth of third-party capital usage at the company, as it expands into the harder market environment.

The Mt. Logan Re vehicle appears to have a renewed focus at the highest levels in the company, which will provide positive opportunities for investors to access returns from Everest Re and partner with the company.