European property renewals harden, with some 50%+ rate increases: Gallagher Re

Some European property catastrophe reinsurance programs saw significant rate increases at the January 2022 renewals, as negotiations reverted back to the more traditional subjects of price and risk appetite, according to Gallagher Re.

The reinsurance broker reported that, after the most significant European catastrophe losses seen in many years, the flooding and severe storm activity in the summer, renewals in the region saw rate increases that were more pronounced than anticipated in many cases.

Because of the record-levels of capitalisation seen across the reinsurance industry as the renewals approached, it seemed European catastrophe rates would not rise too significantly, given the appetites of large traditional carriers and the Big Four to hold onto market share and perhaps grow it further.

But, it seems the appetite to be paid rates that are at least more risk commensurate has outweighed the desire to dominate, enabling steeper rate increases than had been anticipated, or hoped for by many.

“It is difficult to define a single factor that led to the market hardening and global macroeconomics certainly played its part. However, it is difficult not to focus on reinsurers ’ anticipation of another above-average cat loss year – and its associated earnings squeeze – fuelled by cat events of global scale like Winter Storm Uri, Hurricane Ida and record levels of European cat losses caused by the devastating flood event Bernd (>EUR 12bn) and several severe convective disturbance,” Gallagher Re explained in its January 1 2022 renewals report.

Underlining just how historic some of the price changes have been in European reinsurance programs this year, Gallagher Re went on to explain that the renewals there were almost unprecedented.

“These collectively influenced reinsurers’ cat risk appetite and created a focus on underwriting discipline and pricing corrections not seen in Europe for the non-retro cat segment for the majority of this century,” the broker said.

These significant rate changes were restricted to the regions badly affected by this summer’s storms and floods though, meaning that for Germany, Switzerland, Austria and Belgium it was a “tougher renewal market than anticipated,” according to Gallagher Re.

Loss free territories did not completely get away without rate increases though, as Gallagher Re reports risk adjusted flat to +5% increases for the UK, Nordic region and France.

Regions away from the floods did not get away without challenges though.

Gallagher Re said that, “For other large cat markets (particularly France) the overall market conditions led to a significant drop in reinsurance capacity where some programmes just got completed. Italian programmes being impacted by frequency losses unrelated to Bernd resulting in rate adjustments of low to mid-teens percentages and similar to France a significant drop in reinsurance capacity.”

The broker cites the European renewals as “very late” with many reinsurers tactically playing for time, resulting in a “stalemate with intent.”

There was a significant disparity in reinsurer quotes, reflecting different approaches to the market by catastrophe specialists and the more generalist, or larger reinsurers.

Interestingly, reinsurer risk appetite for secondary peril exposure dropped significantly, with some reinsurers shifting away from cat risks, others struggling to manage outsized losses from the floods and storms.

Retro capacity was reduced, which also affected the European marketplace and demand increased for cat capacity in some regions, which will have pressured availability as well.

“The reduction in risk appetite manifested in a shift “out of the money” away from aggregate structures as well as significant changes to top layer pricing with rates increasing by over 50% for focal areas,” Gallagher Re explained.

A better picture of the European property reinsurance rate environment at 1/1 can be seen in the chart from Gallagher Re below: 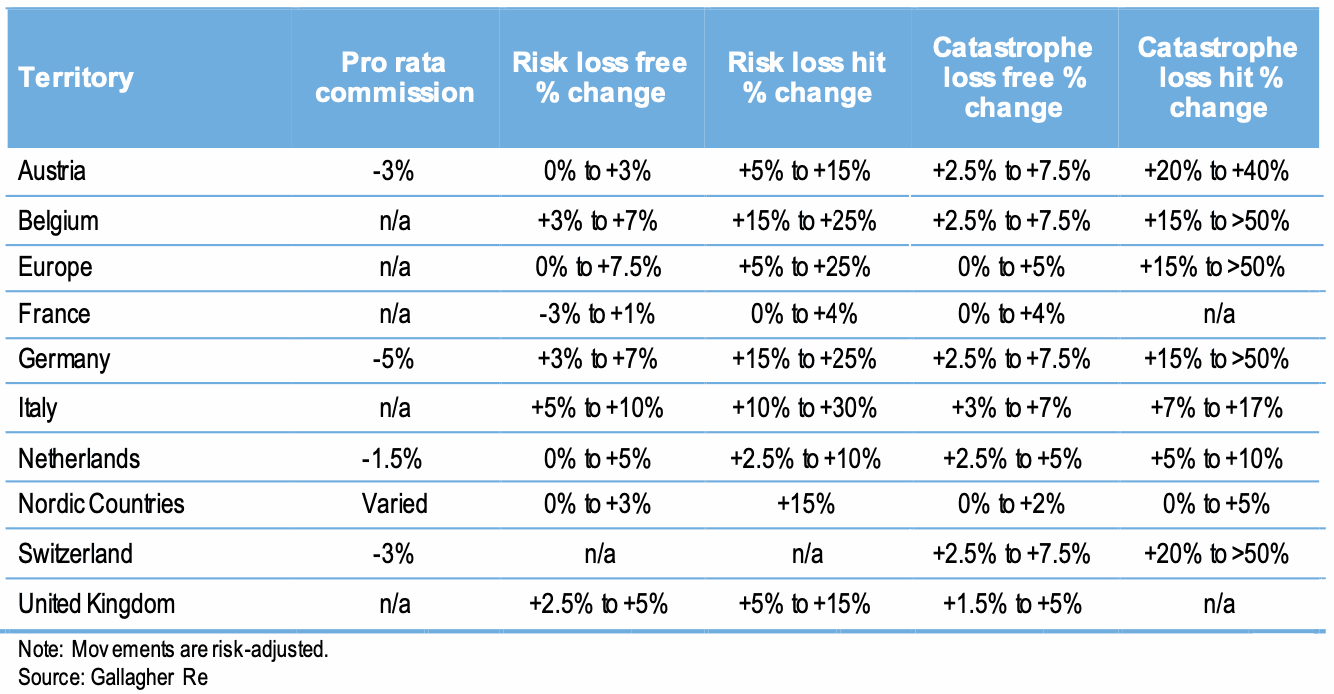 Not everyone was impacted though and it seems long-term and stable buyers of reinsurance may have fared better in some cases.

“For specific clients, the sustainability of their cat structure eclipsed the pricing debate. However, whilst some restructuring of programmes was executed, larger loss impacted clients were in the main unwilling to give up hard won coverages and tried and succeeded to renew their programmes without meaningful increases in retention,” Gallagher Re continued.

Some new capacity emerged from the more recent reinsurance start-ups and we’ve spoken with some ILS fund managers that felt satisfied enough with the rate increases in Europe to deploy a little more capital there.

In recent years, the ILS market has downsized its stake in European property reinsurance programs, as many ILS fund managers have felt rates were depressed to a degree that they did not cover the risks being assumed.

The January 2022 renewals have helped to balance this out more, making European renewal business more attractive to the ILS market again, it seems, although we still hear from other ILS funds that believe there is more rate required across the region.

The European property reinsurance renewal outcome provides a clear sign of hope for underwriters and reflect the changing risk appetite of the industry, as well as its awareness of the challenges posed by secondary perils and also climate change.

The key, for the industry, will be in sustaining higher levels of pricing, as European property rates had really slumped to levels that were too low for most catastrophe specialists and led to the globally diversified larger reinsurers dominating the sector.

It’s far healthier for the risk to be more broadly spread through the marketplace and it will be interesting to see how the European reinsurance market develops through 2022 and into next year’s renewal season.