Fitch Ratings has said in an update that it expects the recent European flooding, which hit Central Europe particularly hard, may cause insured losses of €3 billion in Germany alone. In the update published yesterday 11th June, Fitch said it expects the floods in Europe this year will be even more costly than the 2002 European flood event.

Update: Risk modeller AIR has estimated that insured losses in Germany could hit as much as EUR5.8 billion.

Fitch said in its release yesterday that if the flooding progressed as it has in the past, the economic loss bill in Germany would be around €12bn, and insured losses would likely range from €2.5bn to €3bn. These figures would outstrip the 2002 flood event for losses within Germany, however Fitch said that the impact on insurers would be minimal and the insurance sector is likely to remain in underwriting profitability.

Fitch says that it expects that the majority of claims resulting from the floods are likely to be on homeowners’, contents and motor insurance policies, as well as business interruption insurance, and insurers who have high market shares in homeowners’ and motor lines are expected to be hardest hit. Fitch cites public sector insurers in western Germany, such as Versicherungskammer Bayern and the Sparkassen Versicherungen, and Allianz in the east of the country as among those expected to be hardest hit.

Fitch estimates that approximately 32% of all residential insurance policies in Germany include natural hazard cover, but notes that there are large regional differences. Of areas currently affected by the floods, Bavaria has the lowest level of natural hazard cover (21% of policies), where as in Saxony the level is 42%. Coverage may be even lower in locations that are particularly susceptible to flooding as the cost of flood cover may be prohibitively high.

Fitch expects flood claims will be approximately 5% to 6% of the annual sector claims total. It says that this would on average, add between 3.5 and 5 percentage points to an insurer’s gross combined ratio. Reinsurance will cushion the impact, says Fitch, with typical excess-of-loss reinsurance cover reducing the impact on the net combined ratio to between 2 and 3 percentage points.

So Fitch is expecting the current European flooding event to become the largest flood insured loss in European history. This estimate from Fitch is just for flood insured losses within Germany and if you add in the losses expected in Austria, Czech Republic, Hungary and now Poland as well, the whole event could see a much larger insured loss than was experienced back in 2002.

We also wrote yesterday that Reuters had reported that the German insurance industry association GDV said that it expected the insured losses in Germany from flooding to be worse than those suffered in 2002. Fitch’s estimate would seem to confirm that fear.

We also covered other analyst estimates in an update to our article: Flooding in Central Europe a threat to reinsurers.

Exposure to ILS funds is expected to be minimal. There are no current flood catastrophe bonds in circulation however some ILS funds do have exposure to flooding in Europe through reinsurance contracts they have collateralized. It is still too early to tell whether any ILS or collateralized reinsurance fund will face any impact from these flood events in Europe.

On Tuesday 11th June PERILS AG released some updated flood footprint satellite images, including the one below from Dresden which shows just how bad this catastrophic flooding event has been for some major German cities. 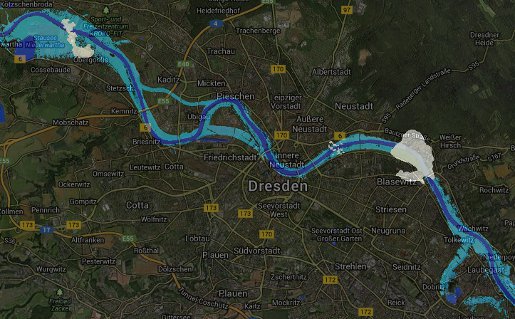