The winter weather affecting northern Europe continues, with two more named European windstorms striking the UK in the last few days. Each time fresh storms and low pressure cross the Atlantic and slam into northern Europe and the UK, the rainfall brought with the storms is exacerbating an already severe level of flooding.

The UK is in the grip of some of the most extensive flooding seen in many years, with parts of the southwest having been under water for over a month and flooding now affected areas closer to London where property density and overall values at risk are significantly higher.

Tini is the 14th severe European windstorm of the current winter season. According to reinsurance broker Aon Benfield’s Impact Forecasting unit, an overall economic loss of at least $1 billion (EUR730m) is anticipated from windstorm Tini, adding to losses already suffered during the storm season. 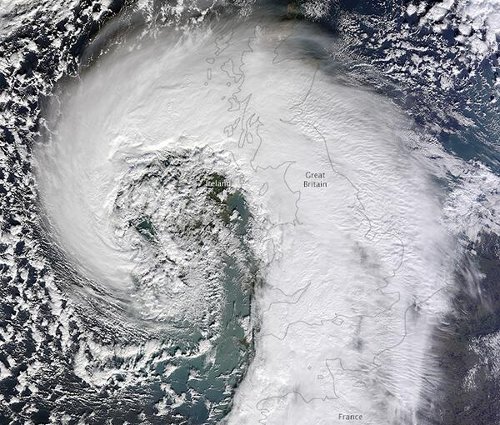 European windstorm Ulla followed closely on Tini’s heels, impacting the same regions, of Ireland, the UK, some of coastal northern France and moving on towards Scandinavia, on Friday. Storm Ulla coincided with high tides on the UK coast and has caused some of the worst coastal inundations seen in some areas this winter.

Ulla brought winds with gusts of at least 80mph to areas of Ireland, Wales and England, as well as additional heavy rainfall, with some areas receiving 40mm or more of rain.

Now the 15th severe European windstorm of the season, at the moment it looks as if windstorm Ulla could be almost as severe as Tini, although the impacts are different and wind speeds were higher with Tini while coastal flood and surge may have been worse with Ulla. So Ulla could contribute another economic loss approaching $1 billion.

The UK floods are now some of the worst on record in parts of the country. Impact Forecasting said that since December 2013, at least 5,800 homes have been flooded in England. Of that total, 1,135 have been flooded in the Thames Valley area alone since January 29th 2014.

Rainfall levels in January were the highest since 1766, according to the UK Met Office, and February is so far trending well above the average rainfall amount expected.

UK rainfall levels in December and January, leading to flooding

A number of severe flood warnings remain in place and there is expected to be more damage in areas around the Thames and Severn rivers over the next couple of days. Groundwater levels in some parts of the UK are now extremely high, meaning that further flooding can be expected with any additional rainfall.

The flooding situation has been evolving rapidly, meaning that early estimates last week before the latest storms and rainfall are likely to be significantly under the final damage total. Some of the first estimates were for an economic loss of £1 billion and insured loss of £500m, but that is likely to be exceeded by some way.

The cost to the UK economy had been estimated at as much as £14 billion, from damage, lost business and general economic slowdown due to the severe flood events. In terms of economic damages, estimates now range from £1 billion to as much as £5 billion.

Some of the latest estimates for the insured losses from the UK floods are for over £1 billion, with some suggesting that the final tally could approach flooding losses last seen in 2007 of £3 billion.

An analyst from Barclays said that a £1 billion flood insured loss would result in as much as a 12% post-tax profit hit at insurer RSA, 9% at Aviva and as much as 11% at Hiscox, according to this FT article.

It is impossible to accurately forecast the losses from the UK floods with the situation ongoing and developing all the time. Further rainfall is forecast for the coming week which could increase the threat of additional flooding and cause further damages. Then in terms of an insurance industry loss France, where severe flooding has been experienced in Brittany, and Ireland need to be considered as well.

We can begin to make some educated guesses about the extent of insurance industry losses from this winters storms and floods, however, by looking at what has been reported elsewhere as well as estimates from PERILS AG.

So far this winter PERILS AG has investigated 13 European windstorm events. We would expect both Tini and Ulla will deserve investigation, taking that number to 15. PERILS AG only reports on events which cause an insurance industry impact of over EUR 200m. So far three storms have qualified for reporting, while six have been deemed unlikely to result in that level of insured losses.

It’s reasonably safe to make an assumption that the six storms that PERILS deemed not qualifying, so unlikely to reach EUR200m, may have caused another €300m between them (€50m each), so taking our unscientific estimate of insured losses to €2.323 billion.

Then we have another four European windstorms under investigation, including Ruth which is likely to qualify as it caused quite an impact on the UK. So maybe those four will result in another €350m of insured losses, taking the minimum qualification amount of €200m for Ruth and €50m for the other three storms. That takes our estimate of total insured losses to €2.673 billion.

We still have two more storms to consider, windstorms Tini and Ulla. From the damage suffered from these storms it is hard to imagine that they will not result in insured losses of €200m each, thus qualifying for reporting by PERILS. So that’s another €400m at least to add to the tally, which takes our total from the European windstorms to €3.073 billion.

But we haven’t taken the UK flooding into account in any of those estimates, so that is assumed to be at last another £1 billion or approximately €1.22 billion. Add that to our total insured loss estimate and it rises to €4.273 billion.

Add in some additional insured losses for flooding in Brittany and northern France, plus flooding in Ireland and we could easily be at a total insurance industry impact from this winters European windstorms and floods in the range of €4.5 billion to €5 billion.

Should the UK flooding continue to worsen and the impacts get as severe as last seen in 2007 and we could add another £1 billion to £2 billion to that figure.

At that point these losses are really becoming meaningful for home insurers in the UK and other affected countries, with some of the loss expected to be passed on to global reinsurers as well.

It’s not just Europe where losses are rising

So while the European windstorms and flooding affecting northern Europe is beginning to look like a sizeable loss for the insurance and reinsurance industry, looking across the Atlantic at the U.S. winter storm situation shows that further losses will impact the industry there as well.

The combined impacts of severe winter weather to the industry could be some of the worst ever suffered. While these aren’t on the scale of losses suffered from catastrophe events such as severe hurricanes or earthquakes, they are sufficient to result in some relieving of pressure in some loss affected regions and lines of business, but perhaps more on insurance than reinsurance rates.

Catastrophe bonds continue to look unaffected, but the amount of losses to be passed on to global reinsurers must be growing all the time and there is a strong likelihood that some impact to capital markets backed reinsurance players, such as ILS funds, could be expected if the situation continues.

It will be some time before the insured loss totals are known for the latest storms (both European and U.S. winter storms) and the developing flooding situation. We can expect to see an increasing amount of discussion and speculation of the eventual totals so we hope that our unscientific approach above gives you some idea of the potential impact this winters events may have.

Other recent articles on the winter weather:

– U.S. winter storms to cause over $1.6 billion insured loss