Drought will become one of the most destructive natural catastrophes: Munich Re

Globally the risks posed by and impacts created by droughts and heatwaves have been growing in recent years, yet drought itself remains a widely underestimated natural hazard, according to a recent report published by the worlds largest reinsurer Munich Re. According to Munich Re’s report, there have been around ten loss-producing droughts around the world every year in the early eighties, but in recent years this number has almost doubled.

The insight comes from Munich Re’s new Topics Geo 2012 report, which looks at the natural catastrophes which affected the globe in 2012, discusses the losses caused both in terms of economic and insured losses, and contains features on a number of specific events one of which being drought.

“The Intergovernmental Panel on Climate Change (IPCC) expects heatwaves and droughts to increase in many regions of the world over the coming decades, in the course of which droughts will become one of the most destructive natural catastrophes”, commented Prof. Peter Höppe, Head of Geo Risks Research at Munich Re.

Just last year in 2012 the U.S. mid-west saw a destructive drought which caused a signficant insured loss in the crop sector. Munich Re’s report says that this was around a 1 in 40 year drought event, triggered by record temperatures following a dry winter. Munich Re puts agricultural losses from the drought in 2012 at around $20 billion with as much as $15 billion insured.

“The US agricultural insurance system is based on dividing the risks between the state and the insurance industry and in this case proved its worth. It will enable farmers to return to productivity quickly and avert bankruptcies of farmers and even agricultural banks. In view of the mounting drought risks confronting other countries, such an exemplary risk management system takes on great significance”, said Torsten Jeworrek, member of Munich Re’s Board of Management.

Drought is a growing risk that the alternative reinsurance markets and third-party capital has one eye on. As drought exposures grow, and losses increase which at the moment seems inevitable, the types of structures used in the collateralized reinsurance market seem likely to come into play. Indices, derivatives and possibly catastrophe bonds all seem like suitable instruments and tools to help insurers and reinsurers offload the risks of drought, and other growing threats, to new sources of capital.

Of course, drought is just a small contributor to the total global losses from natural catastrophe events and Munich Re’s report looks at the catastrophe loss experience of 2012 in more detail.

In 2012 Munich Re’s Natcatservice recorded 905 natural catastrophe events, which between them caused economic losses of $170 billion. Of those economic losses around $70 billion were covered by insurance. Losses were slightly above the ten-year average, according to Munich Re, but a lot lower than those experienced in 2011.

The U.S. bore the majority of the worldwide natural catastrophe losses in 2012, with about 90% of insured losses in the country which is much higher than the more typical average of 70%. Hurricane Sandy was of course a major contributor to the U.S. loss toll, with it responsible for $65 billion of economic losses and $30 billion of insured losses according to Munich Re.

Out of the 905 catastrophe events, 840 (93%) were weather related, with the remaining 7% caused by geo-disasters such as volcanoes and earthquakes. This split is different to the 1980 to 2011 average which more typically sees 86% weather related disasters and 14% geophysical disaster events.

Here are some key charts from the report showing the natural catastrophe loss experience of 2012: 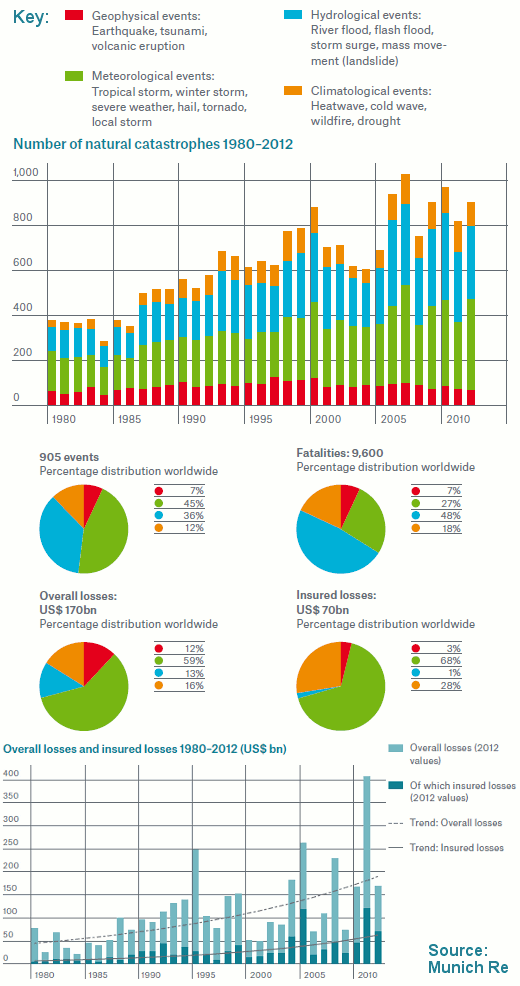 You can access the full report from Munich Re via the publications page on its website here.