According to industry association the Insurance Information Institute (Triple-I), it is demographic changes and the build-up of exposures in catastrophe exposed regions of the United States that are driving higher industry catastrophe losses, not weather or climate change.

Hurricanes, typhoons and cyclones are a significant driver of these losses, but the Triple-I says it’s largely down to population and exposure build-up in exposed regions of the world.

“While it’s tempting to ascribe the increased losses to climate change, the available data doesn’t support that conclusion. In fact, recent research indicates that tropical cyclones (the umbrella term for hurricanes, typhoons, and cyclones) have actually decreased in both number and accumulated cyclone energy over the past 30 years,” the Triple-I said.

The organisation cites well-known hurricane forecaster and meteorological scientist Dr. Phil Klotzbach of Colorado State University, a co-lead author of a Triple-I study, who commented, “We attribute this decreasing global trend to the shift toward a more La Niña-like basic state in the overall tropical climate.”

However, while there may be fewer tropical cyclones occurring, the damage they cause is increasing, and so too the quantum of industry losses faced by insurance, reinsurance and ILS markets.

This is, “Mainly because more people have been moving into harm’s way since the 1940s, and Census Bureau data show that homes being built are bigger and more expensive than before,” the Triple-I explains.

Adding that, “With bigger homes filled with more valuables and replacement costs on the rise, the data suggests that demographic changes play a greater role in catastrophe- related claims and losses than weather and climate do.”

So values-at-risk are rising fast, thanks to a population shift towards the coast, as well as the rising value of coastal properties which put more dollars in hurricanes and cyclones way.

The Triple-I also notes how hurricanes and cyclones are changing though, saying, “While hurricanes may not be more frequent or significantly more intense, they do appear to be getting wetter. While wind speeds and storm surge in coastal areas grab headlines, inland flooding is on the rise.”

Looking at changes in National Flood Insurance Program (NFIP) claims over the past two decades, you can see how demographic shifts are adjusting the claims picture from hurricanes, while at the same time flood claims are on the rise. 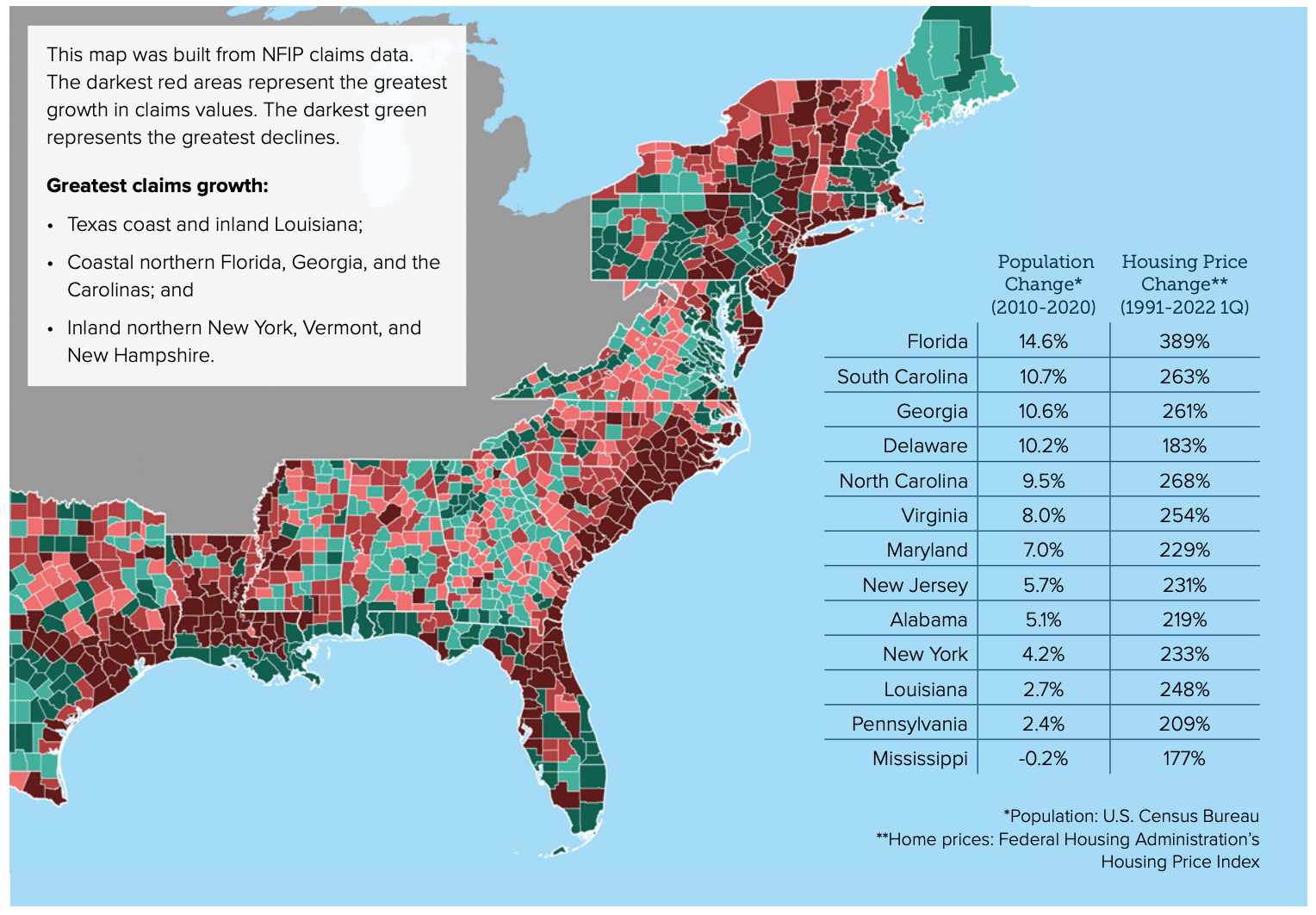 Summing up the impacts of more costly cyclones, Triple-I explained, “Insured losses from hurricanes have risen over the past 15 years as hurricane activity has intensified. When adjusted for inflation, nine of the 10 costliest hurricanes in U.S. history have struck since 2005. In addition to increased storm activity, coastal construction has continued, and property values risen, resulting in higher loss exposure.”

Improved building codes would help and Triple-I cites a FEMA study that found, “In California and Florida alone, adopting and enforcing modern codes over the past 20 years indicate a long-term average future savings of $1 billion per year.”

With Florida leading the way, a state where hurricane claims have also been exacerbated by litigation and fraud, it’s clear this move to the coast has become a driver of not just immediate damage claims, but also the lengthy tail of loss amplification and loss creep that we’ve seen in recent years.