The insurance and reinsurance industry loss caused by extra-tropical cyclone (or European windstorm) Thomas (which was also known as Doris in the UK) has been finalised at EUR 248 million by catastrophe loss data aggregator PERILS AG. 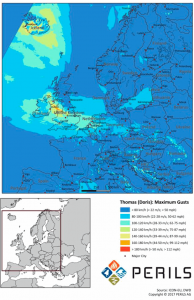 The fourth and final such loss estimate from PERILS, the figure has moved very slightly from the third estimate of EUR 249 million. The industry loss estimates for windstorm Thomas / Doris have shown little movement in recent weeks, it appears.

Windstorm Thomas (Doris) hit the British Isles, Netherlands, Belgium and Germany on the 23rd and 24th February 2017, with maximum wind gusts as high as 152km/h recorded in the UK and 150km/h in Germany, causing property and other insurable interest damage. Most of the losses were seen in the UK and Germany.

PERILS said that its insurance and reinsurance industry loss numbers for Thomas are based on ultimate gross loss data collected from affected insurance companies, with data made available per CRESTA zone (two-digit postcode) and per property line of business, together with loss ratios and wind speed data at the same resolution.

It’s been a busy European windstorm season for PERILS in winter 2018/18, with now four storms so far having qualified for reporting, with another six that did not qualify and windstorm Friederike still under investigation.