The parametric Pacific Island catastrophe risk insurance and reinsurance pooling initiative, the Pacific Catastrophe Risk Insurance Pilot, may have been triggered by Cyclone Pam which made a direct hit on Vanuatu as a strong Category 5 storm.

Update: The World Bank explained in a statement made on the 15th March:

Given the intensity of the event and reports of severe damage, the World Bank is exploring the possibility of a rapid insurance payout to the Government of Vanuatu under the Pacific Disaster Risk Financing Insurance Program (PCRAFI).

The Pacific risk pooling facility was launched with the support of the Japanese Government, the World Bank, the Secretariat of the Pacific Community (SPC) and the Global Facility for Disaster Reduction and Recovery (GFDRR), providing its member states with a vital source of post-disaster recovery capacity and financial liquidity. 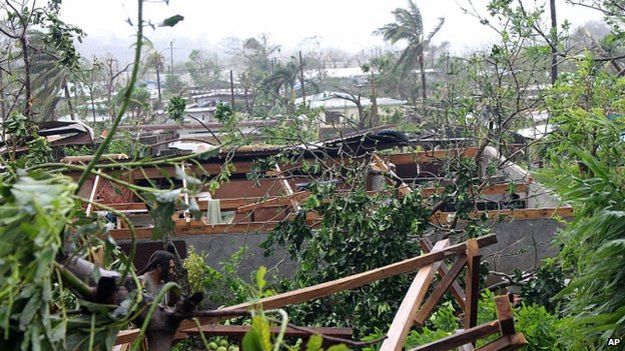 Cyclone Pam struck Vanuatu yesterday as a category 5 cyclone with wind speeds estimated at 250kmh or higher at the core with gusts above that. The damage suffered has been extensive and tragically a number of lives have been lost in Vanuatu. The capital Port Vila has been particularly badly hit, according to reports.

The current members of the Pacific Islands catastrophe risk insurance facility, after its most recent renewal, are the Cook Islands, Marshall Islands, Samoa, Tonga, and Vanuatu. Vanuatu has been hit a devastating blow by cyclone Pam, which given the extent of damage shown by early photographs and footage would look to be exactly the kind of catastrophe event that the facility is designed to provide risk transfer and financing for.

The project was implemented under the Pacific Catastrophe Risk Assessment and Financing Initiative (PCRAFI), and utilises parameters of actual events but takes a  modelled loss approach to defining whether it has been triggered.

Risk modeller AIR Worldwide is the calculation agent for the pilot facility, taking the event parameters and running them through a model to derive an event view which will then be compared to the trigger to see if a payout is required to be made.

Some details on the facility from a previous Artemis article:

The parametric policies do not pay on actual losses incurred, rather a modelled loss approach based on the parametric measurements of the severity of the catastrophe event will calculate the attachment return period and how much payout is due. Catastrophe risk models have been developed to create event footprints which will enable calculation of losses. A risk modelling firm will be expected to undertake a calculation within 10 days of receiving a calculation notice.

Technical parameters of a catastrophe event will be used to denote severity and whether the parametric triggers are breached. Wind speed measurements will be used for tropical cyclone and ground motion readings for earthquake risks. Risk modelling firm AIR Worldwide have developed a catastrophe risk model which will be used to calculate estimated losses against which payouts will be calculated and made. This will enable quick payouts which can be used directly for disaster recovery purposes. The World Bank said payouts could be as quick as two to three weeks after a catastrophe event strikes.

The risk from the participating Pacific Island nations is pooled into a single diversified portfolio and then transferred to the global reinsurance markets, in typical risk pooling fashion. By pooling the risks together a more attractive price for transferring the risk can be secured from reinsurance markets, making the underlying policies more affordable for the participating nations.

At this stage it is not possible to say whether the facility has definitely been triggered, however given the wind speeds experienced in Vanuatu, estimated at 250kmh at the core when the storm impacted the islands, and the devastation that is evident from footage coming out of Vanuatu today, it would seem extremely likely that a payout will be made.

Vanuatu is estimated to suffer damages from natural disasters that reduce its GDP by around 6.5% per year, on a modelled basis, showing the exposure that this Pacific Island nation has to cyclones and earthquakes.

Vanuatu currently has $9.9m of coverage under the Pacific catastrophe pilot facility, according to World Bank documents. How much a payout would amount to is likely to depend on the event parameters and how the model interprets the modelled loss.

With a 10 day maximum calculation period, which could be much shorter given the severe nature of cyclone Pam and the high profile nature of the loss, it is possible that an announcement on a payout could be made quite quickly by the World Bank. Artemis will update readers if any payout is announced.

The Solomon Islands have also been hit by Cyclone Pam, with reports of severe damage, but it had pulled out of the catastrophe risk pilot before the last renewal, after it suffered two catastrophes for which the facility was not triggered.

This is unfortunate, but demonstrates how difficult it can be designing facilities that will cover all possible event variations. The Caribbean Catastrophe Risk Insurance Facility faced some criticism when it launched after some tropical storms did not trigger the facilities policies, but caused significant damage. The CCRIF responded by developing the excess rainfall products to cover events that caused most damage from rain and flooding, rather than wind speeds.

The Pacific Catastrophe Risk Insurance Pilot is also planning to respond to the Solomon Island exit, saying that it has “created the impetus to develop new DRFI (Disaster Risk Financing & Insurance) tools to cover these layers of risk.”

The whole objective of the Pacific catastrophe pilot is to “ascertain the viability of market-based sovereign catastrophe risk transfer instruments to reduce the financial vulnerability to natural disasters (earthquakes and tropical cyclones)” of its members. Tragic events like Cyclone Pam’s hit on Vanuatu are its chance to show how rapidly a parametric facility can respond and distribute financing post-event and the value it can add to disaster response and recovery.

The timing of this catastrophe is certain to concentrate the minds of those attending the Third UN World Conference on Disaster Risk Reduction in Sendai, Japan this weekend and over the coming days. Representatives of 190 countries are attending to discuss disaster risk, response, mitigation, resilience and recovery, but the case of cyclone Pam and Vanuatu could also raise risk transfer and financing to the fore in these important discussions.

It’s vital that risk financing facilities prove their worth and payout when tested by severe events. The Pacific Catastrophe Risk Insurance Pilot has already paid out once, to Tonga after cyclone Ian in January 2014, and now has a chance to demonstrate the value that risk pooling, transfer and financing provides, by providing liquidity and funding post-disaster to aid Vanuatu with recovery and re-building after Cyclone Pam.