Severe tropical cyclone Ita is nearing the Australian north Queensland coastline and the approach of Ita has given the catastrophe bond market enough cause for concern to keep an eye on the Category 5 cyclone’s path.

Update Friday 11th April, 10:00am BST: Here’s a visible image of Cyclone Ita as it makes landfall on the Queensland coastline. 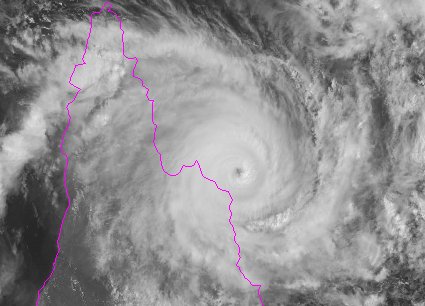 Update Friday 11th April, 9:00am BST: Cyclone Ita has weakened slightly to a Category 4 storm, with maximum wind gusts of 275km/h, 10 minutes winds of 195km/h and a central pressure of 940hPa at the latest report from the Australian Bureau of Meteorology.

Cyclone Ita’s track has moved a little further to the east, taking it closer to larger cities such as Cairns, but still forecast to move inland and weaken before it reaches that area. The track is going to be crucial to the extent of insured losses from the storm, should Ita skirt the coast insurance sector losses could be much higher as wind speeds may be maintained for longer.

Cyclone Ita intensified earlier today into a top category 5 cyclone, with winds expected to exceed 285km/h in the center of the cyclone at landfall if Ita does not show any weakening before that occurs. At the latest report cyclone Ita was situated around 350km off the far north Queensland coastline with landfall expected at 7pm local time tomorrow just north of Cooktown.

Cyclone Ita is a smaller storm than other recent major cyclones to have struck the area, like Yasi in 2011 and Larry in 2006, however of note for insurers, reinsurers and the catastrophe bond market is the fact that Ita is a slower moving storm currently, which could result in more impact as strong winds remain over the track for longer.

As you can see from the forecast path graphic above, cyclone Ita is expected to make landfall then move inland, before recurving back towards the coastline again. If Ita follows that exact path, far from guaranteed, it would miss some of the larger population centers such as Cairns. However any change to that path could affect the ultimate insured losses from the storm greatly.

The major concerns from cyclone Ita aside from the devastating wind potential of a category 5 storm, are an expected storm surge which is forecast to raise sea levels by around 1.5m and with high tide near the time of expected landfall surge could become a major factor.

The other concerns are an expected rainfall total well into the 100’s of mm’s, according to Australian weather forecasters, which could raise river and creek levels enough to cause flooding. The other key concern is flying debris, a real risk from a storm of this intensity.

All of these cat bonds are potentially exposed to losses from cyclone Ita, should the storm result in a sufficiently severe impact on Australia. However, it is worth noting that the current forecast would make any of these cat bonds being triggered very unlikely, given the low insurance exposure levels in the region that Ita is expected to traverse. Of course, storm tracks can change suddenly, another reason for keeping an eye on this storm.

The two Munich Re cat bonds which are potentially exposed use a modelled industry loss index trigger, which makes forecasting their chance of loss extremely difficult without access to the model run and the actual storm track and intensity, which won’t of course be known till after the storm hit.

The VenTerra Re cat bond uses an indemnity trigger, so this cat bond is exposed to the actual losses suffered by QBE Insurance Group from a catastrophe event. QBE has reportedly been limiting premium growth in Queensland, due to its exposure to cyclones. Also the attachment point for Australian cyclone risk for VenTerra Re is AUD$4.25 billion (just under USD$4 billion) and that would require a major event to strike a key Australian city it is assumed.

The cat bond secondary market has seen some speculative bid and offer action today, as a result of approaching cyclone Ita. Artemis has spoken to a number of ILS market sources and while currently it seems that none of these exposed cat bonds have actually been traded, there have been bids at levels as low as 50 cents on the dollar from speculative traders we’re told.

Artemis also understands that there are offers to sell at levels below where these cat bonds have been priced in recent days and weeks at around par, but not likely at levels low enough to interest any speculative or live-cat type trades.

Investors and ILS investment managers are monitoring the situation as cyclone Ita approaches. The consensus currently is that if Ita follows the latest forecasts then the concentrations of insured values in the storm’s path are not going to be sufficient to trigger any exposed catastrophe bonds.

Of course while there may not be any impact to catastrophe bonds there is no guarantee that reinsurance losses won’t emerge and that could mean some participation from collateralized reinsurance covers provided by ILS managers and third-party capital units of reinsurers.

Currently Ita looks more likely to be a reinsurance market event than a catastrophe bond market event, however things can change rapidly and we advise you keep an eye on the forecasts and information from the Australian Bureau of Meteorology here.