After an impactful month of August, analyst firm Jefferies believes that insured catastrophe and weather losses are running above average and that for most insurance and reinsurance firms they will now be ahead of budgets in 2020.

Jefferies team has analysed severe weather and catastrophe activity through the year so far and estimated its cost to insurance and reinsurance markets.

The firm believes that while August saw a costly month of hurricane and tropical storm activity for re/insurers, severe weather has added just as much in the way of losses as well.

The combination of numerous tropical cyclones and hurricanes, plus impactful U.S. severe weather, has led to August catastrophe losses that were far above the long-term average, by Jefferies reckoning. 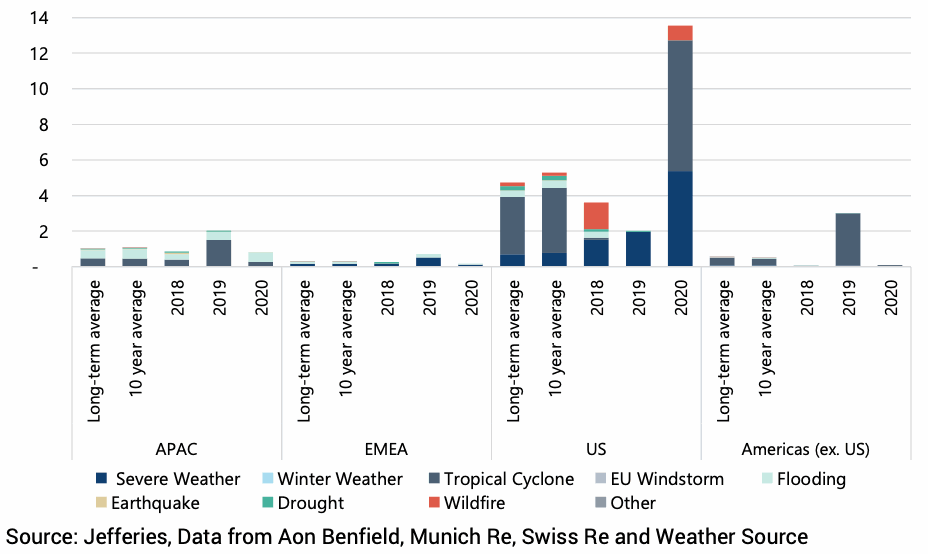 Jefferies analysis puts August catastrophe and severe weather losses for the insurance and reinsurance industry at over $13 billion, a significant amount for a single month.

However, it’s worth noting that the wildfire losses look a little on the low side, considering estimates are increasingly rising for the insurance and reinsurance industry toll.

“Windstorm losses aside, we estimate that severe weather (non-cyclone related rainfall) in the US was far above both the long-term average and recent years (2018 and 2019). Given that these storms have a far lower profile, it’s our view that this high aggregation of lower severity events is more likely to be overlooked by consensus when establishing forecasts,” the analysts explained.

Of course, it is this aggregation of smaller, severe weather loss events, on top of the now multiple U.S. tropical storm and hurricane landfalls, that can erode reinsurance layers and aggregate retention.

While none of the hurricanes have caused really major losses so far this season, the numbers are mounting and alongside other weather events and catastrophes like the wildfires in California and Oregon, the chances of losses flowing into reinsurance and of course insurance-linked securities (ILS) markets is growing.

Losses year-to-date in 2020 are actually 13% above the long-term average, with severe weather and hurricanes driving the largest shares.

In fact, severe weather and cyclones are now 61% and 109% above the 10-year average respectively, the analysts explained.

“Overall, this leads us to conclude that updated corporate forecasts should include catastrophe loss ratio estimates (ex-COVID-19) that are marginally above budgets – which in turn appears to be slightly negative relative to consensus,” they said.

Jefferies analysis finds that rainfall, wind and temperature are all running ahead of averages as well, implying a more impactful month of August.

The annual average for insured catastrophe losses is around $73 billion, Jefferies said.

But in 2020 so far, the total is already close to $50 billion, suggesting a strong chance of the full-year tally for 2020 going above the averages. 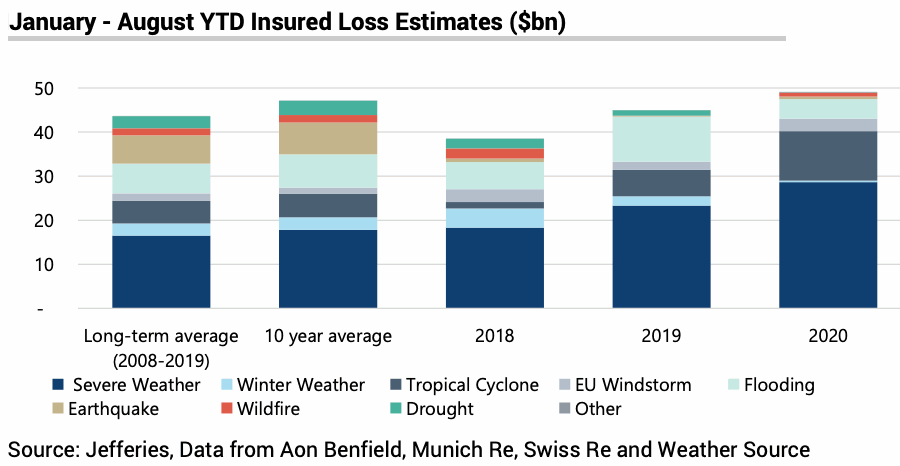 “Historically, severe weather has been a frequent event in the US so we expect to see high insured losses particularly as more extreme weather trends develop in the region in the coming years,” Jefferies analysts said.