U.S. commercial P&C rates declined by an average 2% during April, continuing the slight deceleration witnessed in March when compared with the -4% declines in previous months, according to MarketScout and Keefe, Bruyette & Woods (KBW).

“It seems we may have a reversal of sentiment. Rates are moderating. We are only seven months into a soft market that has so far yielded a maximum composite rate decrease of minus 4 percent.

“This soft market may be limited in length and severity. A limited soft market would be a bit surprising noting the current ample market capacity; however, more sophisticated underwriting tools seem to be limiting market swings,” said Kerr.

It’s not surprising to hear Kerr warn that the soft market isn’t likely to end anytime soon, and it’s also possible that rate movements will decline further year-on-year in coming months as pressures in the reinsurance market, and the benign loss landscape continue to impact primary lines.

“We were surprised by the sequential improvement (which really doesn’t match 1Q16 conference call rhetoric), and we still expect low-to mid-single-digit decreases in the balance of 2016.

“We’ll obviously monitor this, but we expect this deceleration to quickly fade, similar to past fluctuations,” said KBW. 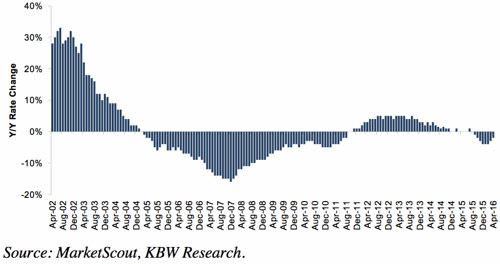 Rate movements by account size improved for all categories when compared with the previous month, with small (up to $25,000) sized accounts showing a 1% decline, compared with -3% in March.

As well as by account size MarketScout also provided data on rate movements during the month by coverage class, which reveals that during April commercial property and professional liability witnessed the steepest declines of 3%.

Crime, EPLI, and general liability lines all remained flat during the month, with the remaining coverage classes seeing rates decline by 1% or 2% in April.

Two months of deceleration does suggest more disciplined and sophisticated underwriting, as noted by Kerr, with players seemingly refusing to be pushed too far on pricing and increasingly knowing when to walk away from certain business.

However, MarketScout and KBW both expect this to be short-lived, and feel that this doesn’t represent a shift from the softening landscape.