Cat risk is core to investor portfolios, but relative value key: Swiss Re

When allocating investment strategies, capital markets investors have choices that might be influenced by the relative attractiveness of the cat bond sector, however, the aftermath of 2017 events shows how cat risk is a key part of investor-portfolio construction, according to reinsurance giant Swiss Re.

Catastrophe bond spreads steadily declined to pre-hurricane Harvey, Irma, and Maria levels during the first-half of 2018, with mild tightening being consistent throughout the insurance-linked securities (ILS) asset class, says Swiss Re, in its H1 2018 ILS market update.

At the same time, the reinsurer notes that High Yield spreads have been pretty volatile and have actually trended wider, which is in part a response to the pressures of an investment environment experiencing rising interest rates.

With this in mind, Swiss Re questions whether the ILS market will surrender to similar pressures, noting that it is already seeing some evidence of this.

Of course, one of the key attractions of ILS as an asset class is its very low correlation with wider financial market volatility.

However, while catastrophe bonds are somewhat immune from changes to interest rates as they utilise a floating-rate structure, capital markets investors do have choices when allocating capital, which could bring the relative attractiveness of the cat bond market into question.

Swiss Re states that should the relative attractiveness of the cat bond market fade, investors could look to rebalance their exposures, and ultimately allocate capital elsewhere.

Looking at it from the other end, Swiss Re notes that the perceived growing risk in the High Yield sector might well be enough to maintain the supply of capital that continues to enter the cat bond market.

“One thing is certain, the aftermath of HIM has proven that cat is a core part of investor-portfolio construction. We will pay close attention to how this plays out in the second half,” says Swiss Re.

As well as low correlation with broader financial market trends, the diversification offered by the ILS space is seen as very attractive by the investment community. And, the response of the market to 2017 catastrophe events shows that investors are both willing and able to pay losses when they do arise, and that they are still committed to the space despite 2017 being the costliest catastrophe loss year on record for global insurance and reinsurance.

In order to illustrate relative value, Swiss Re has plotted spreads of the BofA Merrill Lynch High Yield Corporate Indices against the equivalent of BB-rated and B-rated cat bond spreads, which reflects a mild tightening in the ILS space, as shown by the chart below, provided by Swiss Re. 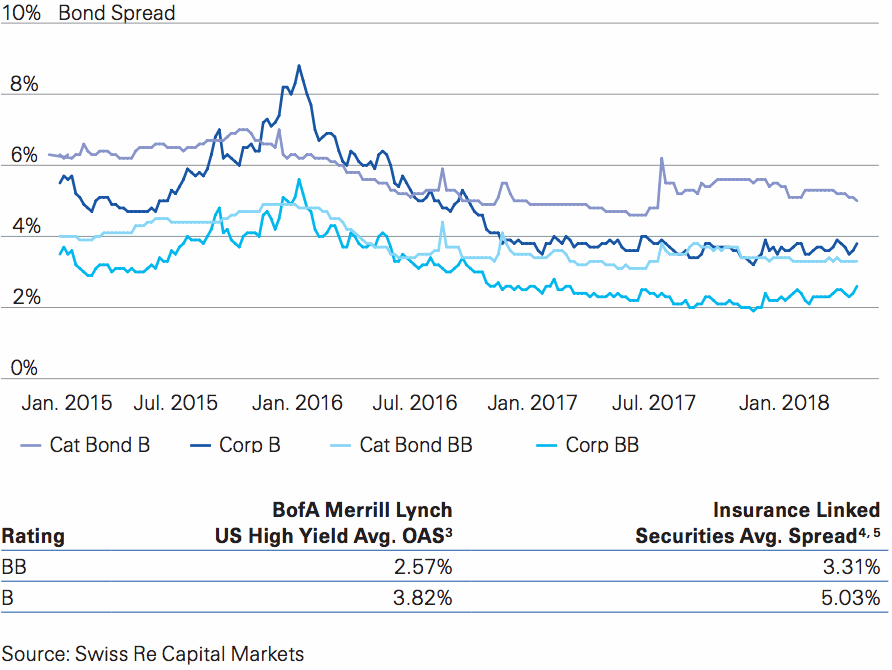 As the reinsurance firm explains, the above shows a return to where the two markets were relative to each other prior 2017 catastrophe events.