The catastrophe bond market is entering an exciting phase and likely to play an increasingly important role in natural catastrophe risks and reinsurance capital, but this will only be achievable if deals are placed on investors’ terms, the Credit Suisse Insurance Linked Strategies (ILS) team has explained.

In the wake of hurricane Ian, catastrophe bond market participants are anticipating further increases in the price paid by cedents for reinsurance and retrocession coverage.

With traditional reinsurance capacity having already declined over the last year and now further dented after hurricane Ian, the expectation is that “the alternative risk-transfer (via Cat Bonds) will become increasingly more important.”

As a result, the Credit Suisse ILS team state, “We expect a strong pipeline of new transactions. However, these will only be able to be placed on investors’ terms.”

In part, this is the need to recover losses after hurricane Ian, as well as recent loss year’s where they may not have been recovered as fully as investors would have liked.

But, just as important, “The strong pursuit for sustainable returns on capital for Cat Bond investors over the long term (considering topics like inflation or climate change) will dominate the pricing discussions,” Credit Suisse’s ILS team believe.

“In general, it can be said that the entire industry is on the verge of an upheaval, which can offer interesting market opportunities for Cat Bond investors,” they believe.

In order for the catastrophe bond market to play the much more important role in providing capital to support catastrophe, weather and climate related risks, that Credit Suisse believes it can, investor needs must be met, which will include a “push for higher premiums and clearer structures.”

While there is some uncertainty over how premiums develop and how cat bond coverage can remain affordable, the CS ILS team say that right now, “The market dynamics are very high and could lead to opportunities in the Cat Bond market from an investor’s point of view.”

Given there is an expectation for “rising coupons” and also increasing issuance volume, the Credit Suisse ILS team believe that, “The Cat Bond market is entering a particularly exciting market momentum.”

On top of this, the variable yield structure of cat bonds means the risk-free rate has been increasing, which will further drive up return expectations within the cat bond market.

They explain that, “On the one hand, the difficult, loss-making years for the insurance market have underscored the need for and importance of the alternative risk transfer (i.e., the Cat Bond market). On the other hand, Cat Bond investors have also learned from these events and increasingly seeking higher coupons and more favorable terms and conditions. The market has clearly moved from a seller’s market to a buyer’s market.”

Which is key as a driver of increasing yield spreads for new catastrophe bond issuance, something we’re already seeing with the latest cat bond transactions to come to market that are documented in our Deal Directory.

Which brings us to spread developments, an area that the Credit Suisse ILS team are forecasting could continue to move higher. 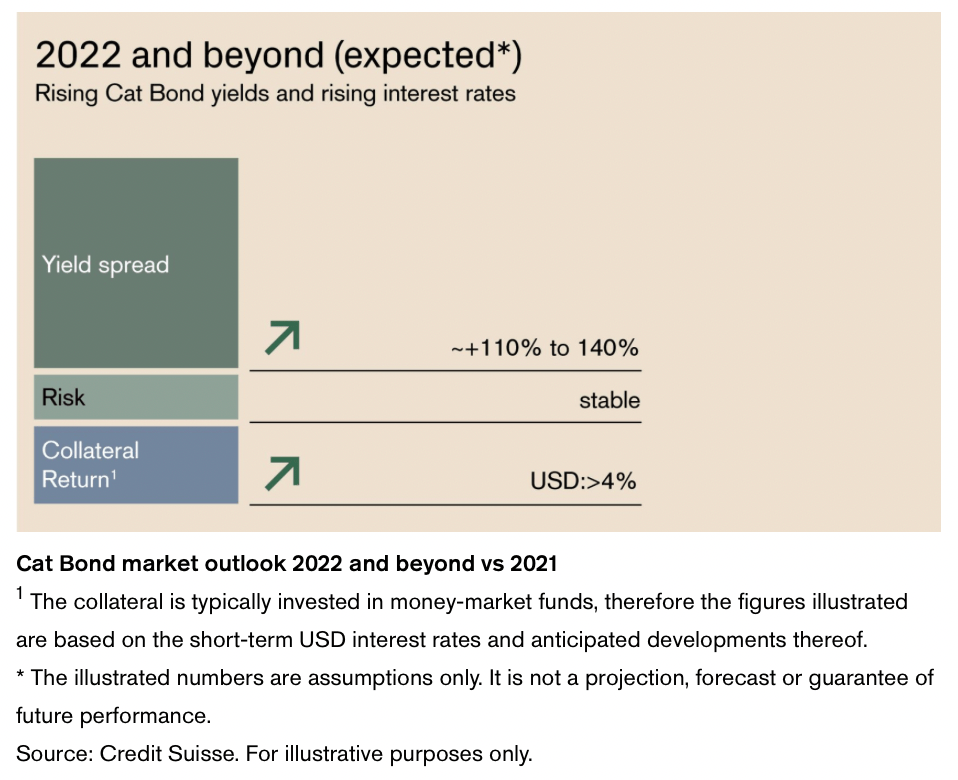 Already, as of the second-quarter of 2022, the Credit Suisse ILS team estimate that yield spreads were up roughly 60% over the previous year.

Looking forwards, the Credit Suisse ILS team say that they “expect a further increase of approximately 50-80% in 2023.”

That’s in addition to the now up to 4% yields possible from some collateral assets, meaning the overall return on an investment in catastrophe bonds could be significantly higher, over a less than two year period of data.

“The extent of the final premium increase will depend primarily on the ultimate losses caused by Hurricane Ian and the level of demand or inflow of new capital into the Cat Bond market.

“In addition to rising risk premiums, also the collateral return, which is generally invested in money-market funds, has risen sharply in the face of the increasing interest rates, and is expected to rise even further, bringing the total return of new Cat Bonds likely to new high,” Credit Suisse’s ILS team explained.

All of which makes for another bullish outlook from an asset manager particularly active in the ILS and cat bond space, but as with others, Credit Suisse is right to firmly highlight the need for investors to be compensated adequately for the risks they assume going forwards.