Despite a record-breaking start to the year catastrophe bond and ILS issuance contracted in the first-half of 2016, as issuance levels failed to keep up with high levels of demand, ultimately leading to reduced pricing and the tightening of secondary market spreads, according to Swiss Re.

Reinsurance giant Swiss Re, in its latest insurance-linked securities (ILS) market update report underlines the impressive start to the year for the cat bond and ILS space, as Q1 2016 issuance volumes broke records.

But as evidenced in the Artemis Q2 2016 Catastrophe Bond & ILS Market report, and emphasised now by the reinsurance firm, issuance levels from April through June failed to keep up with investor demand and the outstanding market size shrank from the $26.5 billion+ witnessed at the end of March 2016.

Swiss Re notes that the market continued to expand its reach in terms of the investor base, and a number of new UCITS (Undertaking for Collective Investment in Transferable Securities) funds entered the space during the first-half of 2016 (such as by Securis and Leadenhall), adding to ILS market capital.

At the same time, existing investors were eager to deploy funds as it became clear that issuance levels in H1 would struggle to keep up with the large volume of maturities, says Swiss Re.

Furthermore, continued high levels of demand from new and existing investors, in combination with a lack of new issuance, pushed down pricing in the sector during H1, a trend that has been apparent for several quarters now.

The quarterly Artemis Catastrophe Bond & ILS Market reports through 2015 and so far this year, show how pricing of new cat bond & ILS issuance continues to decline, underlined by the steady reduction of the pricing multiple (price coupon divided by expected loss) during the last 12-18 months.

The above-mentioned factors, “among others, led to a strong contraction in secondary spreads over the course of 1H 2016,” said Swiss Re. 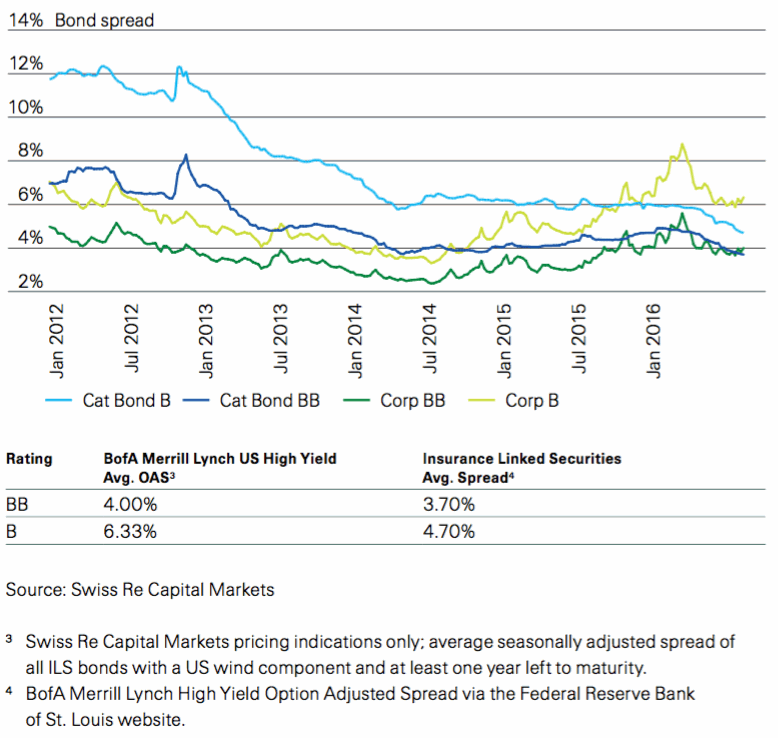 The above chart provided by Swiss Re shows cat bond spread movements since January 2012, highlighting the decline of recent years but also showing stability in Q1 2016, “while other markets were seeing significant volatility and spread-widening forces.”

Swiss Re explains “increased volatility in other sectors,” and secondary market trading movements during H1 in pre and post the Brexit vote (which the ILS market appeared to be unfazed by), “further reinforces the diversification value of ILS.” 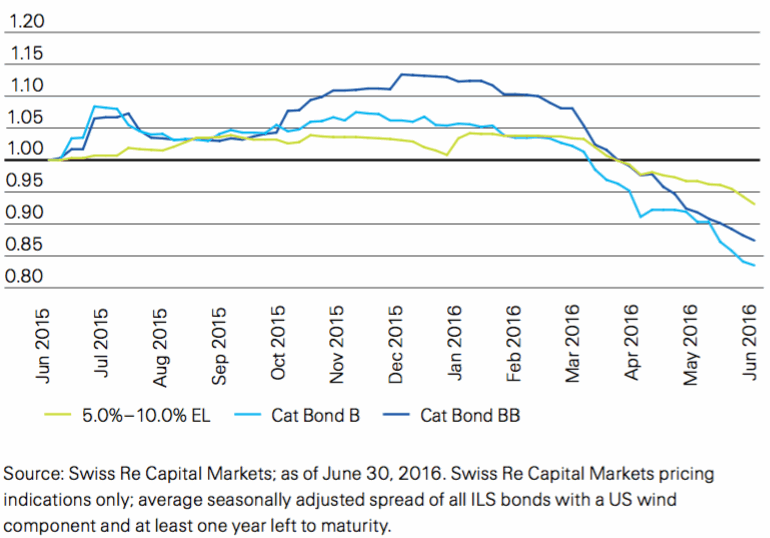 The above chart, again provided by reinsurance giant Swiss Re, shows how towards the end of Q1 and throughout the second-quarter, secondary market cat bond spreads tightened considerably as demand intensified.

“Toward the end of 1Q and into 2Q, as rumors of light pipelines abounded and new funds entered the market, investor sentiment shifted drastically and the ILS market became almost entirely one-sided, with significant buy interest across the spectrum of risks and perils,” said Swiss Re.

Discussing secondary cat bond market trading for the remainder of the year, Swiss Re said, “Barring any severe catastrophic events we expect prices to level off as we move through the U.S. wind season and as we once again approach minimum yield hurdles.

“In the short term, trading should remain fairly benign despite significant demand for bonds, due to sellers’ inability to replace paper. As we exit the wind season we expect to see more trading as a result of more expected activity in the primary markets with sponsors potentially looking to take advantage of favourable issuance conditions,” continued Swiss Re.

It’s promising to see continued demand for both primary and secondary cat bond and ILS transactions, especially during times of wider financial market volatility and potential disruptive forces, such as Brexit.

This underlines the valuable diversifying and uncorrelated benefits the ILS asset class offers, and that investors are comfortable with the asset class despite lower returns and the tightening of spreads in the secondary market.

The full report from Swiss Re can be downloaded here.